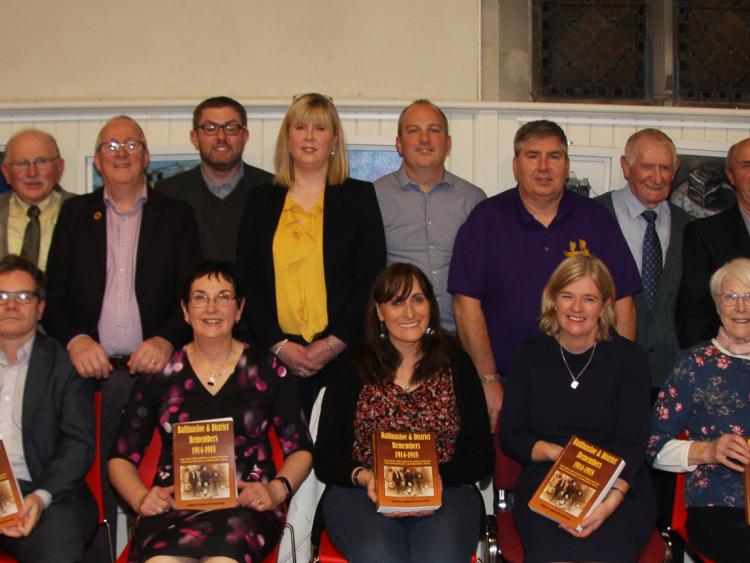 The exhibition opened on Tuesday with visits from 80 pupils from Gael Scoil
Uí Cheithearnaigh and continued through the week with attendance of groups from Ard Scoil
Mhuire, Attyrory NS, Clonfert NS and Clontuskert NS.

Each group were introduced to the Roll of Honour in the History Room and were given a
detailed history by Gerry Devlin of the journey of restoration and housing of the piece.

All of the school children and teachers enjoyed the military exhibition and the hands on
experience with the uniforms and artefacts provided by the Irish Military War Museum, Gerard
O’Meara, Anthony Merrigan of Athlone Historical Society and Loughrea History Group. Aidan
Darcy was on hand to show the children the various memorabilia on display and to give talks on
the many aspects of a soldier’s life. Talks were also given by Douglas Rafter and Renate
Kohlmann. Children got the opportunity to wear uniforms and kit worn by the soldiers. Ivan
O’Grady was on board to show how it was 100 years ago and had a hand embroidered tapestry
stitched by his great grandfather, Michael Hillary, bearing the flags and names of the places he
had served and also displaying two family photos. Ivan showed the death plaque issued to
Michael Hillary’s family after his death.

On Tuesday evening a book entitled Ballinasloe &amp; District Remembers 1914-1918 produced by
Ballinasloe WW1 Heritage Group, was officially launched by well-known author and Irish
Times Journalist, Ronan McGreevy. The evening began with a visit to the Roll of Honour on the
ground floor then proceeded to the Church Gallery of the library for the military exhibition and
launch.

Proceedings began with Private Niall Kelly who played the pipes as he made his way through the
crowded room. MC Brian Casey introduced the guests, beginning with Jimmy Stone who sang
Calling Down the Line followed by piper Pte. Niall Kelly.

Killure man and local poet Michael Glynn, otherwise known as “The Man With the Cap” recited
a poem, A Letter to the Front, which he had written especially for the book.

Brendan Smith of the Insight Centre for Data Analytics at NUI Galway told us of the food and
drink of front line troops, he showed some cameras and said that we would not have all the great
photos of the time without these. He also spoke of the huge advances in electronic
communications technology during the war years, the rise of popular music, the promotion of
drugs by warring states, and other interesting subjects such as government secret surveillance
and censorship, racism and healthcare.

Eamon O’Donohue recited the great poem “Exposure” by Wilfred Owen. Marie Mannion,
Heritage Officer with Galway County Council spoke very highly of the group. She said that
without the foresight of Douglas Rafter who realised the significance of the Roll of Honour and
was instrumental in the restoration of same, we would not have the project completed and the
publication of the book. She outlined her visits and meetings with the group and the steady
progress they had made over the period of five years and beyond as they had the Roll of Honour
restored, the research of those 88 names and the continued exploring of all others found during
research. She complimented Gerry Devlin on the wonderfully designed cover of the book and all
the members for their dedication and hard work to get it to publication.

Ronan McGreevy well known author and Irish Times Journalist launched the book and praised
the group for one of the best local history books he had come across. He outlined that the number
of people from the locality who went to war, would equate to all of the local Senior, Intermediate
and Junior squads of players in hurling, football and the ladies GAA.

Brian Casey thanked all who attended and complimented all those involved in the project and
book launch.

Sean Glennon from Fohenagh gave a most moving rendition of the song “Christmas 1915 in No
Man’s Land” and finished off singing it in German.

Proceedings came to an end with members of Ballinasloe Town Band Martina Doherty, Evan
Rafter and Damian Ó Neachtain playing The Last Post which was a very fitting close to the
evening.

Many people brought along medals and memorabilia which belonged to their ancestors who
served in The Great War. Ballinasloe native and artist Des O’Regan displayed a beautiful
painting of Matt Maroney, he created especially for the centenary of the Armistice.

The restored Roll of Honour can be viewed in the History Room at Ballinasloe Library.The book
entitled Ballinasloe &amp; District Remembers 1914-1918 is available for sale locally in Salmon’s,
Main Street, Ballinasloe and Kelly’s Shop, Brackernagh, Ballinasloe, Moran’s Shop,
Shannonbridge Charlie Byrne’s Bookstore, Galway and Kenny’s Bookstore, Liosban Industrial
Estate, Galway where it can be purchased on line to send anywhere in the world shipping free at
www.kennys.ie

Ballinasloe WW1 Heritage Group would like to thank everyone who attended their book launch,
the teachers and pupils of the schools and members of the public who visited the exhibition.
They also wish to thank all those who have supported them along the way, the sponsors, all who
helped set up the military exhibition and those who took part in the line up to the official launch
by Ronan McGreevy, including refreshments by Marina Downey, photographer Theo Hanley,
videographer Paul Kelly, sound engineer Mike O’Brien and KPW for the excellent job they did
with the printing of the book. A sincere thank you to the manager of Europe Direct Library
Ballinasloe, Úna Kelly and her staff Anne, Breege and Mark who were most welcoming and
accommodating during research and throughout the exhibition and book launch.

Finally a huge amount of praise goes to our researchers Evelyn & Oliver Donellan, and to Evelyn as sub editor and collaborator (with the aid of modern technology) worked with Damian Mac Con Uladh based in Greece who did an excellent job in the final editing.  This work was then forwarded to KPW who produced the highly finished and excellent publication we have today.