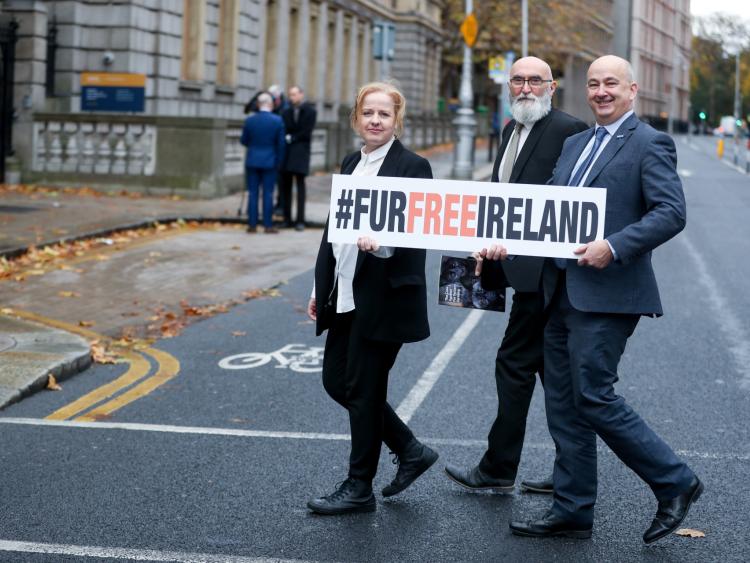 8 out of 10 people in Ireland think that fur farming should be banned!

14th November 2018, the ISPCA, and Respect for Animals, both of which are members of Fur Free Alliance, are highlighting the necessity for a ban on fur farming in Ireland on animal welfare, ethical and moral grounds and are backing a Bill recently introduced in the Dáil by Solidarity TD, Deputy Ruth Coppinger.

Today, the weight of public support for a ban on fur farming is revealed.  An opinion poll of people in Ireland conducted by Red C Research in October 2018 showed that 80% agree that farming and killing of animals for their fur in Ireland should be banned.

Mink are essentially wild animals and not suited to be kept in tiny, barren wire cages and bred intensively in fur farms simply for luxury fashion items.  The animals are deprived of the ability to exhibit normal behaviours like swimming, running, digging, foraging or hunting.  As a result, they exhibit stress related physical or behavioural symptoms (stereotypic behaviour) such as repetitive circling, fur-chewing, self-mutilation which often causes serious injuries and open wounds which can become infected.  The cages are never longer than a person’s arm to enable handlers to grab them at the time of killing.

In Ireland, there are three fur farms located in Donegal, Kerry and Laois containing up to 200,000 mink, farmed in tiny wire mesh battery cages (typically measuring 90x30x45cm) only to suffer a cruel and inhumane death by gassing. Mink are semi-aquatic and highly evolved physiologically to hold their breath so they are prone to hypoxia, which means they will potentially suffer during gassing.

Dr Andrew Kelly, ISPCA CEO said: “There is overwhelming scientific evidence that fur farming is cruel. Mink are essentially wild animals and keeping them in small cages in which they are deprived of the ability to express their normal behaviours such as swimming and foraging is not acceptable. Every year approximately 150,000 mink are killed in Ireland solely for a non-essential fashion item which is simply unacceptable. We are calling on the government to put an end to this inhumane practice. Many EU member states have already adopted legislation to prohibit or limit fur farming and we want Ireland to put an end to this barbaric practice which should be consigned to the dustbin of history.”

Mark Glover, Respect for Animals & Fur Free Alliance said: “In 2015, Respect for Animals published a comprehensive scientific review of animal welfare standards for mink on fur farms. This report found that the welfare of mink farmed for their fur is seriously compromised by ALL existing fur farming practices. It further concluded that farming systems for mink fail to satisfy any of the ‘Five Freedoms’ and do not provide a ‘Life worth Living’ as defined by the Farm Animal Welfare Council.

A ban is the only viable solution to the serious welfare concerns caused by the fur factory farming of mink. Governments around Europe are legislating to end this cruel practice, which contravenes the European Directive concerning the animals kept for farming purposes and the Council of Europe recommendation concerning fur animals. Fur farming is a disaster for animal welfare and it is clear from the opinion poll results released today that such a ban has huge support from the Irish public.”

The fur industry is keen to promote fur as a ‘green’ product, but nothing could be further from the truth.  In reality fur production is a highly chemical and energy-consumptive process. Escaped mink have a serious impact on the environment and native species and are listed in the top 100 most invasive species by the International union for Conservation of Nature