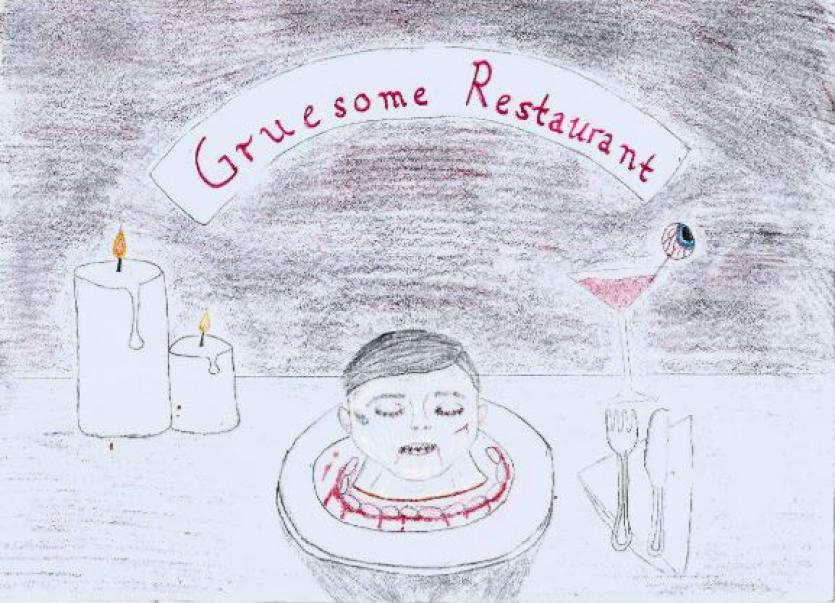 As I pulled up outside the restaurant, an eerie feeling came over me. When I walked on the cracked pavement leading up to the door I realised that this was different from any other eating establishment I had ever been to.

As I pushed the door a weird smell came over me. It was very strong. It was hard to describe. Very strange. Pungent. Faintly sweet but in an unpleasant way.

I looked around the downtrodden place. I was greeted by a man wearing a mask around the lower part of his face.

“Can I help you sir?” he asked, waiting for my response.

“Can I have a table please?” I stuttered. I couldn’t help staring at his bizarre mask.

As I pursued him to my seat I noticed a large bag being dragged towards the kitchen. It was probably nothing but I became slightly queasy as I watched more masked men drag another crimson bag into the kitchen.

“Sir?” The man said redirecting my attention back to him. “You look distressed sir, are you okay?”

“Yes, I’m fine,” I gulped a reply. He sat me down on a chair that had seen better days and left me to figure out my order.

As I was studying the moist menu I felt the need to go to the bathroom. As I walked toward the toilet door the smell got stronger, I looked down the hall.  I then heard a lot violent banging and rattling on a door.

I walked slowly towards the door and realised that the smell wasn’t the usual odour you would get at a restaurant. It didn’t appeal to the nose like frying steak or garlic or anything of the sort.

I attempted to open the door but it was locked.  I decided to cut my losses and go to the bathroom. As I strode into the dimly lit toilet, I checked my watch and realised my perception of time had sped up. The restaurant was about to close. Most bizarre! Where had the time gone?

I scooted towards the door and was about to walk out until the locked door from earlier bolted open. Out came a medium sized figure. On a squeaky trolley there were plates of very rare looking meat.

“There are still customers in the restaurant,” I said to myself. I realised that now was my chance to uncover what that mysterious smell was.

I peered into the pitch-black room and figured I was best in the dark than in the light. I felt my way around.

I eventually found another door. There was some light. Another room perhaps?  I was about to walk in when I heard an agonising scream. I recoiled in horror and tripped over something.

Crockery shattered on the hard floor.  I heard men mumbling and then suddenly a small chubby man burst out the door surveying his surroundings and seeking the origin of the din.

I tried to slow my breathing so I wouldn’t be he heard and got behind something. The man tripped over some pieces of recently shattered china and he let out a wail.

I had to move quickly. I needed to see what was going on in the room. I entered and surveyed my surroundings.

Right in front of me was a man stuffing his face with a half mangled head.

“What is wrong with you?” I answered, louder than I should have.

“Nothing at all. In fact, I should ask you why you broke into my quarters without anyone’s permission.”

“You’re eating a human being!” I screeched. I got off the ground and realised I was covered in blood.

“And what, pray tell, is wrong with that?” he asked as he struggled to chew an eyeball. He got off his knees and turned toward me. He was a tall looming figure with a growing smile across his face.

“That’s your own kind!” I darted back.

“I know he is,” he replied calmly “but what good is he to us now?” he asked in a low tone.

“He is- he-” I stuttered to say anything.

“He is a worthless piece of meat that I am making a living off!” he shouted. He rushed towards me, grinning like a maniac. I could see the remains of eye jelly and blood on his teeth. He punched me in the face.

He brought his tone back down. “What is your reason for being here anyway?” he asked slowly losing his patience with me again. I rubbed my aching jaw. I spoke slowly.

“I’m a reporter; I was wondering if I could-”

“You’re a reporter?!” he yelled at the top of his voice. “Let me tell you something friend,” he said grabbing my collar and pulling me up to meet his deathly gaze.

“I am going to kill you and I am going to enjoy doing so and I will cut all of you into little tiny pieces for me, my guests and my staff to enjoy,” he chuckled.

“You won’t get away with this, you sick freak!” I shouted.

“Oh but I already have, my dear boy.”

As the looming figure dragged Stephen Matthews away to his doom kicking and flailing, nobody heard him. Nobody heard him scream.  He was never heard from again.

Some say you can still hear the screaming echoes of all the helpless victims to this day if you visit this restaurant. Come and visit sometime… for a quick bite.