Ballymahon VS Halloween Stories: The Bunker 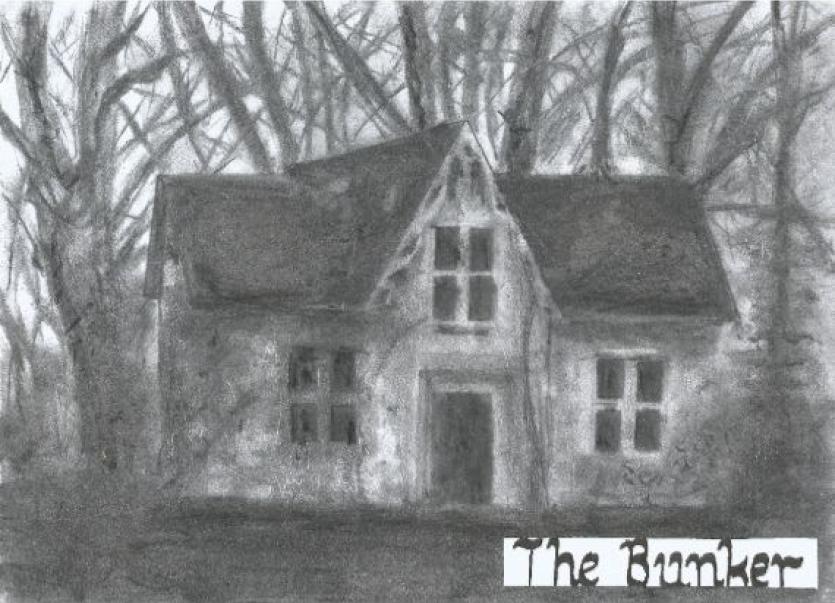 One day there were four teenagers Tom, Chad, Patrick and John. They decided to check out the old Victorian abandoned house in Flynn’s Forest.

Everything was fine until, suddenly, they heard a loud gunshot followed by a louder terrifying scream. They followed where the scream was coming from.

They peeped through the cracked window panes. They saw two dead bodies. They panicked. They had not a clue what to do. They decided to run home and return the following day to investigate.

The next day, they went back to the old house which was nestled among pine trees. As they opened the old Victorian door, the creak was very loud and echoed throughout. But strangely the house was different. All the blood had been cleaned up and the bodies were gone.

“What is this?” Chad inquired nervously. The lads looked beneath their feet. There was a trap door underneath them. BANG! They all fell through it in an instant.

“Where the Hell are we?” Tom asked as he nursed a twisted ankle. They gradually realised that they were in an underground bunker.

“Must have been built in case of a nuclear war,” said John. As their eyes got used to the darkness, they realised they had made a grim discovery. They’d found a huge amount of dead bodies piled up in a corner.

“Ssssh,” said Patrick, “I can hear someone.”

Chad, Patrick, Tom and John were hiding behind some old sacks of barley.

“We have caught them,” whispered Tom. “We know where these murdering criminals are disposing all of the knives and guns.”

It quickly dawned on the lads that the bunker was being used for hiding dead bodies and getting rid of any evidence.

All of a sudden, Tom’s phone started to ring. The sound echoed throughout the underground bunker. Two men walked up to them. Then a tall masked and muscular man pulled a gun on them. That’s when they realised that they should not have come back.

The boys were dragged to the other side of the bunker, like rag dolls. They were put into an empty room with four chairs, one sitting each of them. As they were tied, the tall muscular figure took all their phones but did not notice that Patrick’s GPS is on.

Mary, Patrick’s Mam, kept ringing him but could not get through. She decided to go to the police. The police decided to track down his GPS signal.

They arrived at the old house, but they still could not find him, at that very moment they decided to stay in that area for a few hours.

As they waited, Chad, Patrick, Tom and John planned an escape. Chad pulled out an army knife and cut them free. As they ran up the creaky stairs and made their way back to the house, the figure they had seen earlier started to run after them.

Tom was having trouble opening the old window. It was stiff with age and neglect. With further force they all finally got themselves out.

The police could hear the commotion and were quickly on the scene. They were anxious to make sure that the lads were all ok. Some of the police descended into the bunker.

They came back up. They had one of the gang members handcuffed. He was wearing a mask but when one of the officers ripped it off his disguise the lads reacted with horror. The man was John’s father.

The four boys were all escorted safely home. Poor John was devastated. His dad got a sentence of 48 years in prison and a fine of €5,000 for stolen goods. The old house was boarded up.

A few days later, the lads decided to walk into Flynn’s Forest to see the old house again. To their horror, they noticed that that the boards had been taken away. It was open again...