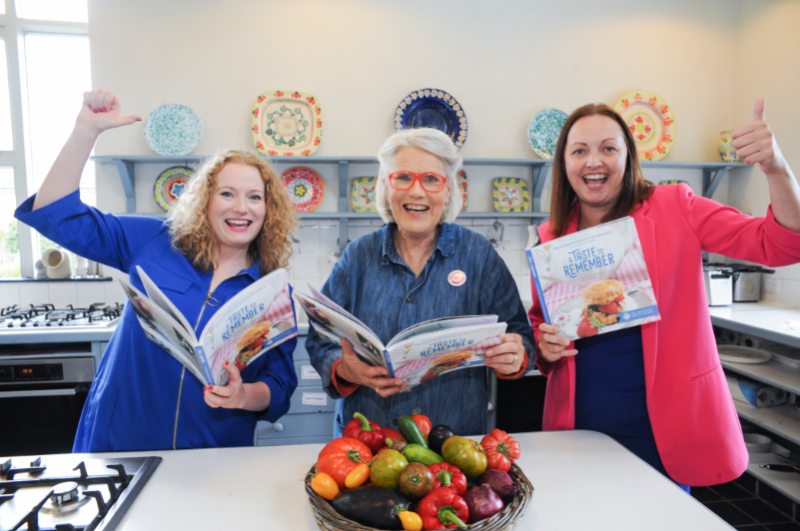 The Alzheimer Society of Ireland will mark World Alzheimer’s Day 2018 with the launch of a new collectible cookbook ‘A Taste to Remember’ – a book that features recipes from people with dementia, family members, volunteers and our staff. The book also features recipes from leading Irish chefs including Darina Allen, Clodagh McKenna, Catherine Fulvio and Simon Delaney.

As we mark World Alzheimer’s Day 2018, we all should spare a thought for the thousands of families living with dementia in Ireland today. This cookbook perfectly illustrates their reality – sharing meals, stories and memories together in good times and bad. The personal stories in this book describe family and friends and how in society we must all support each other.

This cookbook offers people a platform to allow awareness-building and perception-changing of dementia, given that a lack of understanding and stigma is still rife. Having people speak about their own lives and experiences creates a better understanding of the unique experiences of people living with dementia.

People from all around Ireland were invited to share a precious recipe that reminded them of their childhood or a special time and place and a revealing story behind the recipe.

Chair of The ASI Cavan Branch Carole Beattie, who contributed a recipe for Sweet and Sour Chicken to the book, said:

“My husband Jack was a lovely, gentle soul and we had many humorous moments along his Alzheimer’s journey. Not least was when he started to forget my name and started thinking that I was his mother. She was a lovely Scottish lady called Dora and she was a great baker. Unfortunately my talents did not come close.

“I think she adapted it as provisions became scarce but when the whole family moved to Ireland in the fifties, the chicken recipe came too and it was made many times for my husband when he was growing up. They even named it Dora’s tasty chicken bake!

I tried as best as I could to replicate her masterpieces, but no matter how hard I tried, I never quite matched up and he told me so! Although he forgot who I was, he never forgot the tastes of his childhood.”

World Alzheimer’s Month in September is an opportunity to build understanding about a health issue that will affect more and more people as the years pass, while encouraging crucial efforts to support those already affected by dementia around the world.

The campaign creates a public awareness about how countries can dramatically increase care and support for, and awareness and diagnosis, research and treatment of dementia.

There are approximately 4,000 new cases of dementia annually in Ireland.

The book will be available in bookshops nationwide from Friday, September 21st and the can also be ordered online today via www.tastetoremember.ie

The launch event, which will be attended by people with dementia, family carers, staff and volunteers, will be taking place today The Pepper Pot, First Floor Terrace, Powerscourt Townhouse centre, Dublin 2 between 6.30pm-8.30pm.

“We are very excited to launch this unique and beautiful cookbook which is packed with personal, mouth-watering recipes and memorable stories from clients, families, staff and volunteers of The Alzheimer Society of Ireland.

We invited people from all around Ireland to share a precious recipe that reminded them of their childhood or a special time or place – and a revealing story behind the recipe. The result is fantastic – well done to everyone involved. The book also features recipes from Ireland’s elite chefs including Darina Allen and Clodagh McKenna. We are very grateful for their support.

“The book is packed with fantastic and interesting recipes and they offer a secret window into people’s experience, values and personality. In fact, recipes, handed down from generation to generation, are little social histories. Memory triggers.

Every recipe has a hidden love story. Food gives us physical and social sustenance. And stories are the nutrition of life and conversation. People will be physically nourished and emotionally enriched.”