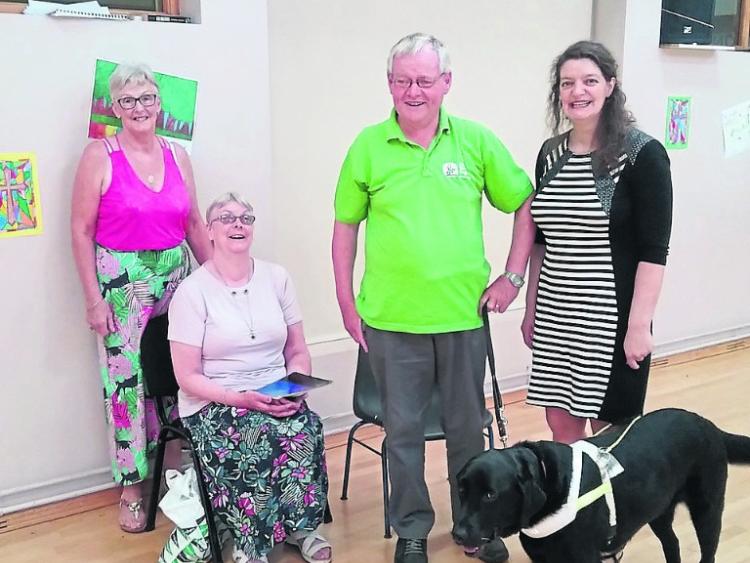 Supervised by older brother Declan they made up bracelets, rings and necklaces out of loom bands. These bands were all the rage in 2017. They are made of half-inch coloured elastic bands that they loom together.

The plan was to sell them in Farrell's Bar during the Ireland versus England rugby game on that day. The two children sold their bands and made €74.84.

They discussed with their parents how much they made.

Parents PJ and Pauline encouraged the two children to donate some of the money to a charity.

Our neighbours Breege and Tom happened to be in the bar at the time with their guide dog so Rachel and Daniel decided to donate all the money made to Tom and Breege so that more blind people could get a guide dog or a family who has a child with Autism could get an Assistance dog.

What an unselfish and wonderful thing to do.

The following Sunday morning in Ballinalee Church the same black Labrador dog was under a seat in the church. More questions followed as they drove home and suddenly they spotted the couple walking along the Aughnashannagh road with their black dog. This time the dog had an unusual harness on him and the man was holding it. The lady had a white cane and they were walking to their house in Aughnashannagh from Mass.

This is the road that was completely widened in November of 2017 and has hi-vis cones all along it, while waiting for money to put in a full footpath on this 5 to 6 minute walk to the boundary of the village at Soran cross.

Daniel, now aged 8, who sold the loom bands, was not born when this couple put in the first request for this path to Longford County Council. The footpath was started in 2017, on the understanding that it would be completed in early 2018.

But this story is not really about that, rather it’s to do with how one good moment can lead to another.

From these children hearing all about Gatsby - Tom’s black Labrador - an amazing week of guide dog awareness happened in Ballinalee.

Firstly Tom and Breege offered to go into Ballinalee school to give a talk to the children on what a guide dog means to a blind person and to explain some of the technology they use and how they can read through braille.

What a surprise the children got to hear that blind people can text each other on their mobiles!

The Principal of Ballinalee school, was very open to the idea and a great informative morning of discussion was held in the school.

The children were divided into two groups with the junior classes first and the more senior students taking up the last hour.

It is marvellous that good news can spread as well as bad, so word got out about the talk in Ballinalee.

Chairperson of the parents' committee in Aughnacliffe, Clare Murtagh, asked the Principal of Colmcille school if her Aunt Breege and Tom her husband could visit that school with the guide dog.

Tom & Breege were welcomed with open arms, with both students and teachers once again enjoying the 90 minute talk.

One thing leads to another, and Caroline Reilly of Gelsha, who teaches with Educate Together in Mullingar, sought a talk from Tom and Breege.

What happened almost by accident, became three days of learning for children.

Indeed adults too, can learn quite a lot about the issue of blindness, how we can all help, and what can be done.

More recently Mary & Martin Farrell entered a joint float for their pub and to create awareness of the Blind Dogs Association, at Ballinalee Pony show, in the parade through the village.

The float won the parade cup and a prize of €100 which went to the Guide Dogs Association and to add to the proceedings, Rachel and Daniel provided the music.

Tom and Breege would like to thank everybody for the wonderful cooperation over their week of awareness talks of which none were planned but all happened.

Ballinalee is a quiet, relaxed place. Although from early morning, from 5.30 am onwards multiple modes of transport can be seen taking the workforce to Dublin to work mostly on building sites.

But if anything singularly unusual happens, it’s hard not to be awakened by it.

For years we have been seeing the familiar faces of Breege and Tom going about their daily lives with the help of their dogs and in more recent times, having got to know them better, I, too, have learned a lot.

I watch in awe at the independence they have mastered and the huge importance of a guide dog in their lives.

Tom & Breege O’Neill are almost totally blind, but nobody would know it unless they were told.

That’s how much they’ve adopted the traits of blindness. This is the extent to which they rely on familiar, safe surroundings.

Sudden changes in terrain can cause all sorts of issues which us sighted people wouldn’t ever think about.

But for Tom & Breege, familiarity is an important aspect of living.

When they came to Ballinalee they immediately sought a safe path to be constructed from their house, to Ballinalee. It’s not far...less than half a mile.

That was six years ago.

This is not the fault of any local politician, it’s totally down to the Government who aren’t sure whether or not to prepare for an election. Simple as that.

So they stretch money everywhere simultaneously.

Tarring patches here, repairing a terribly damaged road there. Yet leaving the remainder to wait for another day.

As a result, they’re like a badly organised builder, several jobs going on together, but none finished. Mediocrity rules.

Like most things that drag on, and on, and on....eventually even the most committed relent and decide to take it as it comes.