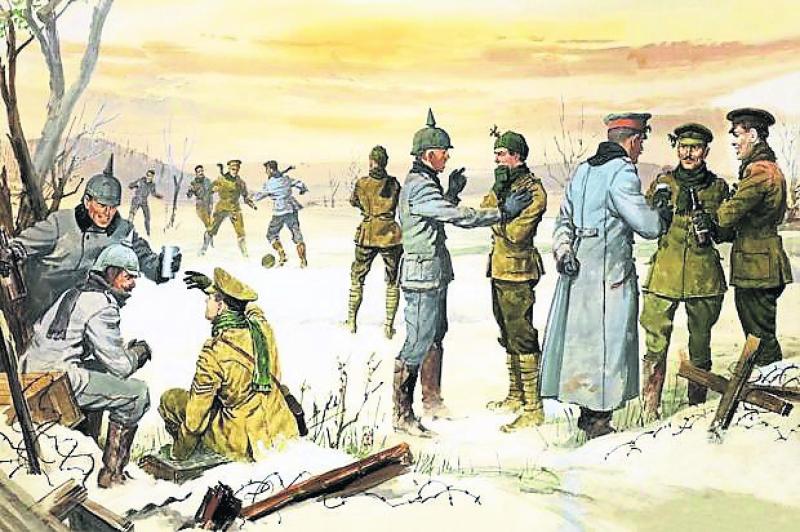 The Longford Leader New Writing column provides the creative writers of Longford with an opportunity to share their work with a larger audience. If you have a piece of writing - poetry, prose, etc - you'd like to see published in the Longford Leader, email newsroom@longfordleader.ie with a submission of no more than 1,000 words.

On the December 25, 1914 there was a truce in WW1. Soldiers from both sides sang, played football and exchanged photos, letters cigars and wine.

But that was the last time they could do that.

Those high in command were afraid they would become friends and would not fight.

Such fraternisation was frowned upon. This is a story of Tommy Penrose, a young 17 year old.

It was Christmas day 1914 and Tommy Penrose was writing a letter home to his family in County Longford. He had not written to them since he enlisted.

There had been an awful argument before he left. His mam and dad did not want him to enlist in the Royal Irish Rifles, but he did.

He faced the blank, mud-splashed sheet of paper in front of him. He couldn’t tell them about the carnage, the filth or the rats as big as cats. The booming from constant shelling was constantly pounding in his head.

He had left home in anger, vowing never to return again. As he stared into No Man’s Land near Ypres, he could see in his mind’s eye his mother wringing her hands in her apron, distressed that she had not heard from her son for Christmas.

He could see her clearly, flour on her hands. Brown bread. What he wouldn’t do right now for a slice of his mam’s brown bread. Made with buttermilk.

Today, Christmas Day, it was time to make peace even if the letter wouldn’t reach home for weeks.

Tommy’s thoughts were interrupted by an eerie silence. The gunshots and shelling became just distant echoes. After about five minutes, he could just make out a man advancing towards them on no man’s land.

He appeared to be waving a white flag. A German soldier. Then the Germans sang ‘Stille Nacht’ across the destroyed fields.

Tommy and his fellow soldiers looked up and saw the German in the middle of no man’s land. Could it be a ruse? The Hun could not be trusted.

The words came drifting slowly but clearly across. Tommy wondered whether his ears as well as his eyes were deceiving him.

He blinked and blinked again. Was that his own regiment rising tentatively and taking their own baby steps to meet the ‘enemy’?

The pen dropped from Tommy’s hand, ink splattered his boots as he watched Captain Broderick wave a white flag. Was it possible that this formidable soldier was singing ‘Silent Night’? The harmony was crisp and clean, cutting the early morning air.

It was like a chorus of angels had descended.

Suddenly there was a shout. “Habe ein friedliches Weihnachtsfest“. “What did he say?” Tommy asked Private Smyth from Lanesboro.

“No idea” replied Smyth, half laughing. “I just know that 'Weihnachten' means Christmas.”

As if that wasn’t surreal enough, a ball was flung into the enemy front line. Tommy gasped and jumped instinctively. He looked down and discovered his feet were moving forward in the direction of the football match that had commenced as naturally as the dawn had broken earlier while he had agonised over the words he would pen.

Tommy loved football and soon he was organising men into teams as a self-elected captain. He had played Gaelic Football for a few years with the Ballymahon lads. If they could see Tommy now! Playing soccer against the enemy!

Men, yes, not soldiers, with one common goal of trying to make Christmas Day one of peace, a brief respite from death and injury.

The cold didn’t even bother the soldiers. Few words were spoken but plenty was said, as football was played and cigarettes were exchanged. Words were unnecessary. The meaning was clear: Peace on earth, goodwill to all men, even if only for a few hours.

Tommy smiled inside. The trench coats were mounted on barbed wire holders to act as goal posts.

He would make peace with his soldier foe today, and his family would have plenty to read in his letter after all. The peace between the opposing armies would be short lived but would go down in history and be talked about one hundred years hence.

Most importantly, Tommy had peace of mind now that he had reached out to make peace with his family by writing this letter.

He understood fully their reluctance to let him go to war. He could see his mother’s smile and a silent tear joined hers across the miles. His mam would receive a long letter from her only son. For now, all was well with the world.