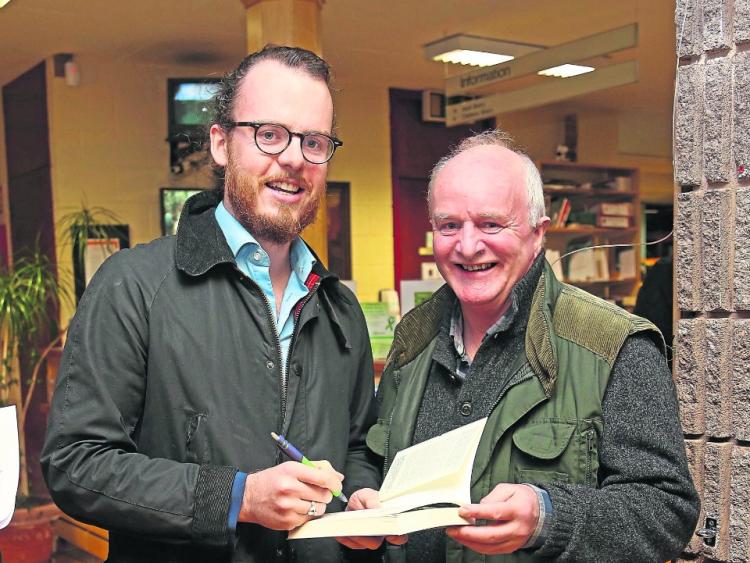 The launch of John Connell’s ‘The Cow Book’ last Thursday in Longford County Library was the most uplifting experience I have had for a long time.

We talked about it all the way home, and most of the next day.

That’s as positive a thing as is possible to say, because in this case we had nothing but praise; a simple measure of any experience.

Whilst John’s book was the purpose of the large gathering (Killoe supporting its own as they always do) yet it was, in fact, the spirit of the evening that held us all in thrall.

Introduced by MC, the great Mary Carleton Reynolds, it was dotted with music interludes, and many good speakers.

The show stealer on this occasion was undoubtedly Éamon Ó Cuív.

His honesty, interest, and natural wit portrayed a man we had not seen before. It reminded me of another lovely night in The Greville Arms in Granard when Michael McDowell was a stunning guest speaker at a Kitty Kiernan event.

Suddenly, when relaxed and at ease, these politicians show their real selves - personality, charm, fun, and real intelligence.

Ó Cuív’s praise and encouragement about country living - the neighbourliness, friendship, sense of community was a real boost to us all, particularly at a time when we, and especially farmers, feel totally invisible, and about to be thrown on the scrap heap.

We didn’t expect this city slicker, born in central Dublin, to feel such empathy for the countryside and its people.

His praise, excitement and passion re-endorsed our beliefs.

Éamon spoke of the craziness of rural people being forced to move into towns, and built up areas, and he was critically aware that in fact humans are not designed to live in closed spaces.

Indeed he touched on the fact that many in power and Ireland’s planners had no idea of the richness and worth that lies in rural communities.

We were really impressed with his simple statements of truth, and it was reassuring to see at least one politician who actually understands, and has studied, the dynamics of rural life, and the benefits that are there for everyone. But here is a man who actually believes in the sense of peace and reality that exists for most of us from the countryside.

Yes, it’s natural that some are happy in cities, but there are some who are happier to live in their own space, wherever that may be. Nobody should try to force decent people to move into towns. Utterly destroying their mental peace forever.

Why herd us like cattle, into the smallest space possible, and be forced to live in a way, and under the dictat of some opinionated civil servant who wouldn’t know one end of a cow from the other?

John Connell followed this theme too, in his address, and in his charming manner brought us from an aboriginal welcome through his journey on the farm, and other places.

John paid fulsome tribute to his parents, and in a humorous way told how he discovered that his dad could actually play the harmonica.

He described his father's playing as akin to a mixture of cowboys, Indians, Irish, and camping round a big fire.

He looked and sounded genuinely elated that so many came out.

He shouldn’t be, because he’s a talented man.

With Éamon Ó Cuív, John captured the atmosphere of the country, in the middle of the town.

Fittingly, one of the last things he said was, “The city can feed the body, but the countryside feeds the soul.”