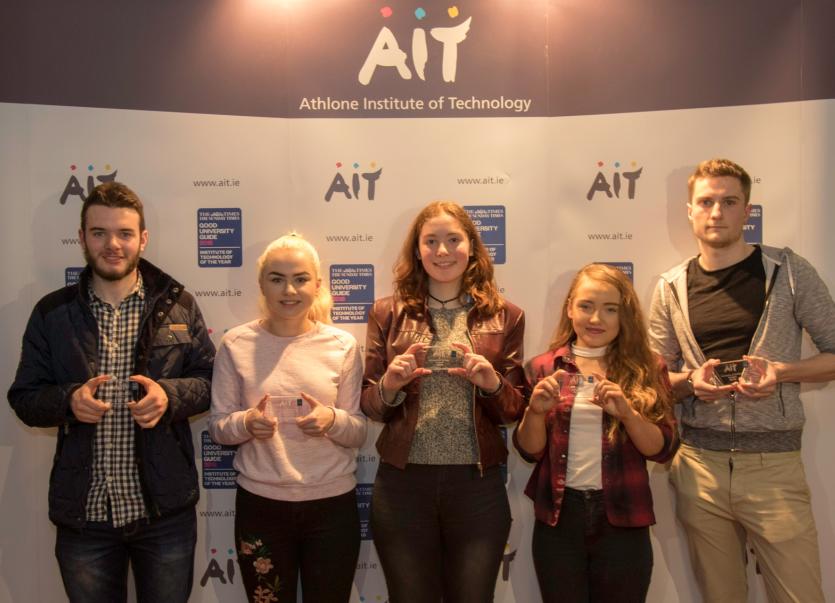 Ballymahon student Stephen Mulledy was one of the inaugural recipients of an AIT Scholarship of Excellence in recognition of the high points he achieved in his Leaving Certificate exams.

The select group of AIT first-year students, who achieved 500+ points in their Leaving Certificate, were presented with their scholarships at a special ceremony on Tuesday, February 20.

In October this year, AIT were awarded the coveted prize of the “Sunday Times Institute of Technology of the Year – 2018”, an achievement which AIT are very proud of and the Scholarships of Excellence were inaugurated to celebrate its students achieving 500 points or more in their leaving certificate examinations.

Professor Ciarán Ó Catháin said, “The scholarship of excellence award is the perfect way for us to congratulate our students on their academic endeavour and show that we are supporting them in their academic journey here in the institute.”

Speaking at the ceremony AIT President Professor Ciarán Ó Catháin said, “I am delighted and proud to present these inaugural scholarships to our six recipients in recognition of their hard work and outstanding academic achievements in their leaving certificate results. It is also an opportunity to recognise and give credit to their parents, teachers, principals and guidance counsellors who all played an important role in nurturing and assisting these students in their achievements.”

Professor Ó Catháin added that AIT is a growing, internationally diverse community with global reach that continues to expand. “We stand at the forefront of innovation, teaching and student welfare and we are proud that each of these students have chosen to start their third level education journey with us.”