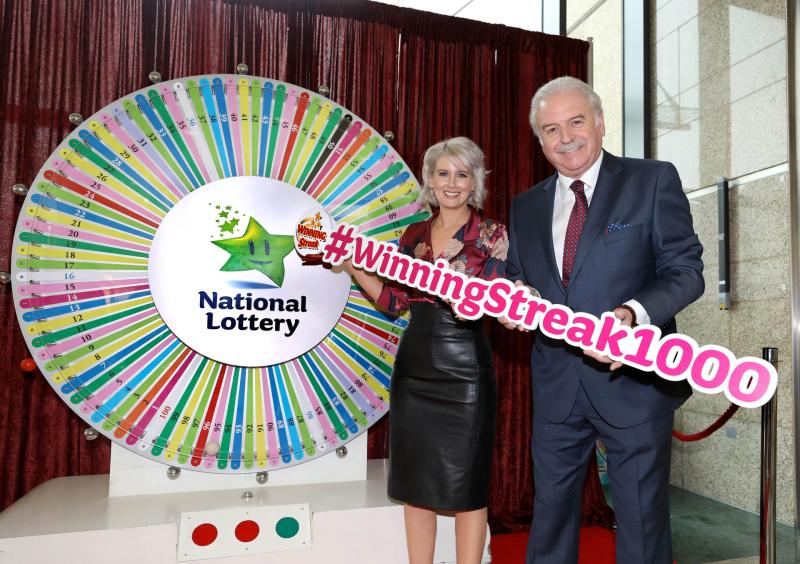 Over the 28 years of the iconic Winning Streak game show on RTE One, 83 players from Co Longford have taken part, winning a total of €2,213,788.

Figures released  by the National Lottery reveal that more than €168 million has been won by players since Winning Streak first launched.

The popular programme, one of Europe’s longest-running game shows, is celebrating its 1,000th episode this Saturday (February 24) and has featured 5,925 players since it first aired on September 21, 1990.

An analysis of winnings over the 28 seasons of the programme shows the luckiest counties by appearances (with Dublin no. 1), and by highest average prize per player (with Kilkenny at no. 1).

The top five luckiest counties by appearances are:

Longford lies 25th in highest average per player table with a €26,672 average win per player and the county also lies in 25th on the luckiest counties by appearances table.

RTÉ’s dynamic duo of Marty Whelan and Sinead Kennedy have been presenting the show together since 2013, with Marty presenting since 2009.

Speaking ahead of the 1,000th episode of Winning Streak this Saturday, Marty Whelan said: “1,000 shows is such an impressive feat but a true testament to how the format of Winning Streak works. It is reality TV, before reality TV existed, and to get to know each of the five players every week while guiding them through the games and watching them win thousands of euros is fascinating. It has been an honour to have played a part in the success of the show which has been a Saturday evening staple in households across Ireland for almost three decades.”

Entering her fifth series on Winning Streak, Sinead Kennedy said: “My favourite part of the show is getting to know each contestant over the week leading up to the show, first by having a conversation or two over the phone, and then meeting them in person. Even though the show is only on for one hour, in that hour I think that the viewers also get to know five players on screen and that is what makes the show so successful.”

National Lottery CEO, Dermot Griffin, said: “Winning Streak is unique and there is nothing else like it around the world. The show is a very important and treasured part of the National Lottery “family”. Part of its success is the fact it reaches into every community in Ireland. Over the years we have had players from every County who bring with them supporters to RTE every week to celebrate. This inclusiveness is part of the success of the show and why it has sustained over so many years."

The popular gameshow features Fantastic Five, High Low Share, Wheel Reveal and the Grand Prize Wheel, giving five lucky players the opportunity to win prizes of cash, cars and holidays every week - plus the chance to spin the iconic wheel and win up to €500,000.

In addition this season each TV show is giving away a luxury cruise for two valued at €5,000.

For a chance to appear on the show players have to reveal 3 stars on the Winning Streak scratch card to be posted to the National Lottery for inclusion in a draw. Five players are selected every week to appear on the following weeks show.