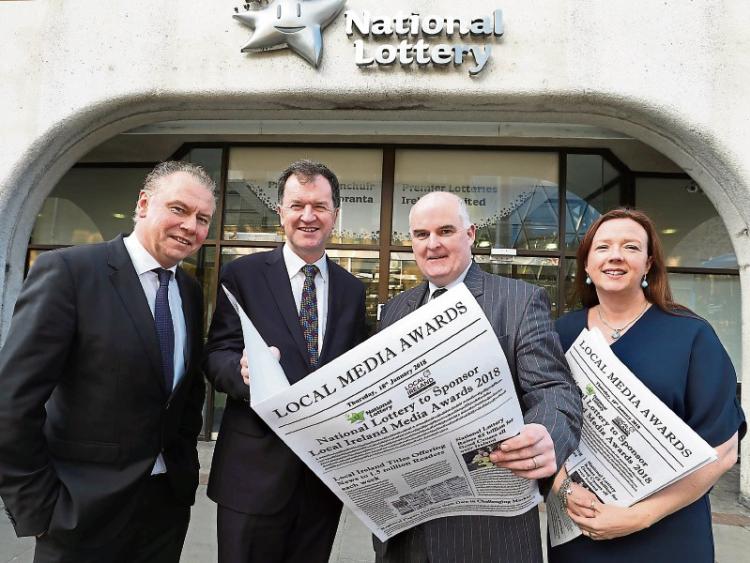 The National Lottery is to sponsor this year’s Local Ireland Media Awards which recognise and reward the talents of those working in the provincial and local press.

Local Ireland is the voice and representative association for 45 weekly titles, including the Longford Leader, which offer local news, sport and information to 1.5 million readers – in print and online.

The awards, now in their third year, will feature 14 categories spanning all areas and disciplines of modern journalism including news, sport, features, advertising, design and online.

Last year, Longford Leader journalists Aisling Kiernan and Liam Cosgrove were shortlisted in the ‘News Series of the Year’ category for their coverage across the Leader print and online platforms on ‘Falling Global Oil Prices Bare Their Teeth in Longford’.

“The past year has seen some extraordinary developments in terms of the credibility of news sources.  It is against this context that we can authoritatively state local newspaper readers know that they can rely on and trust the content in their local paper,” said Frank Mulrennan, President, Local Ireland, at the launch of this year’s awards, which, for the first time, will include a special award for the reporter or newspaper that has given the best coverage to a Good Cause beneficiary.

Dermot Griffin, chief executive of Premier Lotteries Ireland, operator of the National Lottery, said he was delighted to be supporting the Local Ireland Media Awards.

“Regional papers hold a very special place in the heart of communities all over Ireland. They are the longest serving news medium in the country and despite the fact that the print media is going through challenging times it is good to see local newspapers holding their own,” he said.

This year’s awards will be presented at a gala event at the Radisson Blu Hotel, Athlone on May 24.

The independent judging panel will be chaired by Kevin Rafter, Professor of Political Communication and Head of the School of Communications at DCU.