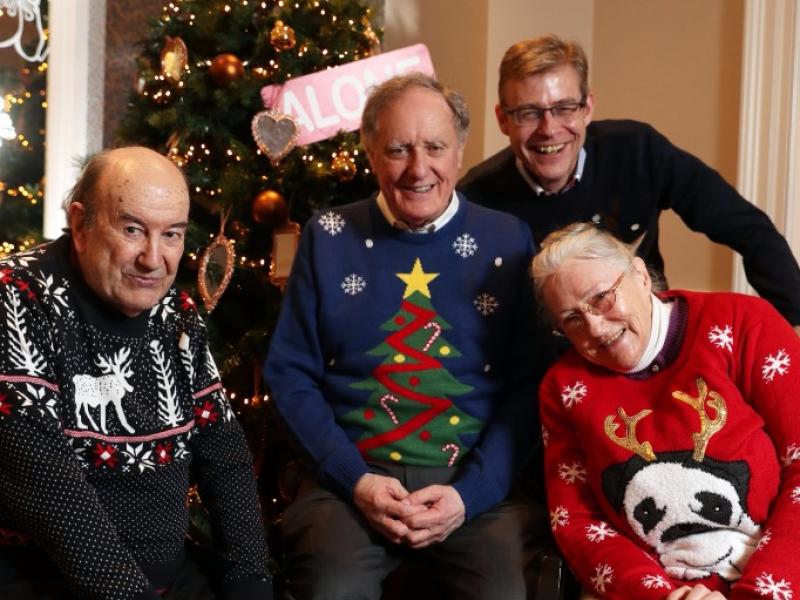 ALONE, the charity that supports older people to age at home, today launched their Christmas campaign which asks individuals to support the work of ALONE by volunteering and donating, and for older people experiencing isolation and loneliness to get in touch with ALONE to avail of one of it’s services. At the launch of the campaign former broadcaster and journalist Vincent Browne urged members of the public to offer friendship and support to those living alone.

Vincent Browne commented at the launch, “I have been an admirer of the work of ALONE for many years and I fully support their vision of a society where older people are included as valued and empowered members of the community. The need for supportive housing, befriending and other services for older people has grown exponentially in recent years and, with the number of over 65s set to increase dramatically in the next couple of decades, it’s only going to get worse if we don’t act fast!”

He continued, “This campaign is asking older people to pick up the phone and get in touch with ALONE, it’s asking families to talk to the older people in their lives about their needs and it’s asking people who want to help to become an ALONE Befriending volunteer. ALONE’s campaign is offering us the chance to connect with older people, provide them with the supports they need, and build a sense of community.”

ALONE provides direct, frontline services to people aged 60 years and over, through coordination of supports, volunteer activation, housing with support and application and sharing of knowledge and technology. Its Befriending Service provided friendship to over 500 older people who were socially isolated or lonely in 2016. ALONE’s Housing with Support provides tenancies and on-site support in community-centric areas, giving older people alternatives in their choice of where and how to age. It also supports older people by offering knowledge, training and technology to ensure quality services, common practices and independent living.

Sean Moynihan, CEO of ALONE, commented, “As an organisation that works with older people, we see firsthand the effects of loneliness. Last year’s census revealed that 27% of over 65s in private housing, live alone[i] and 1 in 10 older people suffer from chronic loneliness which can lead depression, and is a predictor for dementia, cardiovascular disease and decreased immune system responsivity.”

He continued, “We want older people to know that they have a right to be supported, to receive the support they need and to live in a place of their own choosing. We are asking members of the public to support ALONE by donating their time to older people experiencing loneliness, making a donation to support our services or referring an older person who might use our services. We will all be old one day and deserve to have supports and services in place to help us age well at home.”

At Christmas, ALONE’s activities include; a Christmas dinner dance for older people and volunteers, the delivery of hundreds of Christmas hampers to older people in need and a special Christmas Day dinner delivery for a number of older people. ALONE’s services mean so much to the people who avail of them, as one older person commented; “ALONE and my volunteer have made such a difference in my life. I am not alone at Christmas, my birthday or throughout the year. I have people to celebrate with me. I feel like I'm part of the community.”

For those who have concerns about their own wellbeing, or the wellbeing of an older person in their community, ALONE can be contacted on (01) 679 1032. To make a donation and help aid ALONE’s work this Christmastime visit www.alone.ie