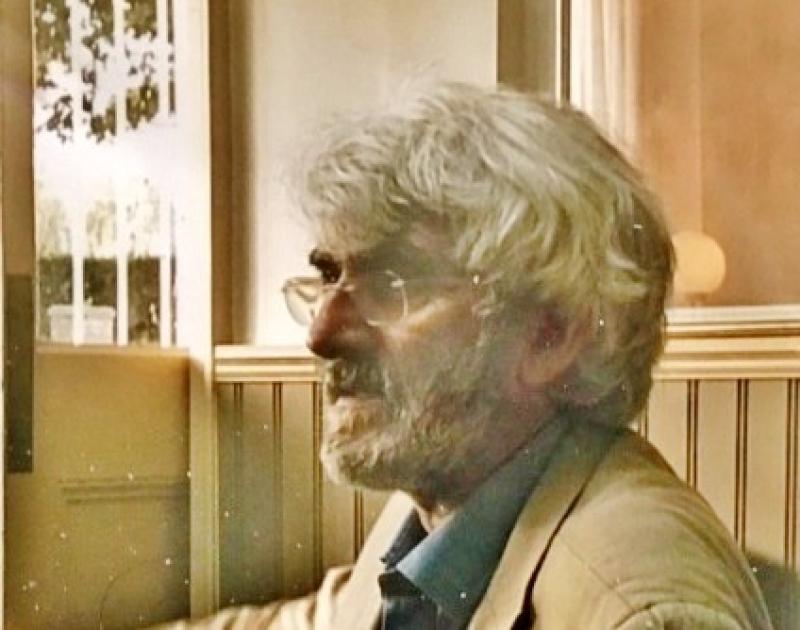 Bernard Canavan, an artist born in Wicklow but reared in Edgeworthstown before he emigrated to the UK in 1959, is certainly to the fore of art and culture in Ireland at the moment.

With a Distinguished Service Award from the President coming his way and a documentary inspired by his artwork in the works, he's certainly come a long way from the orphanage in which he spent his early years.

As a teenager, Bernard was thrown into a culture that was entirely different to the one he was used to in Ireland. This was a culture of diversity, where religion was not compulsory and people spoke freely on matters of philosophy and sex.

In his early twenties, Bernard encountered ‘Swinging London’ at a time when the city was undergoing a mini-revolution in pop-music, which combined with the revolution made possible by ‘the pill’, and the repeal of censorship and homosexuality laws.

“I found that my drawing ability, which had been nurtured during my Longford childhood, suddenly emerged into high demand,” Bernard explained to the Longford Leader.

“I got regular illustration work from a growing number of new underground press titles: 'Oz', 'International Times', 'Peace News', and for mainstream papers like 'New Society', 'Computer Times' and the 'Architectural Journal', which meant I had to enlarge the scope of my reading still further to take in popular social and psychological theorists of the day.”

He also designed theatre sets and posters for The Roundhouse and Unity Theatre, the Oxford Playhouse, with one poster included in a volume of graphics for the best international designs in 1977.

But first. he received an education.

In 1967, Bernard was awarded an art scholarship to Europe and so he went to Berlin and Prague and, after studying the art of France and Italy, he soon began painting himself and showing work in mixed exhibitions.

Then, in the 1970s, with no exam qualifications, Bernard was lucky enough to be admitted to a higher education college, where he received a diploma in history and economics before being admitted to .

“After graduation in 1976, I returned to London and taught history - Irish, British and European - and was in much demand at adult education institutes in London during IRA British bombing campaign of the late 70s, to provide some historical explanation of the causes of this violence.”

It was a changing time for Ireland, which was undergoing a process of “intense self-analysis”, which Bernard referred to as “a catching up educationally with the modern world” that was being experienced in Britain.

“And that process was, I maintain, to a greater extent than has been acknowledged, the result of changes in values that were coming back to Ireland with every returning wave of summer visitors,” said Bernard.

“Children of these emigrants, who spent their long summer school holidays back with parents in rural Ireland, revealed all kinds of details - inconsequential family details, that never made the news on Irish papers:

“The fact that these children had fewer siblings than their Irish family counterparts; that many attended ‘godless’ schools; the fact that they sometimes had step-dads in London; that their church attendance was somewhat irregular, and they knew, or said, few prayers; that there were relatives it was whispered who lived together.”

But most of all, Bernard added, it was the change in the role of Irish women in Britain that brought the most .

“Having come from a country where caring had been rigidly confined to the domestic sphere, here they were in a world where caring was out the public with the NHS, where training was paid for by the state, wages and advancement was structured, and the service was a subject of pride,” he said.

“The Irish world had been turned inside out, for the male world went down a hole in the ground, unregulated, undocumented, and sometimes illegal with ‘the lump’, its operation and life supported by make-do measures.”

The effect of these informal reports back to even the most outlying parishes of Ireland, he said, began to prompt a questioning of the theological morality enshrined in the Irish Constitution: the ban on sex education, birth control methods, divorce, the lack of science and sex education classes in church-controlled schools, the puritanical censorship laws.
“Migrants were becoming a bridge to the modernity Ireland had desired in joining the EEC; it was not or Boston that was changing Ireland, but places like Birmingham and Brent, in the land of officially ‘forgotten’ exiles,” said Bernard.

“Perhaps nowhere could these changes be seen more than in the art world, the area least consequential of all activities, where the ignored and the negative often surfaces first.

“The prettified, selected world of the Impressionism, the white-washed thatched cottages of Paul Henry under blue Italianate skies began to look like advertising hype for the Irish 1950s from which people fled in their hundreds of thousands.

“German expressionists like Max Beckmann, Franz Masereel, and Paula Rego today, had a greater truth to tell, and perhaps the most famous expressionist of all, Francis Bacon, was the most relevant of all in his work,” said Bernard, who said he often encountered Bacon in the 60s when buying canvasses in specialist art shops in London.

“He was well known for his sexually explicit naked figures, his early ‘screaming Popes’, and pictures of half-human monsters entitled ‘Studies for the Crucification’.

“Few people knew of his Irish connections then, and he obfuscated the link by denying a belief in God at a time when Irish identity was emphatically Catholic.

“As that identity began dissolving in the last decades of the twentieth century, the ‘rejected’ and forgotten Ireland’ began to surface, at a time when the Celtic Tiger was everywhere being lauded.”

Bacon’s quintessentially Irish subject matter, his themes of human isolation, the abused body, repressed sexuality, political violence and incarceration, were not simply about Auschwitz and Hiroshima and modernism elsewhere, as usually claimed, but about ourselves, Bernard explained.

“And even if we could not always understand his images, we could feel the truth of them, the alienation and normlessness of that world in our bones.

“That effect is everywhere visible in Irish exile literature, in John McGahern, Connor Riordan, John B Keane, Edna O’Brien, Shane Connaughton, Donal McAmlaigh, JM O’Neill and the stories of Niall Jordan, to name just a few, but it was probably in painting that it has had its greatest impact.”

In his own painting, Bernard looks deep into the philosophical, historical and theological issues central to Irish identity and the effects of emigration.

He paints raw energy with intensity of colour and somewhat sensitive chaos.

“My images are about the impact of modernity on the solitary individual, but Ireland, we must remember, is making that same journey collectively as a society, and increasingly the world of my distant youth is indeed another country today,” he said.
With such striking works as 'Vertigo' and 'The Loved and the Unloved', Bernard's work has been widely recognised as a representation of the 'forgotten Irish' in London.

As a result, he will be receiving a Distinguished Service Award this year from President Michael D. Higgins himself and will stand alongside the likes of Liam Neeson at a ceremony in Dublin.

This is the second of a two-part feature on Bernard Canavan. To read the first part, in which Bernard discusses life in an orphanage and up in Ireland, visit www.longfordleader.ie.