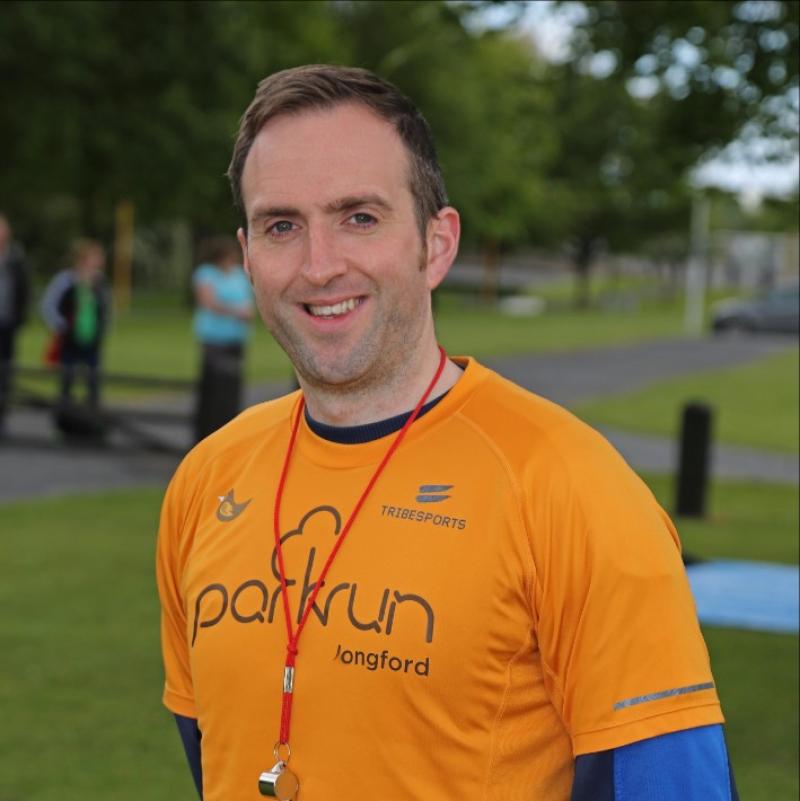 Longford parkrun and junior parkrun is the brainchild of thirty-year-old Kevin Kane from Dromard and it has enjoyed enormous success since it began in May 2016.

parkrun takes place every Saturday at The Mall (Albert Reynolds Peace Park) in Longford town and Kevin explained some of the reasons why he started it.

“I'm passionate about health, fitness and well being. Some people might participate in a run once in a blue moon which won't make much of a difference to their health. As parkrun is a weekly event, it provides locals an opportunity to take part in weekly exercise which can have a much more positive effect on the person. As it's only 5km it's achievable for everyone, whether you walk or run. It's for all levels of ability.”

Kevin Kane revealed, “People are always complaining that there is nothing to do/nothing of any good to do in Longford which is not true. With parkrun, we now have something to do in Longford that is in each of those countries which I think is pretty cool.”

Kevin, who lives at home with his parents and his sister Louise, said he ‘loves everything parkrun’. He lived in London for seven years and it was there that his love affair with parkrun began. “My parents and sister, have all participated in parkrun and really enjoy it. My brother David lives in Edinburgh.”

When Kevin returned to Longford in 2015 and discovered the nearest parkrun to the county was Mullingar, Sligo and Cootehill, he decided to set it up. “I knew how successful it would be,” he enthused.

parkrun initially came to Ireland in 2012 and now there are just over 60 parkruns in Ireland.

There were ninety-seven participants in the first Longford parkrun on May 21, 2016 and on the anniversary run, on May 20, 2017, there were with 183 participants.

Kevin outlined, “Our average number of participants is over a hundred with our highest attendance of 321 recorded last March. I'm not too bothered about the numbers side of things. So long as people come and try it and enjoy it, that is all that matters. People generally love it and come back most weeks and the high numbers does create a great atmosphere.”

Working as a teacher in London, Arva and most recently Killoe, Kevin explained, “Home is where the heart lies now. I love being home. I'm sports mad. I love everything to do with it. I play GAA, soccer and watching rugby, hurling and of course athletics. I love going for a run and enjoy a good game of table tennis.”

At the beginning of 2017, Kevin asked if anybody would be willing to set up a junior parkrun in Longford. Being a teacher, children's fitness is very important to him and thankfully Michael O' Hara answered the call. In January there were only four parkrun events in Ireland. Now there are eight, including Longford. “There is one in Kerry and Mayo and then five others in Dublin, so for Longford to have this is massive and a wonderful start for children aged 4-14.”

Longford junior parkrun began on Sunday, June 11 last and it takes place on a weekly basis. “It's only 2km and children can take part in both the 5km Saturday event and now the 2km Sunday event. As there is no other junior parkrun in the midlands this is huge for us and we expect many tourist runners for this also from surrounding areas.”

Longford Sports Partnership has been very supportive of the parkrun initiative and Kevin is thankful to them. “So far they've donated €5,000 between both parkrun and junior parkrun in Longford. This pays for the set up and gives us parkrun for life in Longford. They are a great bunch.”

The spirit of volunteerism in parkrun appeals to Kevin.

“I love the fact parkrun is free and totally volunteer driven. In this day and age people have to pay for everything. To have free weekly exercise on your doorstep is very attractive to people. The volunteers all come from the participants.

“Everyone takes their turn. I wanted something in my home county that builds community spirit and begins friendships. With so many regular runners that is inevitable and some of the stories I've heard about different friendships being made are lovely.”

Commenting on the team of run directors, he said, “I've a fantastic team of run directors who help on a weekly basis. Colm McNerney, Fiona McManus, Ruth McKeon, Bernie Doyle, Maeve Killian and Teresa Blake give so much to our run and without the help of these people parkrun wouldn't be possible. We're always looking for more run directors if anyone wants to do it. All you need to be is confident and to speak in front of a lovely bunch of people.”

Kevin says Longford is fortunate to have a wonderful amenity in the Mall. “It's a beautiful park and nice to see it utilised regularly. We have tourist runners most weeks from various locations around the world.”