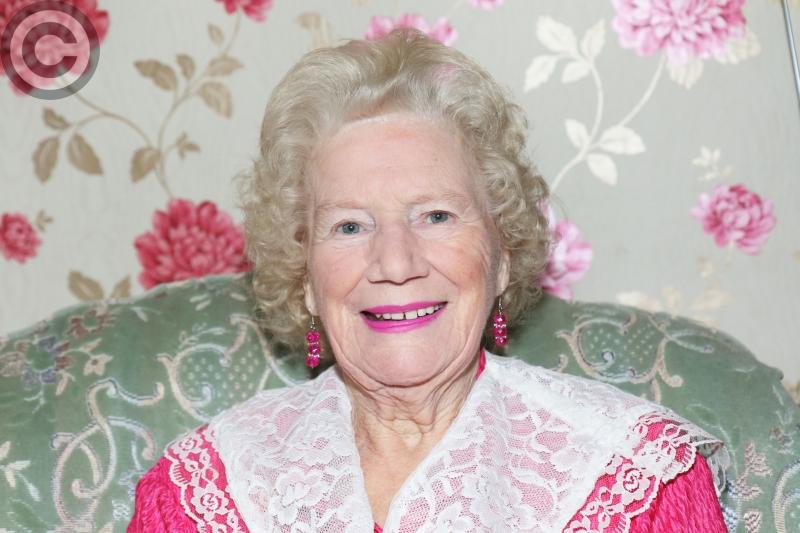 Mai Kelly has been involved with Longford Show & Country Fair for the best part of 45 years.

It’s about 30 years or so now since she joined the show’s committee and Mai has remained steadfast and encouraging to all the members in the intervening years.
A native of Co Sligo, Mai came to Moydow when she married her late husband Mike.
Together the couple had seven daughters and as time went by it became very clear that Mai’s talents outside of her family, lay in baking and crafts.
So, shortly after arriving in south Longford she became involved with Longford show.
Looking back, she says the show was her rock during the good and the bad times.
Her husband died at 46 years of age, leaving her with seven children the youngest of whom was just nine months old at the time.
“I couldn’t go out and work,” Mai told the Leader.
“I had the children to take care of, so I started making wedding and birthday cakes.”
Her love of that particular craft and her involvement with Longford Show & Country Fair together with the friends she made saw her little enterprise expand and soon, such was the demand for her fabulous cakes, she was delivering her wares to hotels and restaurants all over the region.
“People were so good to me,” she recalled as she relaxed in her warm and cosy south Longford home last week.
“The work was so rewarding and I made great friends during that time.”
Meanwhile, Longford Show & Country Fair remained to the forefront of Mai’s mind once her seven little daughters were cared for and contented.
“Longford show got me through the thick and thin,” she affirmed, before pointing out that it was Marcella Higgins, secretary in the early 1980s who encouraged her to become involved in what is now one of the biggest agricultural shows in the midlands.
“Well I did involve myself; I was involved in the crafts and cooking side of things back then,” she said.
“We had the vegetables, flowers and photography in those days too and it was such an enjoyable time for me.
“I have met the best of people and made such wonderful friends through the years.”
And, while that may be so, Mai’s gentle presence and her inner strength is a force to be reckoned with and it was those very characteristics that endeared her to many as the years passed.
So, needless to say, it wasn’t long until those valuable skills with Mai found their way to a seat on the show’s committee.
Now 30 years on and still a hugely valuable member of both the show and its committee, Mai says not a day goes by without her thinking about Longford show and its significance not just to her life but to the entire rural community across Co Longford.
“I often wished the Longford show was two or three days long,” she laughed, before pointing out that Tullamore Show was one of her favourite events outside of Longford and of course, held the advantage to her home county because of its longevity.
“I always felt that one day was not nearly enough to show the world how much we had to offer here in Co Longford.”
Mai has also been involved with the ICA for many years now and as she says herself, “there is no end to the talent of the ICA ladies”.
They will have their own cafe and home baking tent at the Co Longford Show & Country Fair next Sunday in Lisnamuck and as is the case every year now, Mai will bake half a dozen or so scones for the cafe on the morning of Longford show. “It is something I do every year and I have no intention of stopping now,” she laughed.