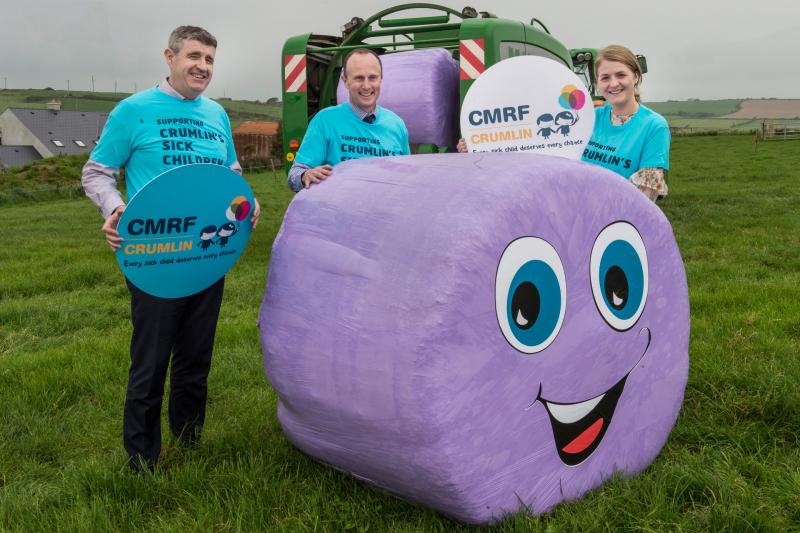 In 2016, silage fields across Ireland were dotted with purple bales which resulted in €14,000 being raised to support CMRF Crumlin’s work with some of Ireland’s sickest children.

Again in 2017, for every purple bale wrap roll sold during the campaign a sum will be donated to CMRF Crumlin with a plan to exceed the €14,000 raised in 2016.

CMRF Crumlin, the fundraising body for Our Lady’s Children’s Hospital Crumlin and The National Children’s Research Centre, is delighted to partner with Zeus Packaging and the ATC Group/Co-op Source for the second time in 2017 for their “Go Purple” for Crumlin campaign.

CMRF Crumlin are asking farmers and contractors to support the campaign by choosing to buy purple bale wrap  which are supplied by Zeus Packaging and distributed through ATC Group which has 17 member co-ops serving local communities across the length and breadth of the country.

Ciara Smith, Head of Corporate Partners with CMRF said “CMRF Crumlin are delighted to be chosen once again as the Irish partner for this campaign which Zeus has rolled out internationally to support the needs of sick children.  Every year, over 145,000 children and their families visit Crumlin Children’s Hospital from across the length and breadth of Ireland and CMRF feel partnering with ATC Group reflects the geographical spread of the hospital’s patient base”

Gavin McCarthy, Product Manager Zeus Group said “We’re honoured and delighted to be able to help in any modest way we can and I know that ATC Co-op Source and their farmer members feel exactly the same.  I’d just ask people to support the Purple Promotion in any way they can – through social media and word-of-mouth – but especially by buying it in their local co-op stores and giving the purple bales a nice prominent spot in the fields where people can see them and keep the promotion driving forward.”

John Heaphy, General Manager, ATC Group said: “We are delighted to have the purple products in our stores again for this season, we are very proud to support such a worthwhile cause again and look forward to making valuable contribution to CMRF Crumlin in 2017.”