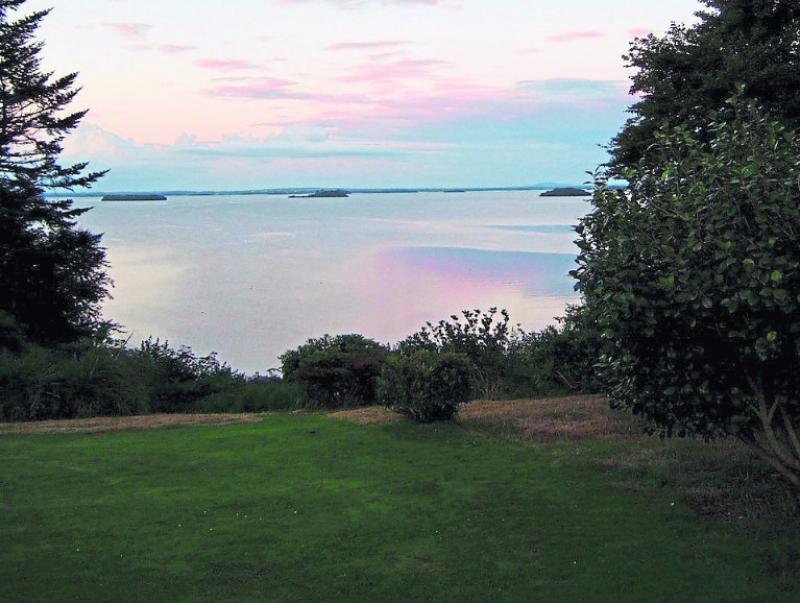 The enduring legend of the creation of Loch Gowna tells of how a woman washed her clothes in a spring well in Tubber which is in the parish of Granard. At the time it was considered a grievous offence to wash clothes in water to be consumed by humans.

In any case the woman washed the clothes, and as she washed, a calf sprang up out of the well and leaving a trail of water behind it, dashed to a depression in the landscape, which began filling up with water.

The water filled all sides until gradually a massive pond developed.

From its development the lake created another river The Erne, that flows onwards into Cavan and Fermanagh and into the sea at Ballyshannon. I'm presuming that the entire area forming the Loch Gowna system is included in the acreage.

Now, being forgiving of the woman who washed the clothes in the well, isn't it some outcome to getting clothes washed!

You might ask what has this semi history lesson got to do with writing anything in the Longford Leader?

Well, this part of Co Longford has long been somewhat neglected, not only in reality, but also in repute with it's reputation born out of the way people lived. The North Longford people were reputed to be tireless workers, making it possible to eek out a living on stony or boggy land. They were prepared to work and manage any strip of land.

This mindset has taken hold... somewhat... although there are people who are entrepreneurial in spirit and can create great concepts such as the Festival run (for years) by energetic, creative, and enthusiastic people from Colmcille.

(This takes place every Whit weekend for St Christopher's Centre in Longford.) NOTE.

However, this is one of a few exceptions to the rule, as most areas of north Longford are starved of anything approaching properly run, and well thought out public events.

I'm not ignoring many well run places that do show signs of encouraging adventure.

Drumlish Carnival is one such big event, which deservedly has become recognised nationally. It is a well run, properly supervised undertaking.

These are two well run events, promoted and managed by local people, who aren't waiting for some handout to raise money.
The spirit of the community collective works for the greater good.

In Drumlish the bars locally are all closed, without exception, and on time while the Carnival is running.
In my own area, the Carnival has ceased operating. A pity, really.

Maybe that has something to do with bars remaining open late, during Carnival hours, although I wouldn't say that was the only negative to affect the Carnival at the time.

Still, if the example of Drumlish was followed, it might have helped.

In any case, back to Lough Gowna...

In North Longford we are sitting on a potentially huge tourism industry, if we just open our eyes and see what is in our midst. I know, I know, that some events do happen, but nothing like the potential that stares us in the face and can transport our minds to other activities and other pleasures.

It's worth while taking a drive to Molly Hill, and take time to look at the magnificent beauty that is spread before our eyes.
A veritable living, breathing, shifting, moving panacea that exceeds the magic of any oil painting.

If a visitor stopped and looked out over Loch Gowna from Molly Hill, they'd never have any sense of the history of British occupation, and Catholic Church activities which are interwoven in a complex fashion.

It's said that the stones that built the Derrycasson House in the wood, came from Inch Island, where Monks lived. When Derrycasson House eventually fell into disrepair the stones were again moved to Mullinalaghta Church, where, once again, they served to build a beautiful church. A local recently said "we took them back!"

North Longford is ripe for tourism related activities, if enough people are moved to be energised.

The one thing that's needed are more bed & breakfast accommodation.

This is the first thing to provide, if one is really serious about tourists.

Gowna boasts a well run hotel, which defied the rules of the time by turning it into a thriving, throbbing, happening enterprise. This is one example of what can be done, if given the energy, application, and eye for opportunity. Take a bow, Christine!

How many people are employed in Gowna?

There's one example of marrying the facilities with the local community.

I believe if north Longford could be gathered together, under the advisement of a good body - let's not wait for any handouts - that the location is one of enviable opportunity.