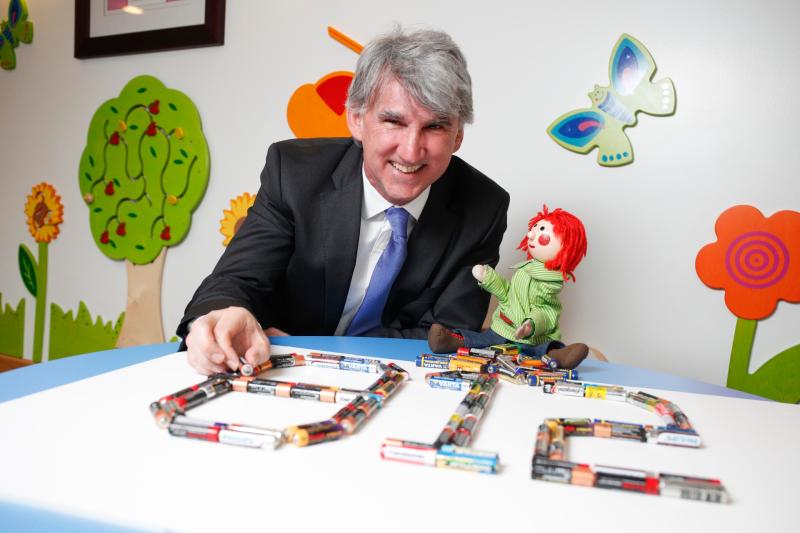 WEEE Ireland, Ireland’s largest battery recycling scheme have announced that they powered through to recycle 812 tonnes, the equivalent of 32 million AA batteries, in Ireland in 2016.

With a target to recycle 45% of all batteries placed on the market in Ireland by their members in 2016, WEEE Ireland called on the people of Longford to re-charge their recycling habits to help Ireland achieve its target.  WEEE Ireland are delighted to announce that Longford’s monumental efforts paid off.

Not only was the target achieved, the Irish public went above and beyond, recycling 11 million more AA batteries than 2015.

LauraLynn, Ireland’s Children’s Hospice has been WEEE Ireland’s charity partner since 2011.  Since then, every battery recycled by the public in the blue WEEE Ireland battery boxes has gone towards a donation fund for the charity.  With the help of an old friend, Bosco, WEEE Ireland is delighted to deliver a further donation of €50,000 to LauraLynn, bringing its overall donation since 2011 up to a staggering €285,000.

By achieving these huge battery recycling figures through the efforts of the public, WEEE Ireland has been able to provide critical funding for the palliative care services for children with life limiting conditions cared for at LauraLynn.  The €235,000 raised to date, and the additional €50,000 donation  has helped LauraLynn provide a home-from-home for families of children with life limiting conditions, where they can avail of specialised medical care as well as emotional, social and spiritual support to help them cope and live life as normally as possible.

More than 3,800 children in Ireland have a life limiting condition and for families caring for them is around the clock for many years, through crisis and uncertainty where every facet of normal family life is affected and changed.

Commenting on this huge achievement WEEE Ireland CEO Leo Donovan said, “We are delighted to announce that WEEE Ireland surpassed its EU waste battery recycling target for 2016, proving that the people of Ireland have what it takes to make Ireland a global leader in the management of waste electrical and electronic goods.  I want to say a huge thank you to every person in Longford who recycled even a single battery, because they all counted, together through schools, your local retailers, supermarkets like Aldi or local recycling centres we collected the equivalent of 32 million AA batteries, and that is an incredible achievement.  What’s more, in doing so we are also supporting the amazing work of LauraLynn, and with your help we look forward to being able to continue to contribute to such a worthwhile cause – so keep recycling your batteries!”

Stressing the importance of the WEEE Ireland donations, Sharon Morrow CEO of LauraLynn added; “We are so grateful to be receiving this donation from WEEE Ireland.  LauraLynn depends on the generosity of companies like WEEE Ireland and the general public in order to keep providing our much needed care, to the tune of €3.5 million every year.  The €50,000 being donated today by WEEE Ireland – as a result of their enormously successfully battery recycling campaign – gives us a huge boost and brings their donations to LauraLynn since 2011 up to a staggering €285,000.”

On behalf of WEEE Ireland and LauraLynn, brand ambassador Bosco would also like to say a huge ”Thank You” to all the boys and girls in households and schools in Longford who recycled their waste batteries in the blue WEEE Ireland battery boxes, local recycling centres or at public collection days. Each and every battery that has been recycled is going towards this great cause. Together we have and can continue to make a visible difference!

The achievement of this success is widespread, teachers and students have incorporated waste battery recycling into their school recycling activities by joining the WEEEPledge programme. An impressive 1 Million of waste AA batteries were recycled through WEEEPledge in 2016 and contributed significantly to the overall increase in the amount of batteries recycled in 2016.