Getting right to the heart of Marfan Syndrome 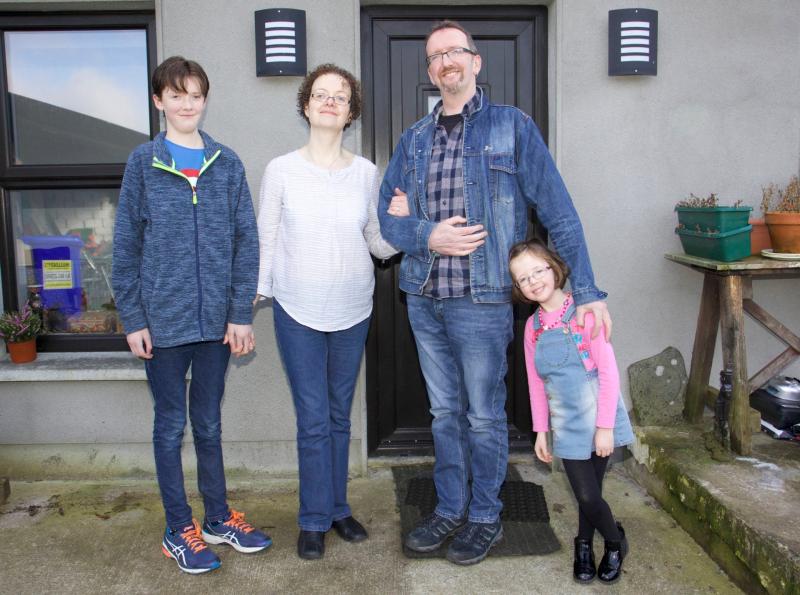 Above: Oisin, Annie, Sean and Emily Mulroy - three of whom have been diagnosed with Marfan Syndrom. Below: the three family members with the condition. Photos: Michelle Ghee www.gphotos.ie

Marfan Syndrome is a genetic disorder that affects the body's connective tissue.

This month is Marfan Syndrome Awareness Month and the Longford Leader spoke to the Mulroy family - Annie, Séan, Oisín (11) and Emily (5) - from Killoe where three out of four members have been diagnosed with the syndrome.

The family of four went for genetic testing after 11-year Oisín was diagnosed with Marfan Syndrome in 2015.

Following that, it then emerged that Séan and Emily also had it.

The syndrome affects the connective tissue that holds all the body's cells, organs and tissue together.
It also plays an important role in helping the body grow and develop properly.

For the Mulroy’s it all began with a random visit to a hospital in Castlebar when they thought Oisín, their eldest child had appendicitis. 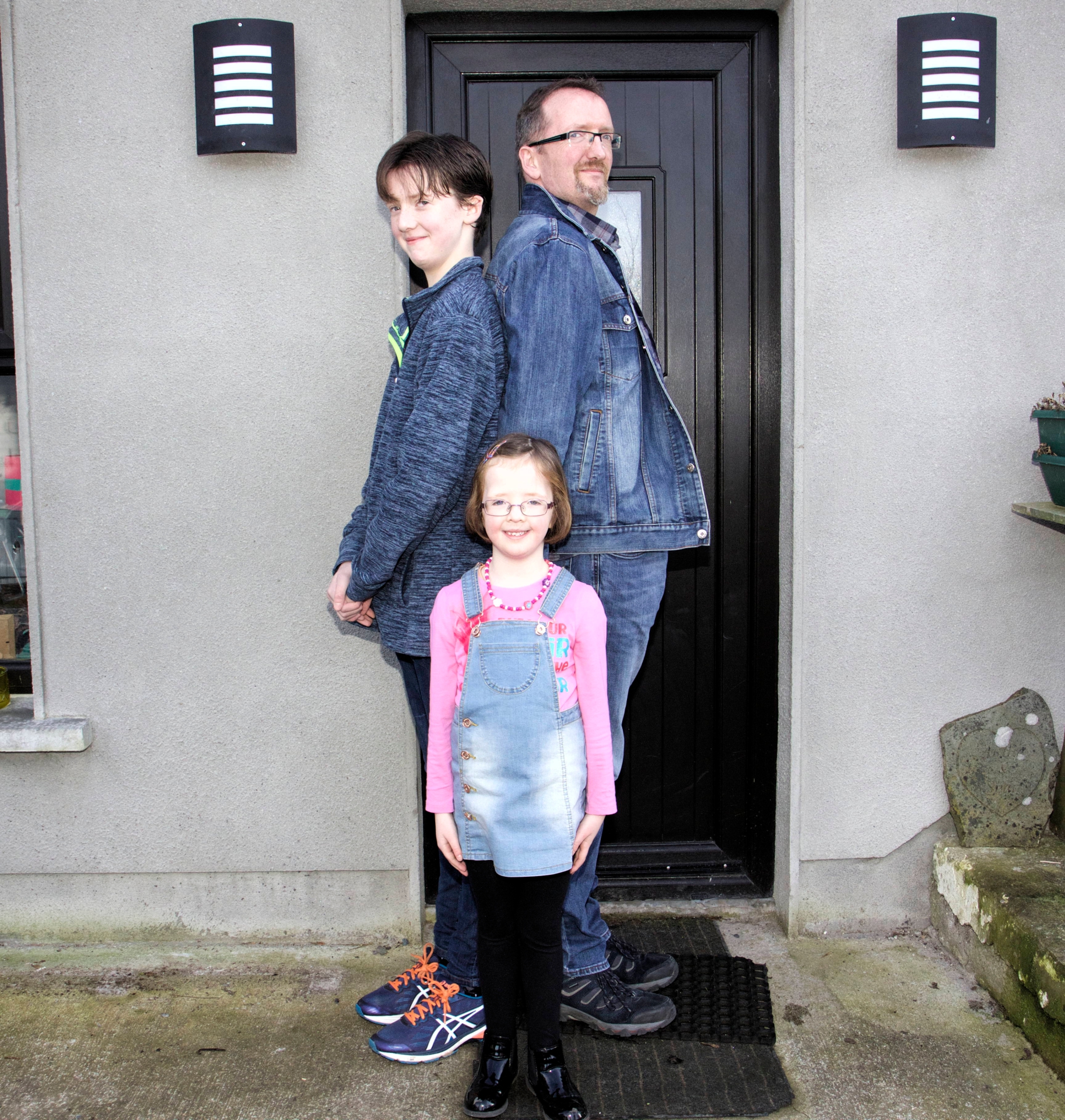 The family had been on a visit to Séan’s father when the situation developed. That was 2012 when Oisín was just seven years old.

“When we went in the doctors they were more fascinated with Oisín’s height and how thin he was,” Annie told the Leader. Currently, Oisín at 11-years-old, is nearly six feet tall.

“He also has a dip in his chest which is medically known as Pectus Excavatum - a congenital deformity of the anterior thoracic wall in which the sternum and rib cage grow abnormally.

“In the heel of the hunt there was no appendicitis but the doctors insisted on carrying out genetic testing.”

Some tests were carried out and the results came back. There was nothing to worry about, the Mulroys were told. Nothing had shown up.

But 12 months later when Oisín attended the hospital for a review a second doctor indicated to the family that some of the tests may have proved inconclusive.

The Mulroys asked at that point if they could be referred back to their own hospital - the Midland Regional Hospital in Mullingar and their request was granted.

When they attended there, Dr Dorothy Niall, Trauma and Orthopaedic consultant for Tullamore and Mullingar hospitals took over their case.

“She arranged for Oisín to be reviewed in Crumlin where he met with cardiologists and had his spine reviewed,” continued Annie.

“While there are a lot of physical traits, you need to know genetically whether you have it or not.”
Oisín was then genetically tested for the syndrome.

The family opted for the private alternative because they were desperate for Oisín to start the necessary treatment as soon as possible. In December 2015 it was finally confirmed that Oisín Mulroy had Marfan Syndrome.

However, it wasn’t over by a long shot, because the medical team then needed to determine if his condition had been spontaneous or passed on to him by his parents.

“We were asked a raft of questions at that stage and there was nothing that we could think off, so we did the test and within a month it was confirmed that Séan was a carrier and Emily also had the gene,” Annie added, before pointing out that her husband was then referred to the Mater Hospital in Dublin.

That was 2016 and even though the Mulroys were endeavouring to stay as positive as possible, a lot was happening very quickly with little time to take it all in.

Meanwhile, the Mater Hospital has a state of the art Marfan clinic attached to it, so the Mayo man was immediately able to access the necessary treatment and supports that he required.

When he was examined at the clinic it was soon determined that Séan’s aorta was so enlarged, surgical intervention would be necessary to deal with the matter.

After his assessment, Séan was told that he would be called for his operation early in 2017 and he is currently on standby waiting for that call.

Séan will undergo full open heart surgery when he is called and will need at least three months to recuperate thereafter.

“Obviously emergency situations arise and elective surgery gets priority, but the only thing we can do is to keep in contact with the clinic on a regular basis and ensure that as soon as an opening arises, Séan gets his surgery done,” continued Annie.

“To date there is no news but he might only get a week’s notice in relation to a call up.”

Séan’s easy going nature and fun filled personality probably stood him in good stead in the months and weeks before his diagnosis and indeed right up to the point where he was told surgery was his only option.

He said that when it finally came to light that he was a carrier, “I kind of half expected it”.
In his 40s, Séan is well known across the midlands for his musical talents and works as a technician at Backstage Theatre in Longford town.

“I began to think that I was probably the likely candidate in all of this and you begin to start thinking about other things in your own family,” he added.

My dad, who wasn’t particularly tall, was always very skinny and had very long arms, so while I was slightly shellshocked initially, I am more relieved at this stage.”

Séan went on to say that he wasn’t particularly squeamish around operations “or that sort of thing”, so facing the surgery and getting it done was to the fore in his mind now.

“Being diagnosed, finding out about this and getting surgery seems a lot better to me than the flip side of all this,” he smiled. The flip side being sudden death.
“I did have an angiogram and was told that other than my enlarged aorta, I am as healthy as a hare,” he laughed.

“My circulation system is spot on; my cholesterol is low - it’s just that I have a big floppy aorta."

With regards to Emily, she too has Marfan Syndrome and suffers with hypomobility which results in the reduced movement of her joints. Pain is typically felt on one side of the lower back or buttocks, and can radiate down the leg.

“She too has had an echo and will continue to have that every 12 months,” added Annie.

“Both Oisín and Emily have had ophthalmology appointments because the retina can detach with Marfan Syndrome.

“There is so much in the body that can be affected by this syndrome and there is also a whole spectrum of things that you can have, but yet, you may not have Marfan Syndrome.”

At the moment the Mulroy children are doing well. Dr Niall referred them for Occupational Therapy and Physiotherapy - services they can access at the Phoenix Centre here in Longford town.

“This is a blessing because we don’t have to travel too far,” added Annie.

“Oisín will have to have surgery; we know that because he has significant Pectus Excavatum, so if he continues to grow at the pace he is doing, his breathing may become compromised.

“Day to day he is fine - he may get fatigued a bit more than other kids but that is fine.”

The Mulroys have received great support from everyone including from the staff at St Teresa’s National School in Killoe where the children attend and from the greater community and their friends.

"Our own GPs have been great; the local hospital; Dr Niall has been brilliant,” said Annie, before pointing out that the staff and teachers at Killoe NS had been “amazing” to the children.

“They told us that if any more supports were needed then all we had to was say the word. The local HSE staff at the Phoenix Centre have been so supportive as have our neighbours and friends.”