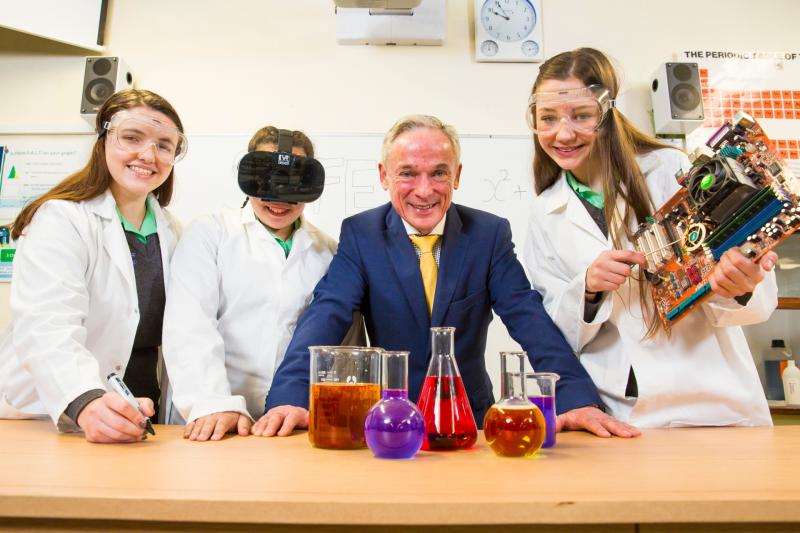 Pictured with Minister for Education and Skills Richard Bruton TD at the launch was (from left): Alina Ciobann, Mia Byrne, and Valerie Yevtushenko.

Minister for Education and Skills, Richard Bruton TD launched the 10th annual SciFest and called on second-level students from Longford to demonstrate their science, technology, engineering and maths (STEM) skills.

Since its inception in 2008, over 40,000 students have participated in the competition, which represents a year on year increase of 23% in participation.  Supported by Science Foundation Ireland, the aim of SciFest is to give students of all abilities the opportunity to develop research, problem solving, critical thinking and presentation skills.

The closing date for SciFest 2017 is Friday, March 10. In SciFest, second-level students showcase STEM projects at a series of one-day science fairs held locally in schools and regionally in the 14 Institutes of Technology, DCU and St. Mary’s College, Derry. The winners from each regional science fair will go on to compete at a national final in November 2017. The national final winner(s) of SciFest 2017 will be presented with a trophy and will represent Ireland at the Intel International Science and Engineering Fair (ISEF) 2018 in Pittsburg, Pennsylvania. SciFest is funded primarily by Science Foundation Ireland, Boston Scientific and Intel Ireland.

Speaking at the launch of SciFest 2017, Sheila Porter, SciFest Founder and CEO said: “2017 is an important year for SciFest as it marks our 10th edition of the competition. Over the last 10 years we have had the opportunity to experience some of the best young minds that Ireland has to offer.  2016 was our best year ever with over 8,000 students participating and exhibiting their projects at local or regional science fairs all across the country and we hope to build on this success in 2017 and beyond. As always, our aim is to develop a passion for STEM, and to promote inquiry-based learning, creativity and innovation among second level students from Longford.”

Richard Bruton TD, Minister for Education and Skills said: “It is a pleasure to launch SciFest 2017, here at St Mary’s Secondary School in Killester. SciFest is now in its 10th year and I wish to congratulate all the organisers, the Institutes of Technology and DCU, and indeed the participating schools and teachers on reaching this important milestone. For the generation of children currently in school and about to enter it, creative thinking and problem-solving skills will be absolutely key to how they develop and achieve their potential. In particular, their ability to think critically and develop solutions will be vital for their prospects in life. Our ambition is to make Ireland’s education and training system the best in Europe within a decade. Providing STEM Education of the highest quality is essential if Ireland is to become an innovation leader at the forefront of technological and scientific change. We need to encourage our existing students, as well as future generations of students, to understand and embrace areas related to STEM.  SciFest plays an important role in instilling in our students that a STEM education can open many doors and by encouraging young people to develop a love of these subjects and to engage their passions outside the traditional classroom setting.”

Last year’s overall national final winner was 6th year student Caolann Brady from St Wolstan’s Community School, Celbridge, Co. Kildare, for her project which focussed on the natural treatment of asthma through humming and breathing techniques as opposed to using inhalers and nebulisers. Caolann will represent Ireland at the Intel International Science and Engineering Fair (ISEF) 2017 in Los Angeles, California.