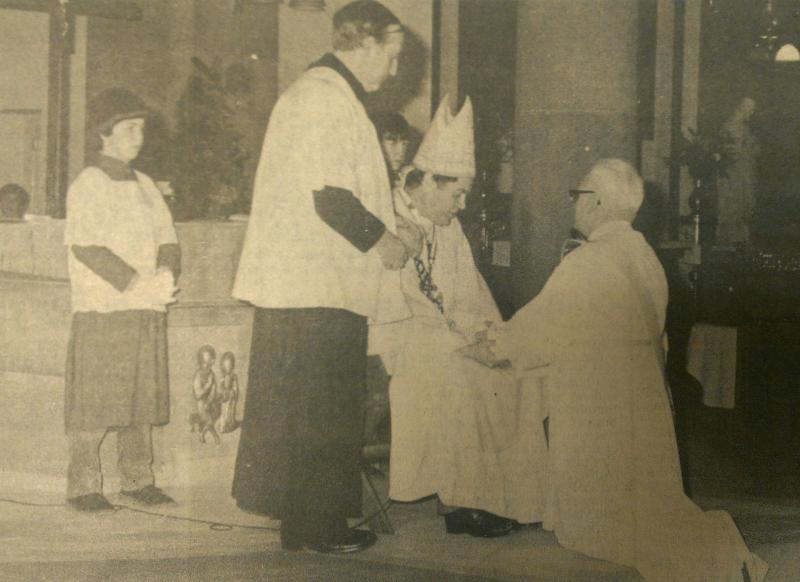 In February, 1982, the ordination of Fr Tommy Devine in St Mel’s Cathedral, Longford entered the record books as he was 73 years old at the time.

Ordained a Deacon in 1981, his ordination was performed by the Auxiliary Bishop of Dublin Dr Brendan Comiskey.

In reference to Tommy’s age, the Bishop said it would mean a re-write in the Guinness Book of Records. Dr Comiskey was standing in for the Bishop of Ardagh and Clonmacnois Dr Daly who suffered a mild heart attack earlier that week. 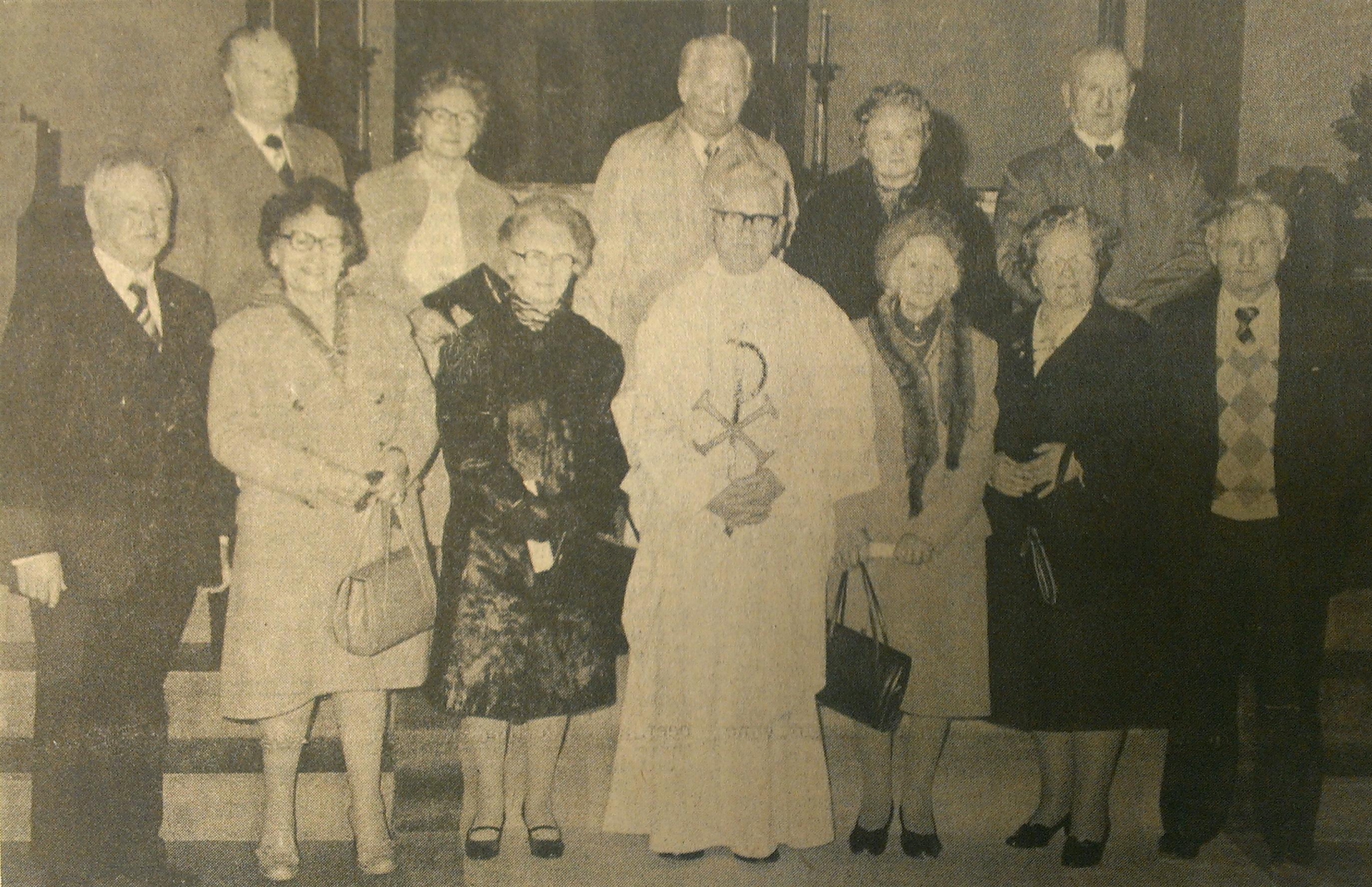 Fr Tommy Devine and his family, with the original caption for the photo; 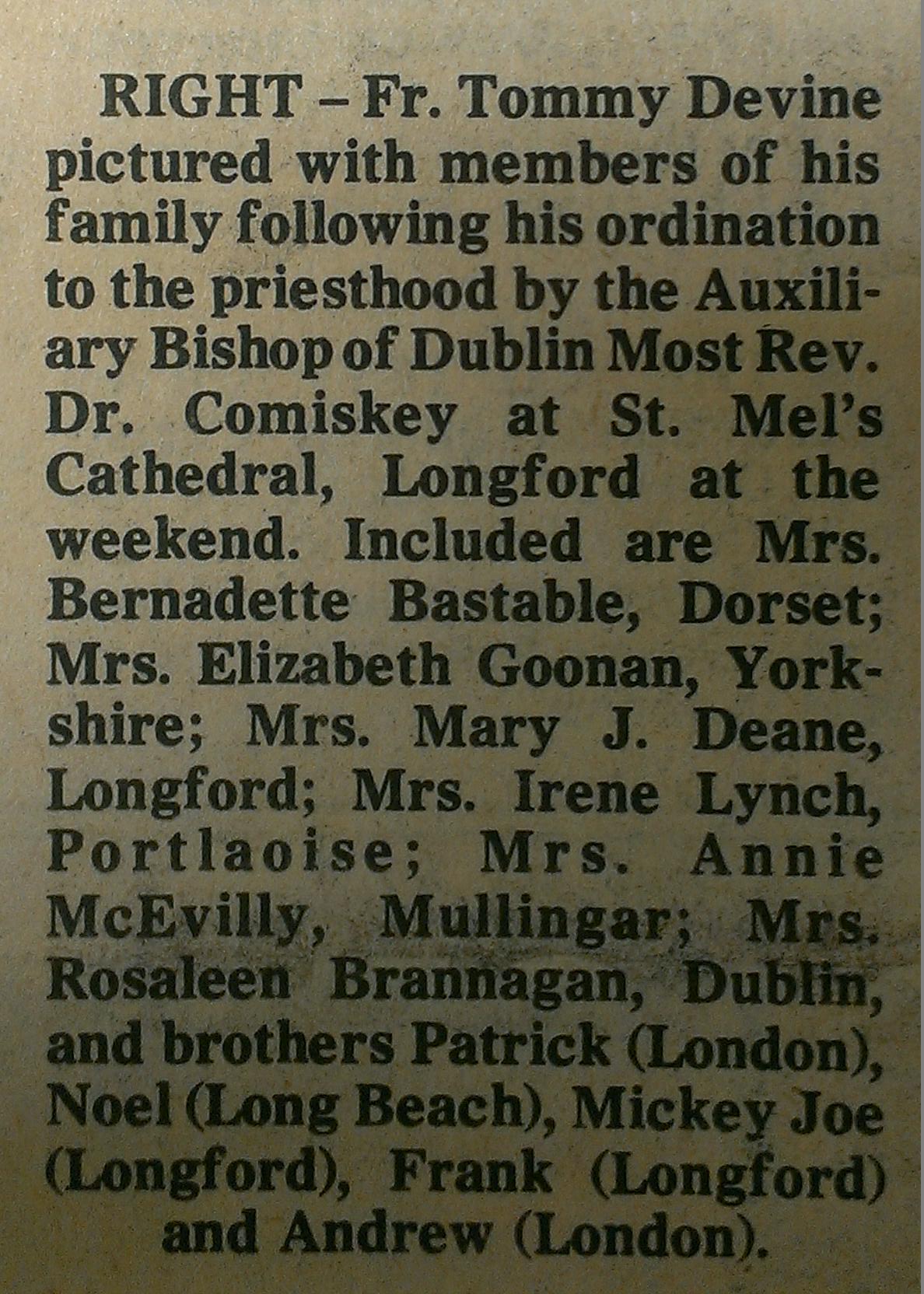 Here is an excerpt from the report that appeared in the Longford Leader following Fr Devine’s ordination;

“Fr Devine was both organist and choirmaster for the past twenty-five years. He studied music while attending St Mel’s College and later spent four years at the Royal Ireland Academy of Music in Dublin.

“However, he returned to work in the family poultry business in 1940 and later succeeded Mr Seger in the role of choirmaster and organist in St Mel’s.

“Under his direction the cathedral choir rose to over 60 members. He also established a boys choir and the church music was rearranged to suit female voices.

“In recognition of his long service to the cathedral choir, the group presented him with an altar missal. And at his first Mass on Monday evening the choir sang one of Fr Tommy’s own compositions and some of his nephews and nieces brought up the Offertory gifts to their uncle, the new priest.

“Fr Devine is expected to remain in Longford and will continue as choirmaster and organist in the cathedral.

Click on the link of this @RTEArchives tweet to view an RTÉ News report broadcast on February 8, 1982 on the ordination of Fr Tommy Devine. The reporter is Peter McNiff.