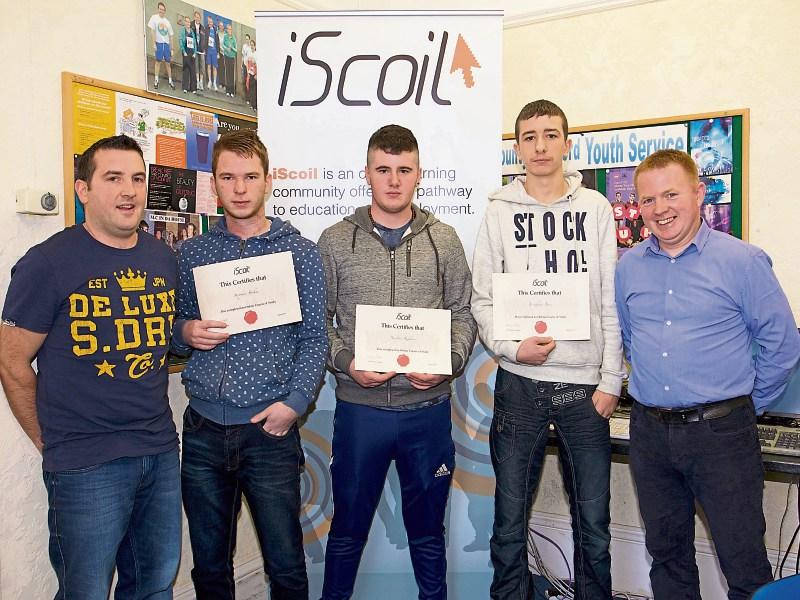 Last Thursday was a proud day for three young Longford men and their families, as they were presented with their  QQI Level 3 certificates.

Jonathan Joyce, Stephen Stokes and Nathan Killian have all been engaging with County Longford Youth Services (CLYS), which is a part of Longford Community Resources CLG, for the past 12 - 24 months, taking part in the Top Class programme.

This programme, which has been run by CLYS since early 2009, helps to develop young men's interpersonal and social skills and helps them to gain confidence, while also giving them a second chance at education.

The programme, according to Acting Co-ordinator of CLYS, Mark Noble, is tailored to young men who are not “school shaped”.

Mark and Youth Worker and iScoil Support Worker Mícheál Wall work closely with the young people to help them to build up confidence in themselves and to learn important life skills.

As part of the Top Class programme, too,  the participants engage in iScoil, which allows them to learn subjects including maths, personal and interpersonal development and media studies. As they complete and pass these modules, they get a certificate, and once they get six certificates, they receive their QQI Level 3 award, which is the equivalent of their Junior Certificate.

“Once they have qualified, they can go on to employment, further education, Youthreach, training courses or apprenticeships,” Mark explained.

Those who take part in the programme must be referred to CLYS by the Educational Welfare Officer with the Longford Westmeath Education and Training Board, Marie Fitzpatrick, who was on hand on Thursday to see the three young men celebrate their success.

“A lot of the young lads that come in here would have been out of education completely or were on the verge of being expelled from school,” she explained, before paying tribute to the work the CLYS does.

The boys' parents were elated on the day, seeing their sons collect the certificates that show off the hard work they have completed.

School didn't suit Nathan Killian, his mother Anne Marie Penrose explained. She pointed out that just getting out of bed was a daily battle for her son.

“He wanted to learn but school was not for him.

“When he came here,” she revealed, “there was a huge difference. His mood seemed to just lift.

“People here can understand him and give him the help and support he needs.”

Having left school at 15, 16-year-old Nathan is now facing into a future that he could only have  dreamed of before.

Studying under Youthreach in Ballymahon, Nathan is hoping to join the Army once he turns seventeen.

“It's after making him who he is,” Ms Penrose smiled.

Stephen's mother Bernadette, meanwhile, was beaming as she surveyed the certificates her son has earned over the past number of months.

“He's very bright and I'm very proud of his good work,” she smiled.

Extending a sincere thanks to Mark and Mícheál, Jonathan's father Joe admitted that the course had completely turned his son around.

“It's made a big difference in Jonathan,” he nodded. “In his behaviour, everything.

“I'm a happy man today with him! I'm very thankful for what they [CLYS] did for Jonathan.

“The boys are good for one another and I'm sure they'll stay friends.

“Jonathan is going on 17, so it's all uphill from here for him.”

In between talking and laughing with their mentors and family, the three awardees were optimistic about their own futures.

“I'm in Youthreach now and I'm going to the Army,” Nathan explained. “It's something I've always wanted to do, since I was young.”

Stephen pointed out that the shorter hours and easier subjects made a big difference to him when he compared it to school,  while Jonathan agreed that the course was more than worthwhile.

“We're delighted with the programme,” CEO of Longford Community Resources, CLG Adrian Greene told the Leader. “It fits in very well with what we do as an organisation in supporting individuals and the betterment of people's lives.

“It's not just about sitting down and learning,” he added. “There's a more personal side to it.”

The Top Class programme is a proven success and has helped many young men just like Jonathan, Stephen and Nathan, to reach and even exceed their potential.

It doesn't end with the certificates, either, as Mícheál explained that they regularly made contact with their 'alumni' to hear how things are going.

“More than thirty young men have benefited from this programme, and out of that we have had zero failures,” Mícheál revealed.

“There has been no-one that dropped out of it.

“Some of the lads have gone on to do third level education, one or two have gone back to school.

“One started the course in January and finished it in June and went straight into his Leaving Cert class.

“The whole programme is catered to each invidual student. We like to concentrate on quality work, not quantity work.”

Things have changed and improved in the programme over the past number of years, but one thing that remains the same is the service's dedication to providing young men with a second shot at education.

That, and the happiness they feel watching the programme participants walk out towards a better life.