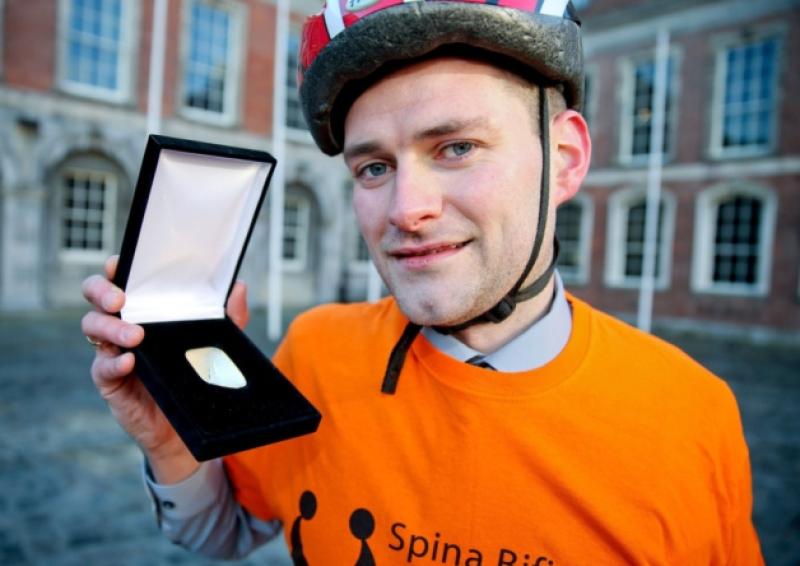 A young Killoe man was the proud recipient of the prestigious Gaisce Award last week.

A young Killoe man was the proud recipient of the prestigious Gaisce Award last week.

Emmet Ryan (27) who is closely associated to Longford Town Football Club, received his gold medal from President Michael D Higgins after completing an adventure journey in which he cycled from Trinity College to Gorey. He also worked with children with Spina Bifida on a residential project and learned to swim!

It has been a challenging and exciting few months for the local lad.

â€œThe Gaisce Award sees a number of challenges set by the President and it is about achievement,â€ Emmet, who is the son of William and Geraldine, told the Leader on Monday.

â€œI had to set a goal to achieve something for myself and I learned to swim; in the community section I did a lot of working with children at the football club and with the residential project, I worked for two weeks in a Spina Bifida childrenâ€™s unit in Dublin.

â€œOver the course of three days I cycled from Gorey to Kildare; Kildare to Wicklow and Wicklow to Dublin; it was an amazing experience.â€

Gaisce is regarded as the most prestigious award in Ireland for young people aged between 15 and 25. The Award is a self-directed personal development programme in which participants are supported and mentored by a more experienced person, a volunteer, a Presidentâ€™s Award Leader (PAL), to set and achieve a personal challenge over a period of time.

â€œMy participation in the awards was great; I used to be a very shy person and now I have more confidence in myself,â€ continued Emmet.

â€œI learned a lot of new skills and I am able to communicate so much better now; I donâ€™t even mind getting up in front of other people and talking, whereas before, I found that a very tough thing to do.

â€œI also made a lot of new friends along the way and was left very impressed by the achievements of others. One lady received an award and she was blind, so that was amazing to see.â€

Gaisce is an old Irish word which means â€˜a great achievementâ€™ and it is in the spirit of this meaning that the programme challenges young people to set and pursue personal goals in four different areas of activity.

â€œMy plan now is to become a Gaisce PAL and in doing that I will be able to help others to achieve their goals on the programme,â€ the Killoe native concluded.