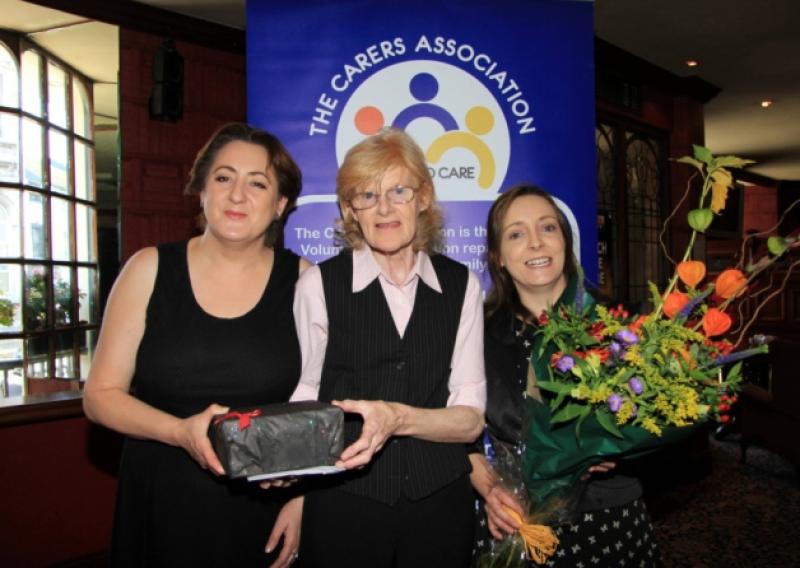 This year’s Longford/Westmeath Carer of the Year has been awarded to Longford town woman, Mary Carrig who lives on the Battery Road.

This year’s Longford/Westmeath Carer of the Year has been awarded to Longford town woman, Mary Carrig who lives on the Battery Road.

The Gortletteragh native has been living in Longford town for many years now and has dedicated her life to caring for the needs of others. She has had her fair share of heartache and troubles, but this year’s very deserving award recipient said that her role has been “very rewarding” and she understands the many “crosses” that people carry in their daily lives.

“I’ve been a carer all my life, and I want to thank the Longford Carers Association for nominating me for this award,” reflected Ms Carrig reflected last week. “My brother was special needs and I took care of him when I was at home. My five sons died from brain hemorages, one of them - Julian - lived until he was nine years old, and when he died I was devestaed.”

Mary cared for Julian on a daily bases throughout his short life. He was mentally and physically disabled and was unable to walk or talk. After managing his care and fighting for Julian’s rights, she eventually secured medical support for her son at a specialist clinic in Hungry. However, despite making improvements while undergoing the medical care overseas, Julian died while the family was making its third journey with him to Hungary.

“Julian died 20 years ago and his death still haunts me,” she continued. “My brother got sick and for six years he was going from hospital to hospital in an effort to determine what was wrong. Eventually he was diagnosed with dementia - I cared for him until his death two years ago. I also took care of my father and mother both of whom had strokes and I tried to meet the needs of each family member and care for them to the best of my ability.”

Mary, who has three children - Marthella, Ladora, Mirivano - and one adored grandson, Julian is currently caring for her husband who was diagnosed with cancer last year. “I suppose, I have never had a break from caring, it is what I have always done, but it really is a very rewarding role,” she added. “There is such poverty out there now and people are carrying heavy crosses, so there is great suffering in the world. But I have learned to never give up hope, we are nothing without hope.”