Property prices down in q1 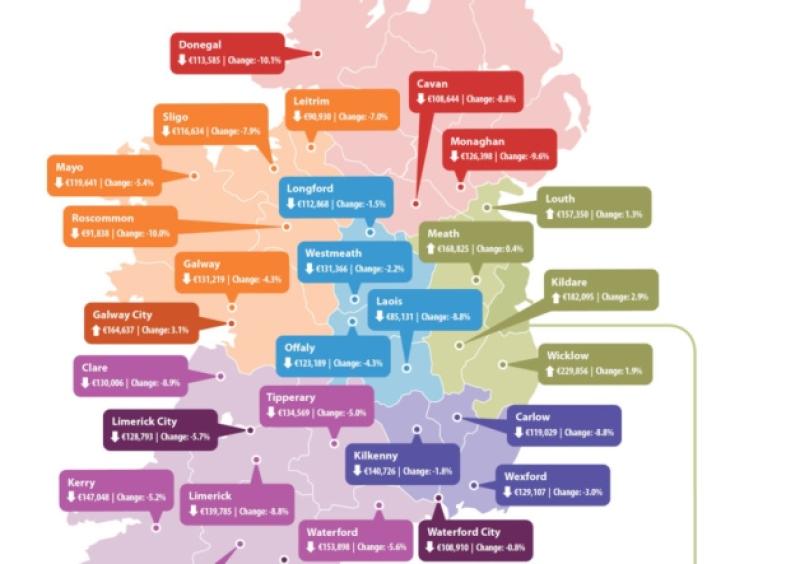 House prices in Longford fell by 2 per cent in the first quarter of 2014, compared to the same period last year, according to statistics compiled in a report by property website Daft.ie.

House prices in Longford fell by 2 per cent in the first quarter of 2014, compared to the same period last year, according to statistics compiled in a report by property website Daft.ie.

It was a similar story elsewhere in the region, with Leitrim being one of the main movers, recording a price decrease of 7 per cent and an average house price of €90,930.

Nationally, the average asking price is now €177,000, which represents a 3.5 per cent increase, which is 53 per cent lower than peak prices.

In Dublin, prices have increased by 15 when compared to the first three months of 2013, while Galway and Cork also recorded annual increases of 2 per cent and 3 per cent respectively.

“While those based in the capital will understandably focus on rising inflation in property prices, perhaps the more significant development is elsewhere,” said Daft.ie’s resident economist, Ronan Lyons. “For the first time since 2007, the average asking price outside Dublin rose on a quarterly basis. This may be the first indications that a better match is being found between demand, which will be boosted by the fall in unemployment, and supply, which has eased back considerably in the last two years.

“This quarter also sees the addition of a measure of housing market expectations to the Daft.ie report. This shows that the supply of housing is perhaps the most pressing concern for those active in the housing market at the moment. In general, expected changes in house prices seem grounded but further increases in expectations, particularly in Dublin, may be a cause for concern.