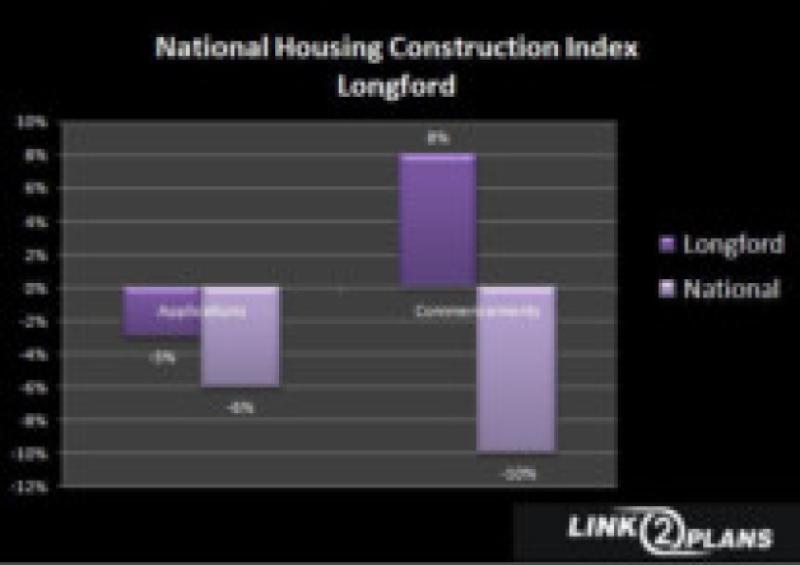 While the number of planning commencements has dropped nationwide, County Longford has bucked the trend with an increase on last year’s figure.

While the number of planning commencements has dropped nationwide, County Longford has bucked the trend with an increase on last year’s figure.

The data, which is contained in the latest National Housing Construction Index report, shows that Longford was one of just five counties in the Republic of Ireland to report an increase in the number of construction commencements in the past 12 months.

The other counties are Roscommon, Meath, Dublin and Wexford.

Longford joined Meath inhaving the join-second highest increase in commencements in the country, with a rise of eight per cent since last year, while the county with the highest rate of commencements was Roscommon, where the figure jumped by an incredible 51 per cent.

Meanwhie, Westmeath, Cavan and Leitrim experienced decreases of 47, 28 and 21 per cent respectively.

In the eight months from January to August 2012, Longford reported 24 planning commencements, while there were 26 in the same period this year, where the nationwide average showed a decrease of 10 per cent.

On a negative note for Longford, the number of planning applications has declined by three per cent, though this drop has tapered off from the five per cent decrease within the county last year, and is less than the national average figure, which is down by six per cent.

Sixty planning applications were lodged in Co Longford between January and August last year, while there were 58 during the same period in 2013.

Leitrim suffered the highest drop in planning applications nationally during this time, with a decrease of 39 per cent, while Leitrim, Westmeath, Roscommon and Cavan experienced respective contractions of 39, 16, 15 and three per cent.

According to Danny O’Shea of Link2Plans, the company which compiles the National Housing Construction Index, there is an “overall trend of falling planning applications”, but the rate of decline is less pronounced than last year, and in turn this may be a contributory factor in the increase, or at least a slowing decrease, in the number of commencements.

However, Mr O’Shea also added that Longford continues to see a decline in the number of applications made, so the rate of commencements is expected to remain static for some time.