'It was like winning the lottery' - farmer, Mark McMenamin 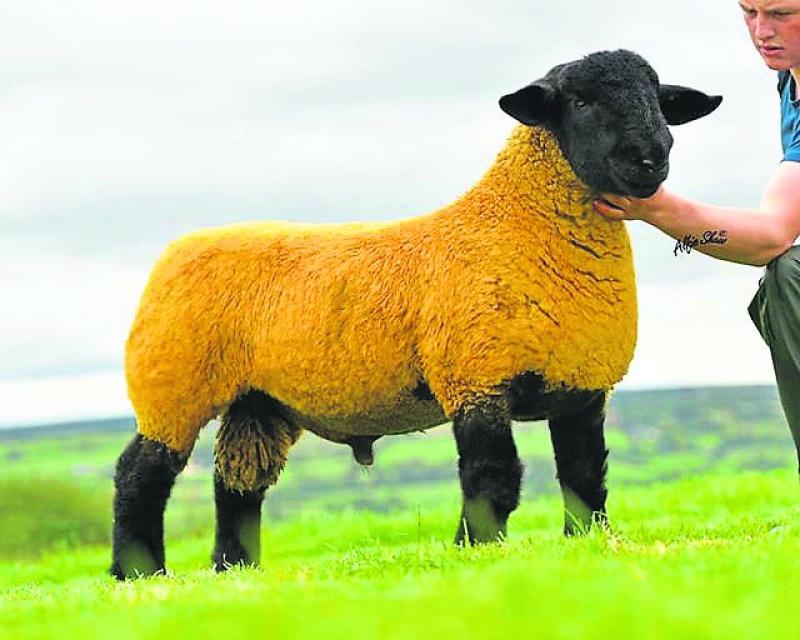 An 18-year-old Killygordon farmer has secured what is believed to be a record-breaking overall top price of 50,000gns for a seven month old ram lamb at the Suffolk Sheep Society's Scottish Area sale at Lanark last Friday.

It came from Darragh McMenamin's Mullinvale flock which is based in the townland of Mullingar on the Convoy Road and sold for the top price of 50,000gns which equates to around €55,000.

It was the first time that sheep from the flock have been sold in Scotland and to get this price was totally unexpected.
The buyer was Stewart Craft, buying for his Lakeview Pedigree Suffolks from Leslie, Fife.

Darragh and the McMenamin family run the Mullinvale Suffolk Sheep flock which breeds purebred Suffolk sheep but the 18-year-old has been the driving force in the enterprise since 2016.

The mother of this January-born ram lamb was bought from an Aberdeenshire farmer, Jim Douglas last year and sired by Plasllewelyn Pure Genius out of a Cavanagrove Catalyst-sired Cairness dam.

According to Darragh's father, Mark, who helps his son on the farm, they were over the moon with this record sale and it was a great reward for all the hard work his son had put into the flock.

"Where do we start. We're just coming down to earth after an amazing few days, ones which we will never forget. I would like to thank L&S auctioneers for a well organized sale under the current circumstances and restrictions. We would also like to thank all the bidders and all who viewed our pen.

“To us it’s a dream especially in our first year to Lanark, and it makes it all worthwhile. We're already looking forward to seeing his offspring“.”

He explained the price had to do with a number of factors such as bloodline and breeding plus the fact there was still competition between buyers which pushed the price up.

Competition
"I thought it might be worth around £25,000 to £30,000 but as you can imagine if there's a few men looking for it the price goes up. There was bitter competition for it over an extensive bit of bidding.

"When it hit the 50,000gns mark that was a different feeling altogether, it was like winning the lottery. This ram would be useful to any man's flock so he was in big demand.

“Any pedigree farmer could put that ram across the board to all his females. I think this is a record price for an Irish breeder selling over in Scotland," he said.

Mark explained the farm is involved in extensive AI and embryo work.

"It's not all sunshine, there's a lot of work that goes into the Suffolk flock. We have 38 purebred ewes and over 500 resit ewes to carry the eggs."
He thanked John Hutton of AB Europe, Malburn, Scotland and Ballycreggy, Antrim; Harbro feed and Greenvale Show Grow as well as ewe nuts from Clonleigh Co-op in Castlefin for all their part in helping this ram lamb and his overall flock stay in superb condition throughout.