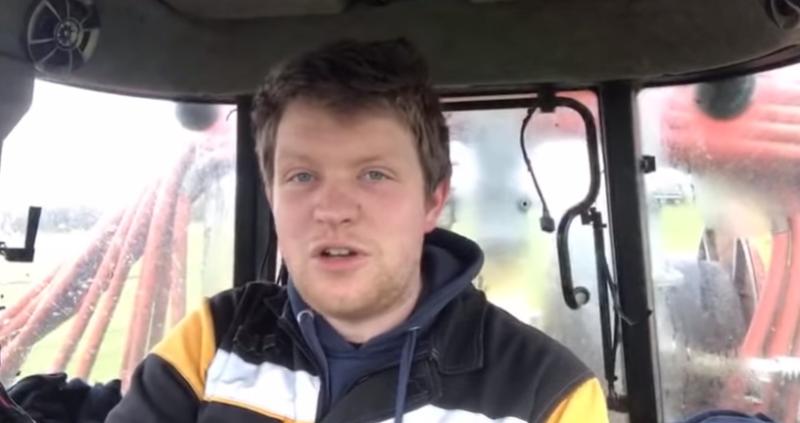 Farmer Phil in action on his farm near Killashee

Philip Stewart, known to farmers worldwide as Farmer Phil, is not your average young farmer.

Currently in his early 20’s, Philip runs an extensive dairy calf-to-beef enterprise on his home farm alongside his father, Derek, and uncle, Ian, rearing up to 400 suck calves per year. If that were not enough to keep them busy, the farming trio also run their own substantial agri contracting business, which has been in operation for approximately ninety years.

Having originally run their own dairy, tillage and suckler farm, the Stewart family implemented a change of system upon ‘Farmer Phil’ completing his agricultural degree in Gurteen Agriculture college in 2016. During this period spent studying in Gurteen, Philip was tasked with making a five-year plan for the farm at home. This is when the real changes began on the Killashee farm.

He explained: “We had to do a five-year plan on our farms at home.

“I had to do up a set of accounts and put it into the Teagasc cost control planner, which showed what the farm was making. That year, we bought 80 suck calves and the plan was that we were going to rear them, put them into calf and put them into the suckler herd.

“But I looked at finishing all of them and I saw after doing the math, that there was a nice bit of money to be made on them. So, I based a five-year plan on increasing the number of calves every year until we got up to full capacity, which is around 500 calves.”

As of 2019, the Stewarts were raising in excess of 400 calves per year, with all stock acquired from local dairy herds and slaughtered with EuroFarms at under 24 months if possible. After originally setting up his Youtube account in 2016, posting videos of a farming simulator game, Philip soon introduced yet another ‘change of system’ and began posting videos of the work they regularly carry out on their Killashee farm and thus, Farmer Phil was born.

Phil and the farm in Killashee have climbed to new heights over the past number of years, with Philip’s ever-growing Youtube account amassing in excess of 16,000 subscribers, hailing from all over the planet. The ever modest Philip, said he had no idea how big his alias would become.

He told the Leader: “I had no idea it would get this big.

“I didn’t really know what to expect when I got started, I just went with it.

“The last 12 months have been amazing and the opportunities the channel has brought me, such as working with various different companies and being invited as a guest the Longford ploughing, has been astounding."

Philip, who previously competed in the novice ploughing a few years back, was invited along to the Longford ploughing championships, which were due to take place on Sunday, March 22, as a celeb guest.

“It was a great honour to be invited to the ploughing. It is most definitely surreal to be asked, though I don’t think of myself as a celebrity as I’m no different to the next man or woman.

“All I do is just share the daily doings and goings on around the farm and contracting business.”

Continuing he said: “I competed in the novice ploughing in 2013, using my cousins ford 4000 county tractor and a 2 furrow match plough. My cousin also coached me on the day. I don’t remember where I finished but I know it wasn’t first.”

The plan for Longford ploughing championships, before its cancellation due to government advice in light of the Covid-19 outbreak, was to bring a MF6499 and Philip’s MF3690 with a four furrow plough, with Phil also taking time to meet and greet with fans. However, those plans are now on hold until 2021.

In terms of the future for Philip and his ever-expanding group of loyal Youtube followers, the young farmer will remain as busy as ever.

“The future is exciting, there’s lots of exciting things to come.

“I can’t wait for the summer and to get the two new tractors out at silage and all the videos I will make whilst at it.

“I have nothing else planned but you're more than likely going to see me at some shows throughout the year and meet me on the road going about my daily business.”