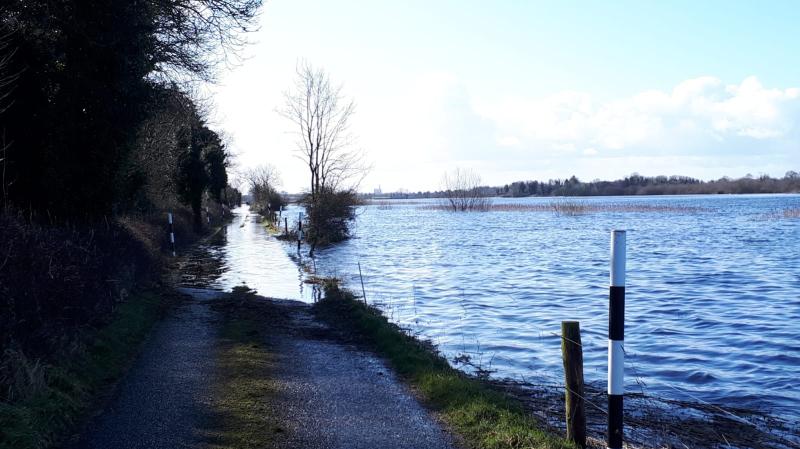 Farmland pictured to the right is submerged in water

Residents living along the river Shannon in Co Longford, have reiterated pleas for assistance on the back of repeated flooding issues facing the area.

Those living along the River Shannon in areas such as Clondra and Tarmonbarry, have been left to deal with rising waters and not for the first time, as approximately 10 years ago the same area was submerged in many feet of water.

As a result, many residents were left stranded in their homes in recent weeks, with a vintage tractor the only mode of transportation through rising waters for one elderly couple. Not only are residents affected but also farmers, with a huge amount of meadow and grazing lands submerged under water.

Locals informed the Longford Leader that these floods could have all been prevented with a ‘simple fix’, the opening of Sluice gates along the river, something previously carried out on a regular basis many years ago which, in turn, prevented rising waters.

“The people along the tributaries are the real ones that are suffering. We are the people that are paying the price.” said one resident.

Residents say despite contacting many political representatives over the issue they are yet to receive any sort of correspondence. Many farmers recently met with IFA president Tim Cullinan at the recent Longford IFA AGM in the Longford Arms Hotel, where he pledged his support to farmers over the flooding troubles.