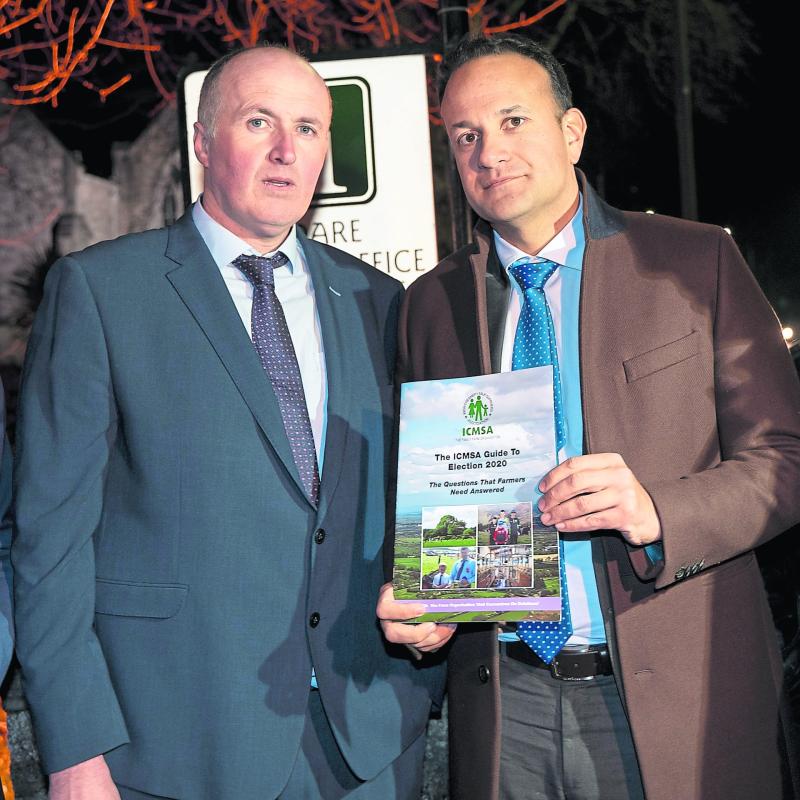 The ICMSA have stated that they intend having a copy of their ‘ICMSA Guide to General Election 2020’ on its way to every candidate standing in a rural constituency and association officer within days.

ICMSA President, Pat McCormack, met Leo Varadkar in Adare last Tuesday night and handed over a copy of the document which is subtitled ‘The Questions That Farmers Need Answered.

He urged the FG Leader to note carefully the key issues identified by the farm organisation and divided into easy-to-understand sections on ‘Price, Income and Margin’, ‘Dairy’, ‘CAO Post 2020’, ‘Fixing Ireland’s Beef and Livestock Sector’, Environment, Sustainable Farming and Renewables’ and ‘Farming and Finance’.

Mr McCormack said the document has been designed specifically to alert candidates to the issues identified as most pressing for our farming and wider rural communities at this point and also to solutions that he characterised as “do-able, practical, fair and progressive”

But Mr McCormack said it was already perfectly obvious on which two issues the farmer and broader rural vote might well depend.

“Before a word has been uttered, we already know that two issues will dominate this election as far as farmers are concerned.

“Firstly, the relentless pressure on farmer income and farmer margin has been and remains the central point. Last year saw unprecedented and costly disruption in the sector – our biggest indigenous economic sector – as farmers broke under the pressure of producing particularly beef for prices that were less than their costs of production.

“We have farmers across all sectors receiving the same prices as their parents received 30 years ago. Everyone sympathises, but we don’t want sympathy anymore. We want fair prices. We want action. Politicians who go to farmers’ yards and doors are going to be told that forcefully and straight out”, said Mr McCormack.

Another issue, according to McCormack, is the constant attack on farmers.

He said: “The second issue that is going to dominate this Election for farmers is the constant attack on their livelihoods and the economic viability of rural Ireland by the most aggressive and arrogant elements of the environmental movement. Farmers accept the reality of climate change and accept the need for change, but we reject absolutely the idea that farmers alone will have to change their way of life.

“Every part of society will have to contribute to the increased costs of changing the way we produce food. Any candidate that comes out with ill-informed, glib anti-farmer messages will be challenged on their grasp of the facts”, said the ICMSA President.

Mr McCormack said that ICMSA is a categorically non-political organisation and does not endorse specific candidates or a specific political party. But he was at pains to add that they will not tolerate a campaign where farmers are made the ‘whipping boys’ for anyone’s pet projects or concerns.

“We have represented farm families for a long time; this is our 70th anniversary and I would strongly urge every candidate to take the time to read and become aware of both the issues and solutions that we know will work for Irish farming and the communities that depend on that,” Mr McCormack concluded.