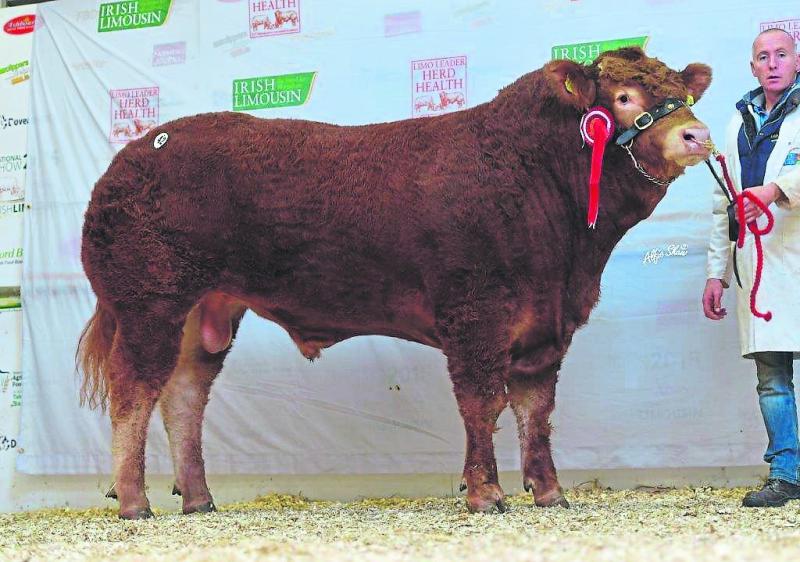 The Irish Limousin Society held their annual Roscrea Premier Show and Sale over the October Bank Holiday weekend, with the showing of males on Sunday evening, October 27, and females on the morning of the sale Monday, October 28.

It was a buyers’ market at the October sale, reflecting the current state of play in the livestock industry. The show was judged by Sarah Priestley of the noted Brontemoor herd based in Cumbria.

The Society stated, “We would like to thank Sarah for judging. Many thanks to our auctioneers George Candler who officiated at the bull sale and Denis Barrett who took charge of the heifer sale.

“We are indebted to our stewards at all events – here in Roscrea stewarding duties were undertaken by Donal Moloney, Frank Buckley and Jimmy McHugh. Many thanks to all breeders, exhibitors and the management and staff of Roscrea Mart.

“Sincere thanks to the purchasers at society sales, we wish you well with your new livestock.”

This year’s Champion of Champions was chosen as Rhyne Noah, a bull bred by Killoe farmer Mark Hagan. Rhyne Noah claimed both the top price of the sale - €8,000 - and the Senior champion title.

The champion bull was sold on the day to a fellow Longford farmer, with Edgeworthstown’s Cyril Naughton sealing the purchase with a winning bid of €8,000.

The Reserve Senior champion title went to Liscarn Neptune, with the bull then sold for the second highest price of the day - €6,000. The bull hails from the farm of Bailieboro breeder Philip Dunne.

For the full results of the show & sale visit www.irishlimousin.com.