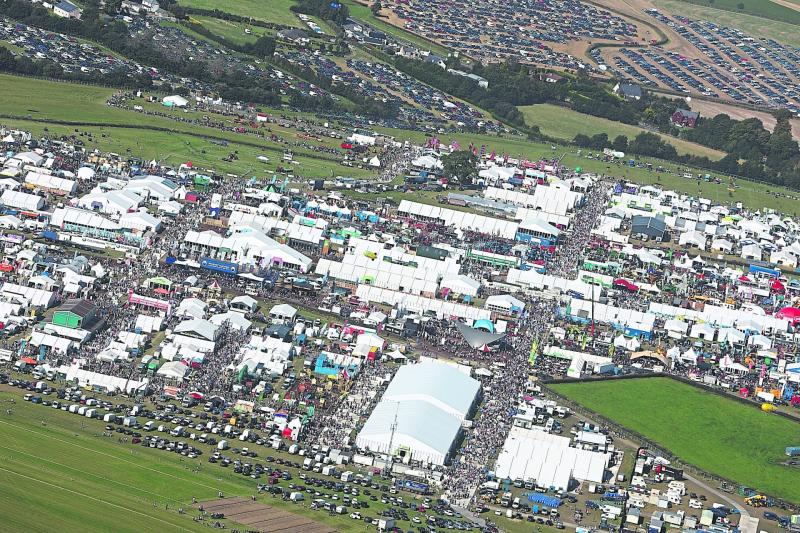 The National Ploughing championships drew record breaking attendance figures over the course of the three day event last week, with over 297,000 people taking the trip to the site in Carlow.

There was plenty of Longford interest in this year’s event, with many flying the flag for the county. One such Longfordian was Raymond Dooley of Next Generation Farm Safety.

Raymond was in attendance at the Enterprise arena, where he explained the concept of what he does and the importance of greater farm safety awareness when working on a farm.

Granard agricultural show committee member Gerry Tully was also in attendance at the event, acting as a health & safety demonstrator at the HSA stand. Gerry was on hand in his role with ‘Height for Hire’ to explain the benefits of hiring one of the machines offered by the company, when working at heights on a farm. He then gave some inside tips and tricks on how to operate said machines.

Longford food was also a major talking point at Ploughing 2019, as RTÉ host Daithi O Sé spoke to Gary Nolan of Panelto Foods. As it turned out, proud Kerryman Daithí is a big fan not only of Longford food, but the county in general, as Gary helped put Longford on the ‘foodie’ map with some passionate words about his produce - which you can watch via our National Ploughing tab online at Longfordleader.ie.

Longford farmer Enda Farrell, the recent winner of the AIB Farm Business plan of the year, was also in attendance at the ploughing, where he discussed the benefits that planning had on his farm. He notes that planning is the key to reaching all end goals on farm and spoke of the need to complete said plan using real figures to help outperform projections.

Students from Ballymahon Mercy were also among attendees at 'Ploughing 19' in Carlow.

On the ploughing front, there was success for one Longford competitor on the field, as Edgeworthstown’s Sean Monaghan took home a bronze medal. Sean finished third in the Intermediate conventional plough class and was the only Longfordian to win a medal for his efforts.

Although all other competitors may feel slightly disappointed,they all performed amicably and flew the Longford flag with pride.