Teagasc Roscommon/Longford - ‘You just get the best advice going’ 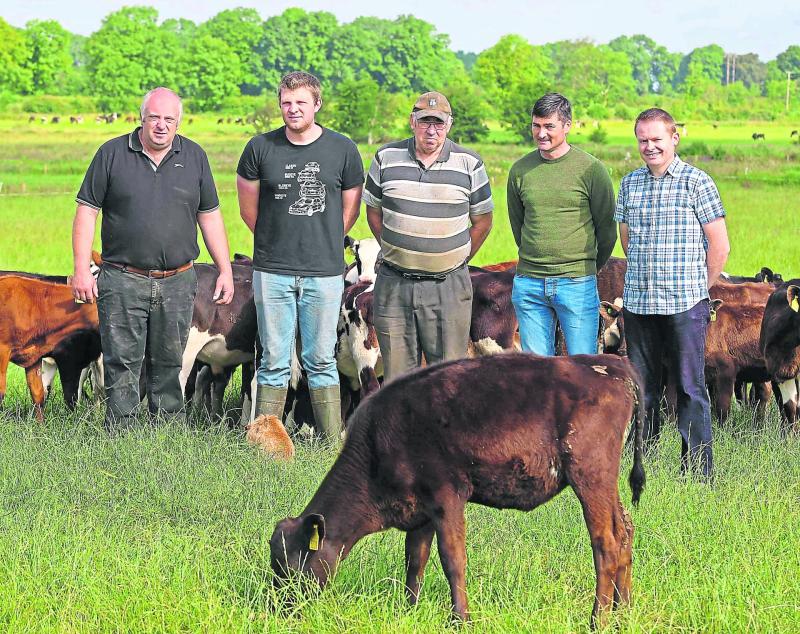 Philip Stewart is a 22-year-old farmer, running an extensive calf-to-beef enterprise in a three-way farm partnership with his father, Derek, and uncle, Ian, near Killashee, Co Longford.

A family with a deep agricultural heritage, their involvement in the industry spans back many generations. Not only are they farmers; they have also been running a substantial contracting venture since the 1930s.

The Stewart family originally ran a dairy and tillage operation, with some Sucklers and Pedigree cattle thrown into the mix, while also growing their own grain - something they still do.

Having faced significant hardship in both the dairy and suckler sectors, the family needed a change of system on the farm. This period of time also coincided with Philip’s return from Gurteen Agricultural college in 2016, where he developed some ideas of his own and a strong passion for the industry.

As part of his college education, Philip had to make a five-year plan based on the farm at home and this is where inspiration struck for the 22-year-old.

“We had to do a five-year plan on our farms,” he said.

“I had to do up a set of accounts and put it into the Teagasc cost control planner, which showed what the farm was making. That year, we bought 80 suck calves and the plan was that we were going to rear them, put them into calf and put them into the suckler herd.

“But I looked at finishing all of them and I saw after doing the math, that there was a nice bit of money to be made on them. So, I based a five-year plan on increasing the number of calves every year until we got up to full capacity, which is around 500 calves,” Philip added.

This is the idea which Philip then presented at home to his father Derek and uncle Ian, both of whom were suitably impressed and intrigued by Philip’s plan.

However, as is always the case when making a drastic change, they still had some worries. These were soon dispelled after seeking advice from their local Teagasc advisor, Shane Devaney. Soon after, the trio entered in to their farm partnership and they haven't look back since.

“The first time Shane was here he was actually buying a few bags of Barley from us,” Derek laughed.

After going over Philip’s five-year plan with the team of three farmers, Shane offered advice and encouragement to them going forward, while also advising them on some of the many grant aids available.

Teagasc advisor Shane Devaney remarked: “After that, Philip came in about the single farm payment, young farmer top ups and the national reserve and he needed Teagasc on board.

“The partnership took place this Spring, between the three of them together. I started coming out to them last year on the ground.”

Since Philip’s return home, the family began slowly expanding on their calf to beef enterprise. This year, they are raising in excess of 400 calves, ranging in crossbred stock acquired from dairy herds. They now kill with EuroFarms, with all animals killed at under 24 months if possible.

“This year they are getting up and running,” said Shane Devaney, Teagasc advisor.

“From what I can see and from talking to them they are doing things quite well. But unfortunately, it is hard with the way things are with the factories.”

The support and advice from Teagasc doesn’t end there either, with farmers like Philip encouraged to join their local Longford Grassland discussion group.

Philip added: “We meet up roughly seven or eight times per year. We had the group out here for a walk about two months ago.”

Seán Doorley, Teagasc advisor Roscommon/ Longford, says these groups are now the main method of getting new information out there.

He remarked: “The discussion groups are now the main way to get knowledge out to farmers. You are in a small group, with local people who are sharing their ideas and what they are doing on their farm.

“If farmers see their next door neighbour doing it and it is working for him/her, they have a better chance of taking it on.

“They are also a big thing from a social point of view and farmers getting up and out and about to meet other people. Other than that, they mightn’t be getting out too often.” he continued.

Philip lauded the support provided by Shane and his fellow advisors during the transitional phase on the farm and encouraged more to avail of said services. Because of this support, he can now aim for bigger and better in the future.

Philip said: “You can ask any question or go to them with a problem.

Seán Doorley, Business and Technical advisor with Teagasc , praised the benefits of farmers entering into a partnership.

“Going into a partnership is a good idea in that the older generation might want to slow down but still retain an involvement in the farm, while the younger generation may be looking to get more involved,” he said.

“This is a route for them to get involved, that keeps the older generation involved and helps the younger farmer to get their feet under the table and up and running on the farm.”

Sean informed the Leader of the steps taken by advisors, with those who seek advice in their local Teagasc office, as well as their different options.

“The first thing we look at is to see if it is financially viable and then whether the farmer has the necessary qualifications to get the Young farmer top-up or National reserve grants,” Seán explained.

“People usually have a bit of the basics coming into us, but we do have a business plan template that can help them put a business plan together if they want. Some of them might be looking to go to the bank to get a loan and they need a business plan drawn up for that.

“The business plan shows what repayments they would have to make on a number of things. They can then decide themselves if they will be able to meet those repayments,” he continued.

Concluding, Seán encouraged people to come in for advice at the earliest opportunity.

He said: “We are always trying to get young farmers in.

“We always encourage them to come in as early as they can,” he concluded.