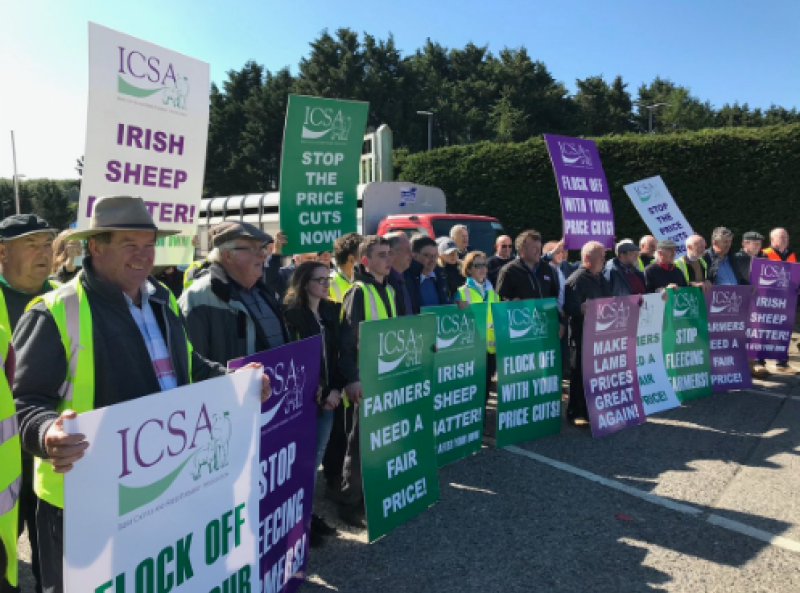 The Irish Cattle and Sheep Farmer’s Association (ICSA) have today, May 20, held a protest against falling sheep prices.

The Sheep committee gathered at Irish Country Meats (ICM), Camolin, Co Wexford, as processors across the board continue to hammer sheep farmers with savage price cuts.

Speaking at the protest, ICSA sheep chair Sean McNamara said, “There is no way sheep farmers can bear these sorts of price cuts and if they continue, most of us will not be able to stay going.

“Our produce has been rendered virtually worthless; we might as well be giving it away for free.”

Mr McNamara confirmed that farmers need to make at least €7 per kg per lamb to break even, with prices now well below €6 per kg.

“It costs a lot of money to rear these lambs and we need to be getting a minimum of €7/kg to make it viable.Right now, prices have gone well below the €6/kg mark, plus we’re getting hammered by weight limits. We’re losing money hand over fist and it’s just not sustainable.” he said.

“Sheep farming is a low income business; how do they expect us to stay going and maintain standards if processors refuse to give us an adequate price? EID was supposed to help, but all that has done is increase costs for us while factories and marts drag their heals on installing the necessary readers. We were also promised that new markets would be delivered but the reality for those on the ground is that new markets only make money for those further along the chain and never filter back to the primary producer.” Sean McNamara added.

The ICSA sheep chair says the anger among sheep farmers is clear for all to see and says they are being treated 'with utter contempt'.

He said, “The anger is palpable amongst the farmers protesting here today. Livelihoods are under threat and to make matters worse, they’re being driven out of business unfairly. We still have any amount of lambs coming in from the north and elsewhere, purely to depress the price here.

“Trade has never been as good in the UK as it is at the moment so there is no valid reason to be turning away Irish lambs in favour of bringing in supplies from elsewhere. We are being treated we utter contempt.”

Mr McNamara concluded by saying, “Sheep farmers are on their knees. We are here to make it very clear that these price cuts have to be reversed for the sector to have any chance of surviving.