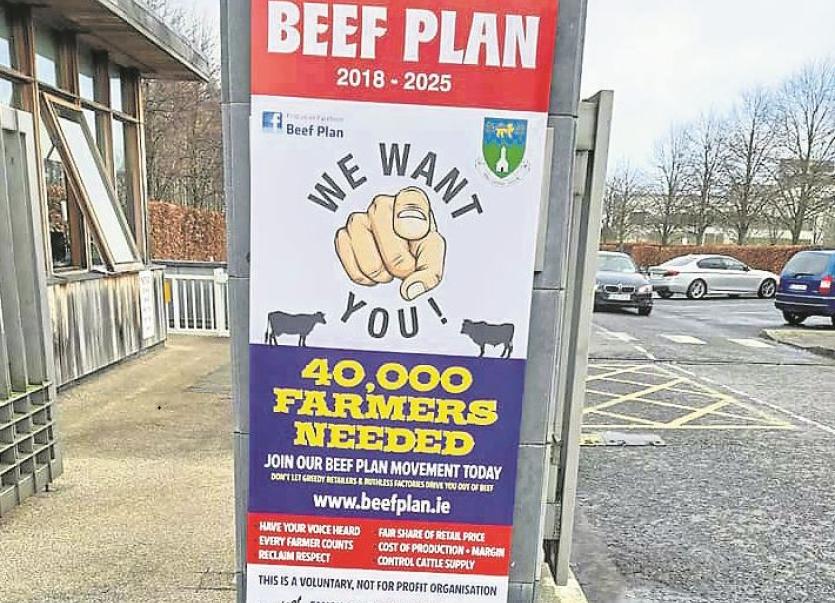 One of the Beef Plan Movement promotional posters

Members of the Beef Plan Movement (BPM) have revealed details of a peaceful protest, which they are due to hold outside the Irish Farmers Journal Beef Summit on Thursday, May 09.

The protest has been organised to highlight the need for better beef prices, with the BPM calling current prices ‘unacceptable’. The team behind the BPM, which now contains in excess of 15,000 member farmers, issued a call to all members to unite for a peaceful rally.

The meeting place for the protest is the Shearwater Hotel, Ballinasloe at 6pm. Key figures in the beef industry such as Minister for Agriculture Food and the Marine Michael Creed TD, Cormac Healy of Meat Industry Ireland and Bord Bia’s Tara McCarthy will be in attendance at the Beef Summit, which is the reasoning behind the choice to protest.

A statement released by Eoin Donnelly of the BPM reads, “With Beef prices still up to 40c/kg less than this week last year, the current prices for beef are not sustainable for farmers .

“Beef Plan Movement is asking Processors and Retailers to collectively increase the farmers share of retail price to prevent the certain demise of the suckler industry.”

The statement continues, “Key beef industry stakeholders have indicated that they will be presenting at the summit including Michael Creed (Minister for Agriculture), Bord Bia and Meat Industry Ireland. Beef Plan Movement intends to use this peaceful rally to highlight the ongoing exploitation of suckler and beef farmers.

“Please support this Beef Plan Movement peaceful rally and show that farmers want this exploitation to be stopped.”