‘There is just no future in beef’, warns Longford farmer 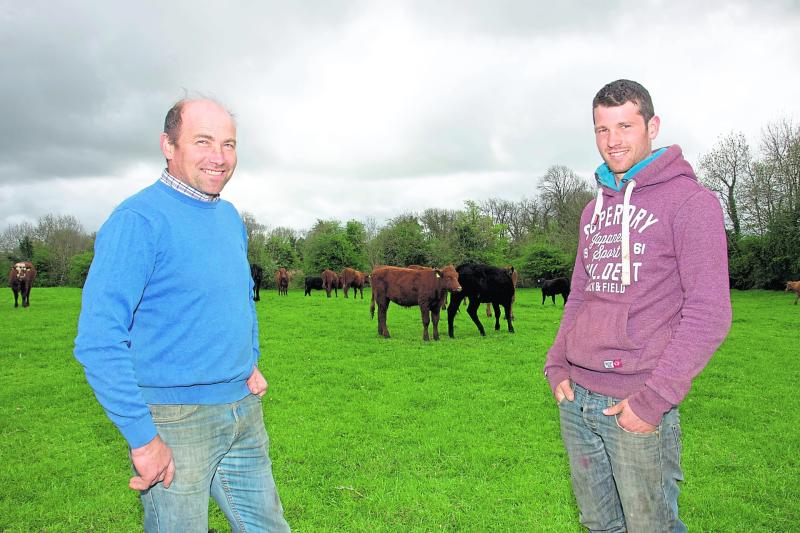 Beef Plan member Norman Mills and his son Tom Mills pictured with some of their suckler stock PICTURE: MICHELLE GHEE

Norman Mills, who runs a flock of sheep and herd of 120 suckler cows alongside his son Tom near Ballymahon in Co Longford, has expressed his concern over the future of the beef industry.

The farmer, who is an active member of the Longford Beef plan movement, has been farming for the majority of his 47 years and simply knows nothing else.

Norman explained, “I have been farming all of my life. We have always run with Suckler cows and sheep.”

This may soon change, however, as with the rapid decline of beef prices Norman says it is no longer feasible to continue with his Suckler system.

“We are being pushed out of the sucklers really.”

“The sheep weren’t too bad last year, but this year the Sucklers aren’t able to carry themselves at all.”

Norman stressed it is not even worth rearing stock any more and says he feels as though he has worked all of his life for nothing, which is one of the main reasons why he joined the Beef Plan.

“I am farming alongside my son Tom. He bought in some dairy stock for the past two years. They are now being sold at a big loss. He bought them as suck calves. At the time it seemed like good value, but as they grew it turned out to be a waste of time.
“We will be looking to cut back on the cows, because there is no real future in it now.” said the farmer.

Norman says with the dramatic downturn in prices in recent months, they can no longer afford to stay as they are.

“We usually sell calves at about one year old, but this year we are having to sell them at big losses.”

Norman said price cuts are having a massive impact on the lives of farmers.

“The losses are huge. The men we would be expecting to buy the calves got badly hit this year. They were hit with the fodder crisis last year, the drought and the wet winter, so they can’t continue either.

“Some men are telling me they are losing up to €500 per head. There is just no future in beef.”

The farmer said the government is to blame.

“They are not securing the markets for beef. It is obvious that someone is not doing their job to get rid of the beef. There is a world shortage in food and it has to come from somewhere, so why not here?”

Another issue, according to Norman, is the lack of support for Irish produce .

“I was in a local chipper the other day and they actually had no Irish produce, it was all Brazilian meat. Even the potatoes were from Poland.”

Norman admits the future of beef looks bleak and says his own future is uncertain.

“At the end of the day, everyone will have to cut back and produce less. Unless there are new markets or beef gets scarce, the prices won’t go up.” he said.

“I am at a crossroads really and I don’t know which way to go. It is very difficult, there seems to be no future.”

He warned that he is not the only one considering abandoning their suckler roots.

“I am on the road a lot and many farmers tell me that as soon as the suckler cow scheme is up, they are getting out. We could see a huge drop in numbers.

To secure a future in the industry for his family, Norman decided to join the Beef Plan group. He said it is simply farmers helping farmers and urged others to join their mission.

Norman, “You would be hoping that if enough people joined the Beef plan, then we would get a better price or markets would improve or something.

“Even if all of the organisations joined up and we did something together to secure further markets, things might run more smoothly.”