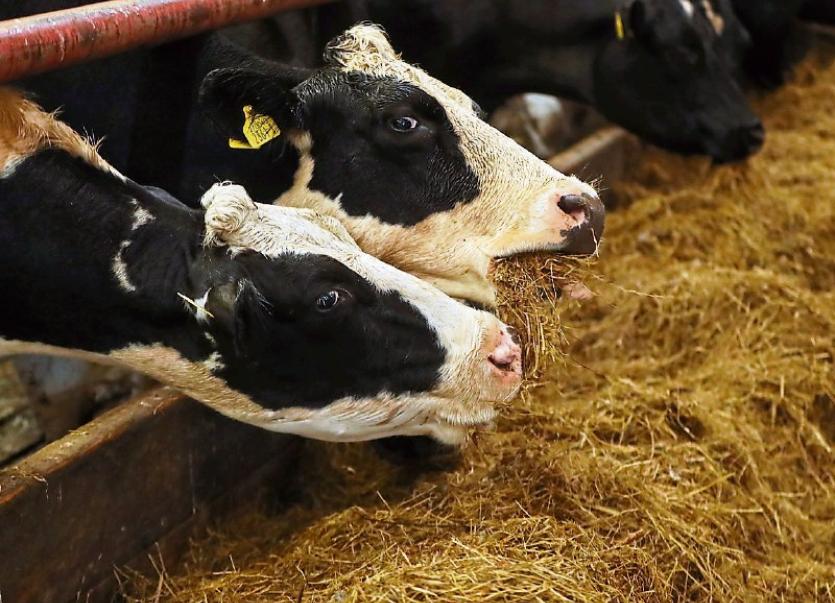 The majority of people will remember 2018 as one of the warmest on record, but for farmers it would probably be considered as more of an ‘annus horribilis’.

The severely cold spring followed by one of the warmest summers on record meant that grass production declined by an average of 3.5 tonnes Dry Matter per hectare, which greatly reduced the quantity of winter forage produced.

Thankfully improved weather conditions in autumn 2018 allowed farmers to somewhat make up the deficit, but the quality or quantity required was never going to be matched.

A fodder survey carried out by Teagasc in October 2018 highlighted that fodder shortages were evident throughout the country, but particularly in the south and east.

Farmers were strongly urged to adhere to strict feeding regimes in order to safeguard the supplies that were available.

Currently, to reflect the situation at this half-way point, Teagasc conducted a fodder survey across the country in January 2019. The survey consisted of data collected from over 360 Teagasc clients representing both dairy and drystock enterprises.

While results from the survey initially seem positive, with 73% of farmers surveyed having enough winter feed to meet livestock requirements, a more concerning outcome is that over 25% of farmers surveyed are currently experiencing a fodder deficit based on the planned turnout date.

In total, the survey revealed that there was 12 % (one in eight) of farms with a winter feed deficit of up to 10%, with the remaining farmers (15% or one in six) reporting a deficit of greater than 10%. A 10% fodder deficit would equate to 2 weeks feeding over a 5 month winter. This highlights in no uncertain terms that the effects of 2018 are still persistent throughout the spring of 2019.

In addition to investigating current fodder supplies on farm, the survey also answered some pertinent questions relating to measures being undertaken to address fodder deficits, the intention to sell surplus silage (of available stocks), planned turn out dates and spring fertiliser application dates.

Initial results suggest that on average there were sufficient stocks of fodder available in stock on farm. Positively, in all provinces of the country there appeared to be sufficient fodder to meet requirements until the planned turnout date.

However, up to 75% of farmers do not plan to sell any surplus silage, so the quantity of surplus silage available for purchase will be limited. On farms where a fodder deficit was identified last autumn, or where there is currently a fodder deficit, the three most popular measures which are being taken to alleviate this include:

feeding straw, or hay to stretch silage supplied (16% of farms)

Bearing in mind that 25% of farmers are currently experiencing a fodder deficit and that weather patterns over the next ten weeks are unpredictable, it is vitally important to remain cautious, continually check fodder supplies and to implement a feeding regime for all animals present on the farm.

PastureBase Ireland, the Teagasc grassland measurement database, has shown that high levels of winter growth has resulted in farms with average grass covers of 950 kg DM per hectare.

The extra grass on farms will help reduce the requirement for fodder on farms, but only if it is grazed and utilised carefully. It is essential that the Teagasc spring rotation planner is used to ensure adequate regrowth for the second rotation.

The following are four steps including key management practices, which will help you address any fodder deficit which you may have:

Let priority stock out to graze when conditions allow at the earliest opportunity. Given the mild weather experienced over the winter, there are large quantities of grass on farms.

Apply fertiliser to increase grass production. Target drier fields with a high proportion of ryegrass to ensure the best response. Slurry can be applied to fields with a low cover of grass. A half bag of urea per acre is the most cost effective way of applying some early nitrogen.

Check silage stocks regularly. Where a shortage is identified, be sure to plan out how much feed will need to be purchased and source it in time to avoid panic buying.

Ensure finance is available to purchase additional feed. Where cash flow is an issue, selling some non-priority stock will help by reducing feed demand and improving cash flow.