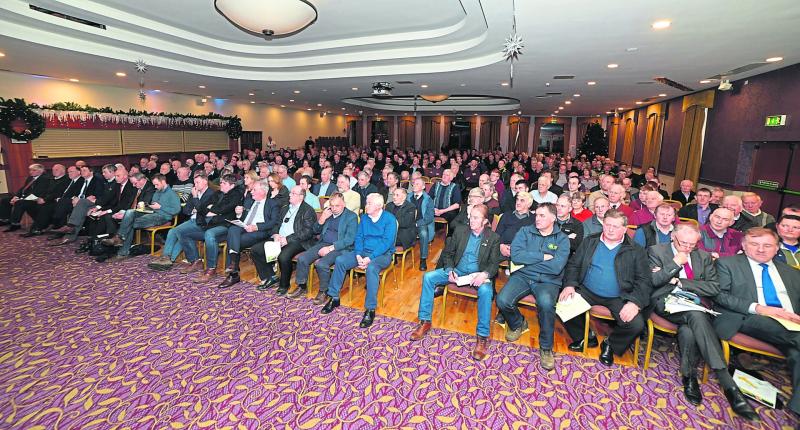 The attendance of over five hundred farmers, at the IFA Western Region meeting on the Fodder Crisis in the Mc William Park Hotel Claremorris last Friday. Photo: Frank Dolan.

IFA has said this week that a proactive approach is need to prevent flooding in the future.

“Severe flooding in recent years highlights the need to take a proactive approach and initiate works to protect against future events,” the organisation’s President Joe Healy said during the recent National Flood Forum in Athlone.

Mr Healy also expressed concern that the draft CFRAMS, has to date, addressed the protection of large towns and some villages while ignoring farmers, rural areas and farmland.

“Flood events on the River Shannon used to be a once in 100 year occurrence and the fact that two such events have occurred in the last seven years must spur action and lead to the implementation of major works that will either alleviate or mitigate flooding on the Shannon and in other vulnerable areas around the country,” he continued, before pointing to the works that were already under consideration.

“It is positive to see works now taking place at pinch points on the River Shannon, which has not been maintained for almost 100 years.

“The recent commencement of works is welcome but needs to be accelerated.

“A single independent authority should be established to deal with the issues on the river including impediments such as alluvial islands and silting.

These obstructions to the flow of water on the river and from channels to the river must be removed.”
Recent Budgets have included an increased allocation for capital works but, Mr Healy warned over concerns that funding would not be spent given the slow process of proposals, project planning and implementation.

“With increased recurrence of flooding,” he concluded, “it is vital that the Government is proactive now; the protection of livelihoods and property are paramount.”