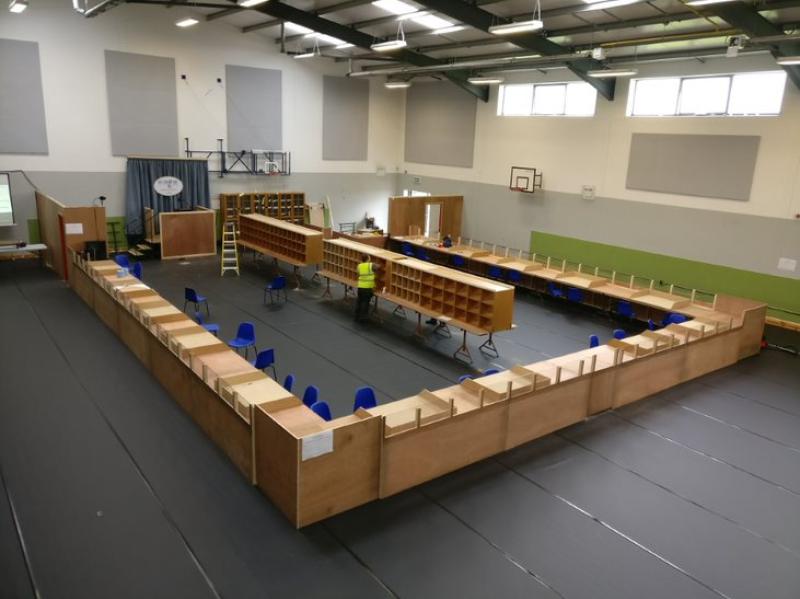 The Edgeworthstown count centre (picture via Longford County Council @longfordcoco). Longford local election votes will be tallied in Westmeath before returning to Edgeworthstown for official count

The segregation of votes following yesterday’s elections and referendum involves a major logistical operation and it will see the ballot boxes from the 75 polling stations across county Longford make their way to the AIT International Arena in Westmeath.

The 39 candidates seeking election in three Longford municipal districts and their tally teams will be at the Athlone Institute of Technology venue from before 9am on Saturday morning (May 26) as the ballot boxes are opened and the three different voting papers inside are separated.

As count staff separate the votes, tally teams will begin their work and by around lunchtime on Saturday, a Longford tally will hopefully be available.

The Longford local election ballot papers will then be transported to the count centre at St Mary’s campus in Edgeworthstown with the official counting of votes, under the watchful eye of Returning Officer Nora O’Farrell and her staff, scheduled to get underway late that afternoon.

During the last local election count in 2014 at Newtownforbes, it was almost 11pm on the Saturday night before a First Count result for Longford Municipal District was officially declared and the counting of votes for the three municipal districts didn’t conclude until the following Monday evening. So be prepared for another lengthy count process.

You can keep up to date with all the Longford election news as it happens throughout the weekend on our Longford Leader: Elections 2019 Live blog

“The segregation of ballot papers and the verification of ballot paper accounts of the Local and European Parliament elections and the Referendum (on the Dissolution of Marriage) for Counties Longford and Westmeath will take place at the AIT International Arena, Athlone, Dublin road, Co Westmeath on Saturday, May 25 commencing at 9am.

“Once the Longford Local election ballot papers have been verified they will be transferred to the Local Count Centre at St Mary's Community Centre, Edgeworthstown, Co Longford.

“Once the Westmeath Local election ballot papers have been verified they will be transferred to the Local Count Centre at Moate Community Hall, Moate, Co Westmeath.

“The Count of the Referendum for both counties Longford and Westmeath will be conducted in the AIT International Arena.”

Fintan J Murphy, Constituency Returning Officer, Midlands North West constituency explained that once votes are segregated that ‘the European votes from each of the counties will be brought by army personnel to the TF Royal theatre in Castlebar on Saturday evening. The Euro Count will then begin on Sunday morning at 9am.”

Also read: Independents set to be the power brokers once again in Longford county council chamber

The count venue at St Mary's Community Centre in Edgeworthstown is now ready with full equipment and support supplied by Longford County Council's IT Section. The count starts on Saturday for the 39 candidates across the 18 available seats. #Longford #LocalElections19 #LE19 pic.twitter.com/bwjqhdlcGT