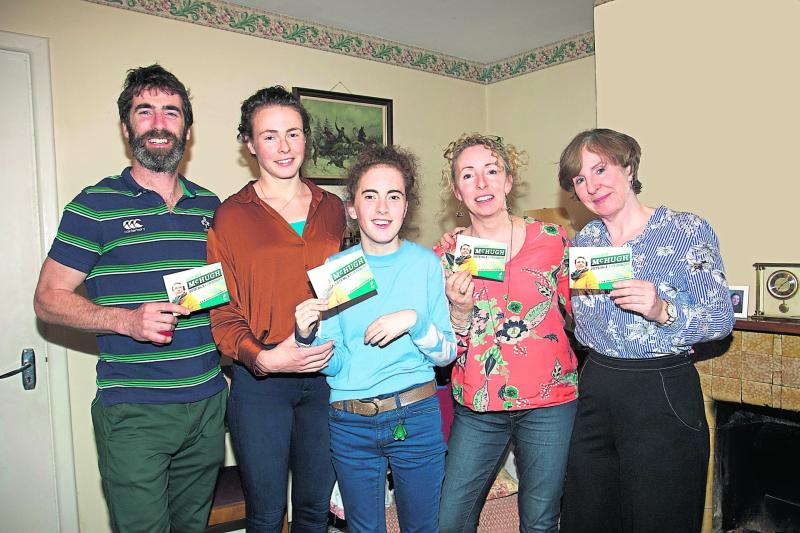 Saoirse McHugh, Green party candidate for the European elections on May 24, received a warm welcome to Kearney's of Moydow last Friday, the birthplace of her grandmother Mary Kearney, now Morrisson.

A large crowd of Mary's friends and relatives gathered to wish Saoirse, a first time candidate, their support in the upcoming European elections.

“We spent plenty of summers days knocking around Moydow and I never thought I'd be back here canvassing for a European election,” Saoirse told the Longford Leader.

“I have an enormous constituency to cover so it's great to have a little pocket of support here in Longford. I think I might even have converted some of them to environmentalists.”

Mary, who was joined by her sister Kathleen and brother Sean at their former home, expressed her pride in her granddaughter.

“She's smart and she's brave. It's a big undertaking but she believes in what she's doing and she knows we can do better.

“We're all very proud of her and it's given us a nice reason to get everyone together in Moydow to wish her well.”
Party lines were even ignored as Cllr Colm Murray arrived to offer support to Saoirse.

At 28, Saoirse is the youngest candidate in the race and her home in Achill island is the most westerly point in the constituency.

“There's also the challenge of being with a smaller party, less coverage, less posters, but you just have to get stuck into it and talk to people.

“We hear about this so called economic growth but I don't see it in Achill or Moydow, we're being neglected.

“Agriculture is what I'm most interested in and I believe farming can be where we change our societies for the better, socially, economically and environmentally.

“I had a great chat with PJ McDermott and, like a lot of farmers, he's ready for a change. I want to be that change, I want to keep people on the land for a fair living and I want places like Moydow to not just survive, but to thrive.”