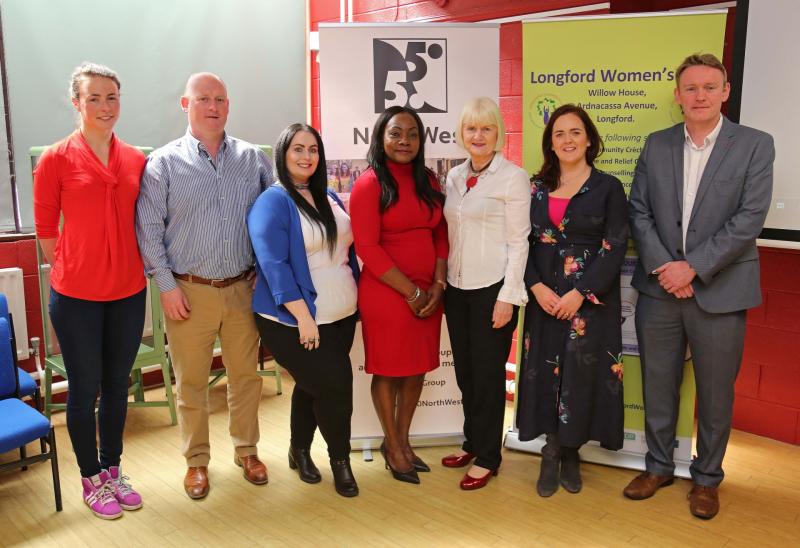 Outgoing MEP Marian Harkin was in attendance at the recent SHE (See Her Elected) project launch by Longford Women's Link (LWL) and 50/50 Northwest in the Longford County Library.

Harkin was present as a keynote speaker and first praised the work done to date by both 50/50 Northwest and the LWL, before noting the importance of having gender balance in politics and a balance between the number urban and rural candidates.

“I have always said and I still say, do women make better politicians - no - but we need to see the balance and that what it is all about.

Harkin said of the SHE project, “I am delighted with the Manifesto and the work you have done in encouraging women. It is about the hands-on work of bringing women together, mentoring them and helping them to see that they have the potential and guiding them along that pathway.

“I am therefore absolutely delighted to launch SHE, see her elected, three weeks out from the election.”

In attendance at the launch were numerous candidate hopefuls, both in the European and local elections. Harkin MEP took the opportunity to issue some insider tips and tricks to the canvass trail and a life in politics.

The first point from Harkin MEP focused on the issue of self confidence and she stressed the importance in believing in yourself, before trying to get others to.

“How do you get someone to believe in themselves, because that is the first thing you have to do. Believe in yourself, what your message is and in what you are trying to achieve, because nobody else will unless you do yourself first.” she urged.

“There has to be a way or mechanism to translate that into people you are talking to."

Another word of advice from the outgoing MEP was to never give up, pointing to her own failure to be elected at the first time of asking.

“I know what it is to run and to not get elected and to come back and to manage it the next time. Sometimes people have to try more than once and I think that is an important point as well.

Focusing on the canvass trail, Harkin stressed the importance of both politician and their canvassers being well versed in their message.

Harkin, "What do you stand for, people need to know that, and secondly, why would people vote for you, you have to be able to answer. Not only you, but your canvassers also need to know the answer to that question.

"That was something I learned in the first and second elections. Sometimes your messages have to be very simple and very clear, because you don’t have long on a doorstep to give people an indication of what you stand for or who you are.”

Harkin MEP urged all candidates to have a focused overall vision.

“You don’t need to know everything, as some of it will only come with experience and time. It is fine to have a vision, but unless people understand that you know there is a way from A to B, they are going to say that is grand,” she added.

Harkin then warned candidates against keeping their focus too narrow.

“Be careful that your focus isn’t too narrow. Your issue may be really important to you and to others, but every door you knock on, people when you speak to them will have different issues.”

“All you can ever promise is to do your best, to work hard and to tell people wherever you want to go.”

Marian then issued some further words of advice to candidate hopefuls, noting how valuable personal contact is, while also encouraging candidates to play up to their own strengths.

“What are your own personal strengths. Play them up, because nobody else can do that for you. You got to do that yourself.” she said.

“You need, if you can at all, a director of elections. In my case, it was my brother. Somebody who can manage as best they can what it happening, to help take some of the pressure off you. Because your job is to meet people, to talk to people and to get the message out.”

She said of asking for votes, “Ask for the vote. It might not be a number one, it might be a number two or three, but let me tell you, when I was waiting in the last count in the last European elections, sevens and eights elected me,”

“Don’t ever consider just because you don’t get number one that it is not good enough. Ask for the vote and if number of one is gone, ask for the highest possible preference after that. You never know, like me, you might be delighted to see a seven beside your name."