General election 2020: The big issues on the doorsteps 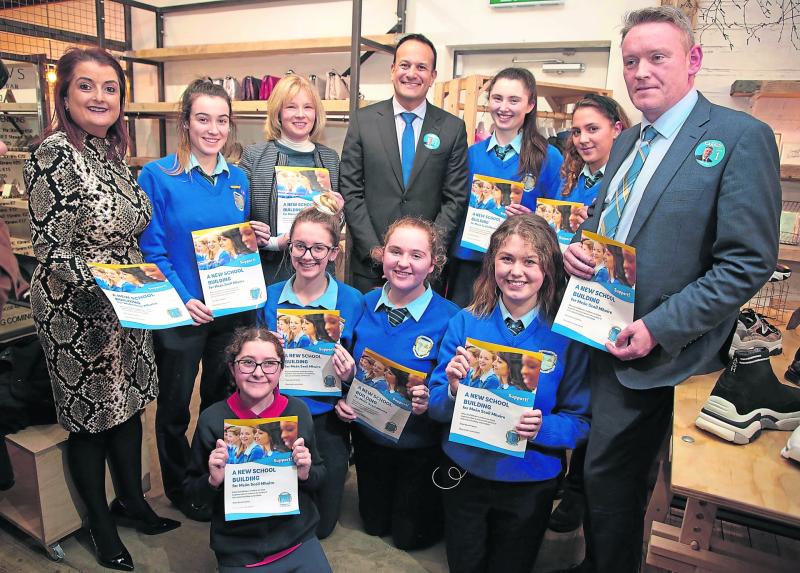 Teachers and students of Meán Scoil Mhuire, Longford town highlighted their campaign for a new school building to An Taoiseach Leo Varadkar when he visited Fabiani last Thursday evening

With Week 1 of the general election campaign over, the major themes of the election are already emerging as the battlelines between candidates are drawn.

As it is a short campaign, this election is mostly fought across the airwaves and online. That means issues such as health, housing and homelessness are addressed on a national level and often the local nuances at constituency level get lost in the campaign noise.

The housing market in Longford has been described as entirely dysfunctional. At the time of writing, there are just three houses for rent in Longford town on Daft.ie. The lack of good quality, affordable housing to buy is a major stumbling block for young families who want to get on the property ladder or move up a rung or two. Rural homelessness is a hidden problem with many people couch-surfing or staying with family while they try and find suitable accommodation.

Health certainly is an issue in Longford and there would be widespread support for the retention of a 24 hour A&E in Midlands Hospital Mullingar. The HSE waiting lists and access to GP care are both issues being raised on the doorsteps. There have been increases in the number of people waiting for homecare locally despite additional funding for services last year.

Crime and anti-social behaviour have jumped up the list of priorities on a national level but this has been an ongoing problem in Longford thanks to ongoing feuding which spilled out into a mass brawl in Longford town just last month. The drugs problem has now infiltrated every single village and parish in the county and a constant complaint is that the names of these dealers are well-known locally but not enough is being done to tackle them. Longford did get five extra Gardai earlier this year which will help alleviate some of the pressure on local Garda resources.

SEE HERE: For extensive coverage of the general election 2020

Rural development and the regeneration of Longford town, for which €3m was allocated last year, will be crucial for local businesses. There has been progress in many parts of the county - Granard has benefitted from the development of the Norman Heritage Centre while a Digital Hub is planned for Edgeworthstown as well as the €3m library development. The arrival of Center Parcs in Ballymahon has had a significant knock-on effect in the locality but the Midlands remains the Cinderella of the tourism sector.

The local economy is built on small businesses and business owners talk of the struggle to pay insurance, rates and wages while keeping a business going. Many of the farmers who took part in the recent protests in Dublin hailed from Longford and Roscommon and this sector will need support to stay sustainable while impending CAP reform is also an issue for the agri sector.

Access to affordable childcare and fair wages for employees in the sector is also getting a mention locally but as usual, this issue is not getting the limelight it deserves. Mean Scoil Mhuire in Longford met with Leo Vardakar last week during his visit to Longford to discuss their plans for a new school.

The pension age issue, where people who retire at 65 do not get their pension until they are 66 and must go on Jobseekers Allowance in the meantime, has rightly become an issue in this election as many people think it is totally unfair. Watch as parties clamour to ensure that this does not become the game-changing issue of GE2020.