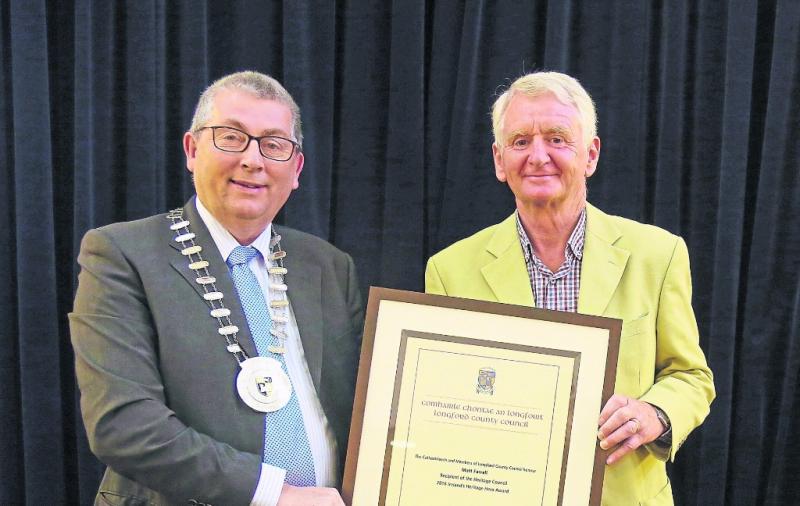 Edgeworthstown’s Matt Farrell was honoured at a Civic Reception in Arás an Chontae last Thursday night.

The Longford man was named as Ireland’s Heritage Hero a couple of months back and his extensive work on the Edgeworth family has led to a series of literary trails and historic buildings becoming available to the public over the past few years.

“This recognition tonight is mainly on the back of Edgeworthstown heritage,” he added.

“Edgeworthstown has a proud literary and cultural heritage and the Edgeworth name is recognised worldwide.”

Mr Farrell went on to say that the town had now established the Edgeworthstown Heritage Trail and it was a great feeling when people from all over the world descended on the mid-Longford town to enjoy all that was on offer there.

“Recently we had a group from Australia who were on a three week literary tour of Ireland,” he said.

“The leader of the group, who has travelled all over the world - Suzanne Fullerton - told us that the visit to Edgeworthstown was the highlight of the group’s trip.

“It was wonderful to hear that and it is the feedback from visitors that keeps us going.”

Meanwhile, Mr Farrell is well-known as a staunch community organiser in Edgeworthstown.

He has been involved with the Edgeworthstown Development Association for a long number of years and is a stalwart of the Edgeworth Literary Festival which now attracts a global audience.

The Edgeworth Family is itself steeped in history and includes writers, scientists, inventors, astronomers and economists among its members!

Paying tribute to Mr Farrell before bestowing him with his civic honour last Thursday night at Arás an Chontae, Cathaoirleach, Cllr Mick Cahill said that Edgeworthstown’s heritage and cultural success was testament to the hard work and dedication of Matt Farrell.

“In 2015, Edgeworthstown Development Association won First Prize in the special category at the National Pride of Place Awards,” he added.

“This was due in no small part to you, Matt.

“Judges were particularly impressed by Matt’s natural warmth and the genuine love that he has for Edgeworthstown, it’s history and it’s people.”

The Cathaoirleach went on to say that Mr Farrell was “a great example” of what community activism was all about here in Co Longford.

“You prove,” concluded Cllr Cahill, “what can be achieved through dedication and collaboration.

“You are a wonderful ambassador for our our county.”