Marquee in Drumlish: Ten years of Monster bingo and over €30,000 raised for charity 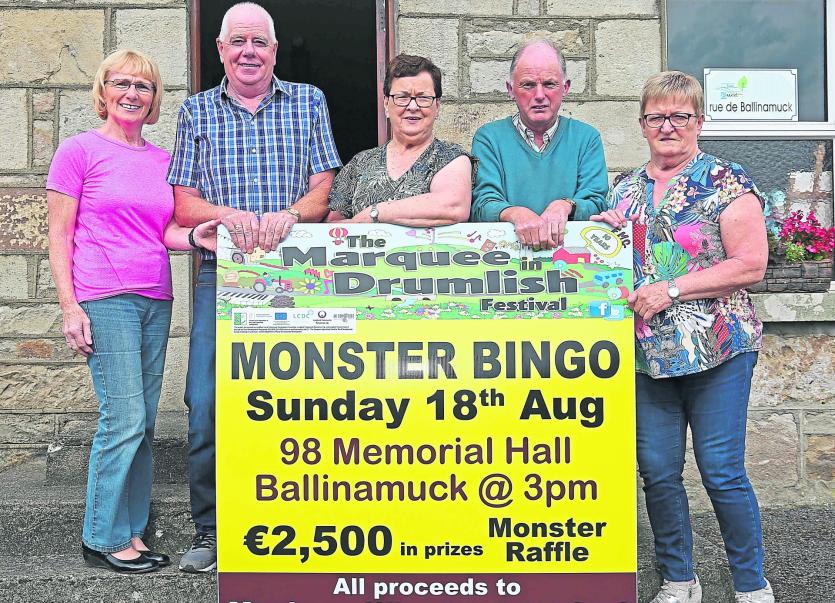 Although the musical acts performing at the Marquee this weekend may be set to, excuse the pun, take centre stage, another event has consistently drawn the crowds over the past ten years - Monster bingo.

Coinciding with the first year Fr Manning Gaels began hosting the Drumlish Marquee, a team of five locals came together with the hopes of helping those most in need. The team of five on the committee, who were all involved in the planning of the maiden event, includes: Betty Creegan, Brendan Corrigan, Bridie Reilly, Patsy Higgins and Adrian Lennon.

They began their first fundraising venture, Monster Bingo, in 2009 and have run it every year since. In fact, it was the Somalia famine appeal which kicked these bingo lovers into gear and commenced their ten-year fundraising drive for charity.

Committee member, Bridie Reilly, told the Leader: “It was Brendan who first suggested we do it.

“The Somalia famine appeal was the big thing initially.

“Fr Manning Gaels, in conjunction with the marquee, allowed us to run the bingo for whatever charity we wanted to,” Bridie added.

After raising over €2,500 in their first year, a feat they have continued to do year on year, the team of five have now raised in excess of €30,000 for charity.

All proceeds have been donated to various different local initiatives and charities through the years.

One of the committee’s recent fundraising bingo events was held in aid of SADS and in memory of a local footballing enthusiast who tragically passed away from the illness. Following that particular fundraiser and with this in mind, the team of five organised cardiac screening for each member of Fr Manning Gael's football teams.

This year’s chosen benefactor holds some significance locally, as the team are to donate all proceeds to Meals on Wheels Longford, a local service which grants older generations the opportunity to continue living at home through the regular provision of healthy meals and social interaction.
“It’s a great cause and it’s local,” Bridie Reilly stated.

This year’s event, which takes place on Sunday, August 18 in the 98 Memorial Hall in Ballinamuck, kicks off from 3pm on the day and it is not only bingo that people can look forward to. As always, the team will also host what is described as a monster raffle with an impressive €2,500 worth of prizes up for grabs, all donated by local businesses. The raffle will take place before the last bingo book of the afternoon, at round 10.

Bridie Reillynoted: “All the prizes for the raffle are generally donated.

“We usually get about twenty raffle prizes from local businesses.”

Betty Creegan adds: “It means whatever we make on the bingo goes straight to the cause. We don’t have to take expenses out of it.

“Also, Whatever we make on the bingo, Fr Manning Gaels round it off.”

Raffle tickets will be sold throughout the day, during the bingo itself and at the half-time interval.

The event has been described as an outlet for the non-festival goers, young and old, with everyone encouraged to attend and show their support.

“The locals really support us too.”

For those who cannot attend but would like to help out with this charitable venture, committee members will also be accepting donations.

Betty said: “People can even come and just donate either if they want to,”

The team behind the Monster Bingo event are helped on the day by many volunteers, who they wished to thank for their continued support. This includes those selling tickets, acting as stewards facilitating parking, those helping in the shop and everyone else who helps out on the day insome way.

Brendan remarked: “There is a good number of people involved altogether. I’d say it is around 17-20 people.”

Betty continued: “It is just five of us involved in organising it, but plenty more come along and help out on the day.

“We would like to thank all of our helpers from all over the years and the 98 hall, for allowing us to use the hall free of charge. We are very grateful,” she concluded.