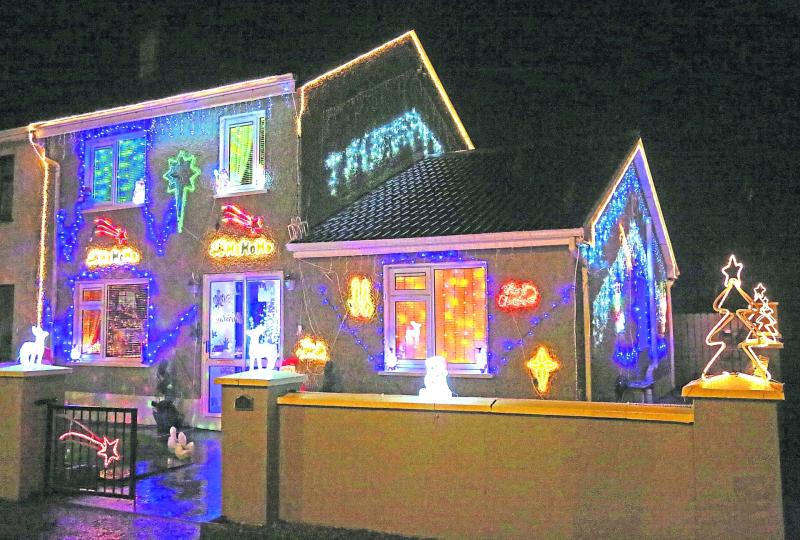 It's looking a lot like Christmas at the Ballymahon home of local chimney cleaner, Dessie Gray, who has his house spectacularly lit for the festive season. Photo: Shelley Corcoran

There’s nothing quite like driving through the countryside in the evenings and seeing the houses all lit up in preparation for the arrival of a certain bearded man in red on December 24.

And, one house the big man certainly wouldn’t have missed this Christmas Eve is the house of chimney-cleaner Dessie Gray in Ballymahon.

Dessie and his family have been turning their home into a Winter Wonderland every Christmas for many, many years, lighting up the house and ensuring Santa and his reindeer would be able to see it from if they decided to fly that high.

The very idea that it could be seen from space was one that made Dessie chuckle before explaining the decorating process to the Longford Leader.

“We started putting lights up at the beginning of November, and then we did a little bit for a few hours every evening until it was finished,” Dessie told the Longford Leader last week, noting that it took quite some time to get it just right.

The whole house - inside and out are donned with strings of lights; the garden features Christmas figurines of Santa Claus, and various other Christmas scenes; and the walls feature lit up reindeer, , Christmas trees - you name it, it's there.

And, with so much effort put into the decorating of the terraced home, it’s no wonder it’s the most lit up house in Ballymahon - if not the whole of Longford - this year, drawing attention to itself from all over the south Longford town and surrounding areas.
“It’s nice enough this year. There’s probably not as much on it as previous years because things are very busy with work at this time of year,” Dessie explained.

Dessie has a very important and very special job at Christmas time.

He spends the weeks in the run-up to the big night going around Longford, ensuring chimneys are clean and ready for Santa’s arrival.

He certainly brings excitement to family homes when he starts to clean soot out of chimneys, giving children all over Longford the confidence that Santa will manage to slide down their chimneys with his bag of presents - and no soot on his suit.

And, while Dessie's house is certainly one of the most Christmassy homes in the county, we'd hate to be the ones taking all those lights off!

Merry Christmas to all from the Longford Leader