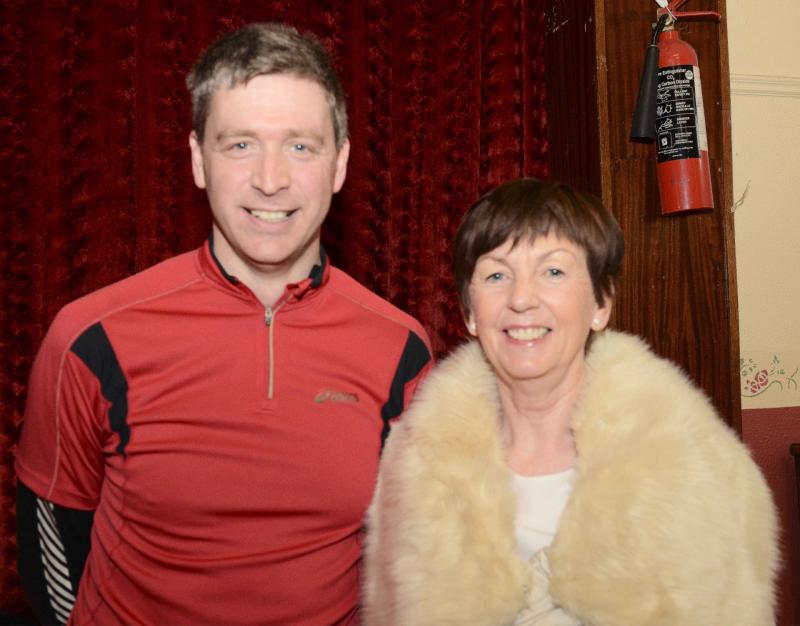 On Christmas Day the annual Christmas Run for Multiple Sclerosis (MS) takes place from the south Longford village of Newtowncashel to the shannonside town of Lanesboro.

Now in its 27th year the event has gone from strength to strength since its inception back in 1990.

The brains behind the operation was Ger Flood who has been living in Melbourne, Australia for the past 17 years.

Initially it began as a fun run but shortly thereafter organisers discovered that John Joe Whitlow from the parish had been diagnosed with MS and they decided to do the run and raise funds for him.

When Ger left these shores, his brother Michael took over at the helm.

Now the run has raised close to €150,000 since its inception with all proceeds going to the Multiple Sclerosis Ireland Longford Branch.

MS is a disease of the brain and spinal cord where the central nervous system acts like a switchboard sending electrical messages along the nerves to various parts of the body.

These electrical messages instruct the body to perform various tasks, such as movement or thought.

Most healthy fibres are insulated by myelin, a fatty substance which aids the flow of messages but in the case of MS, the myelin breaks down or becomes scarred.

This distorts or even blocks the flow of messages, resulting in the many symptoms of MS.

The unpredictable nature of the condition can sometimes make it hard to manage. However, over time, many people begin to notice patterns and triggers to their symptoms, and with appropriate treatment and intervention, numerous symptoms can be managed quite successfully.

Meanwhile, speaking to the Leader this week, Michael Flood said that all hands were now on deck for this year’s run.

“This event has grown from strength to strength in recent years and, with costs kept to a minimum and covered by local sponsors, every cent raised goes to the charity,” he added, before pointing to the fact that on the day walkers would begin from the Hill in Newtowncashel at 11.45am while runners would start at 12.15pm.

The run is 11 km in total and Michael says that everyone is welcome to come along and join in the fun.

“The Run has become a tradition in our family as well as in Newtowncashel now,” smiled Michael who resides in Galway but will be returning home for the festive season.

“I don’t think Christmas would be same for us now if we didn’t have the Run to look forward to.”

And with regards to MS, while some of the symptoms are immediately obvious, reduced mobility is often the most visually apparent.

Other symptoms such as fatigue, changes in sensation, memory and concentration problems are often ‘hidden’ symptoms and can be difficult to explain to others.

For Michael though, it is the community effort that shines through most on the day of the Run.

“More and more people are coming to the Run now - everyone comes together, has a laugh and a chat and together they are raising money for a very worthwhile cause,” he continued.

“There is a slightly more competitive edge these days but there are a lot of people out running and cycling now, so people are participating more and more in runs like this.

On the day too, t-shirts are sponsored by Peter Hanley Motors and members of the community provide the refreshments at the end.

“This means that every cent raised goes towards the MS Society and this is something that we are particularly happy about,” Michael said, before adding that 156 people participated in the event last year.

“11km is the length of the run, so it is a big commitment to do it; it’s growing every year and I have even seen years where the weather is bad and people still come out for the MS Christmas Run in Newtowncashel.

“There is a great sense of achievement afterwards and people have a cup of tea and a chat - it’s a very worthwhile thing to do on Christmas Day.”

Managing MS is not just about drug treatments, and many people find a healthy lifestyle also helps.

A balanced diet, appropriate exercise and keeping stress at a minimum can give both the body and mind a good chance to deal with symptoms and some people find complementary therapies helpful.

Many of these therapies promote wellbeing holistically; the focus being on the person and not just the symptoms.

Meanwhile, for this year’s Run, refreshments will be available afterwards in the Hall in Lanesboro.
For more details, contact Michael Flood on (086) 0880855.