Mattie Fox: We no longer live in a world full of surprises and it's a pity 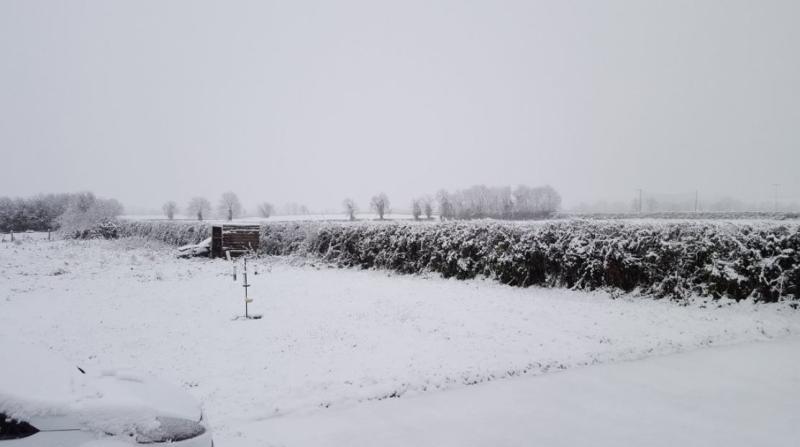 Modern day weather forecasters aren’t often very far wrong. In many ways it’s a pity.....no more surprise at sudden snow covering the ground - although even this morning it was surprising the extent o

This morning, Saturday, December 9, 2017 is the first morning of the year that wakens with a strange calm.

Not a breeze moves the leaves or branches on the holly or palm trees.
Dead silence fills the air.

Nothing disturbs, not even a mouse.....

The birds have become part of the atmospheric silence, flitting quietly from bush to bush searching for a scrap of food. No chirping.

The bird tray in the garden hasn’t a single robin or finch to be seen.

It’s the ninth day of December, and it’s intriguing how the atmosphere at this time of year always delivers one real ‘December’ day; at least it seems that way to me; maybe it’s not nearly so dramatic.
But every year I note at least one day which starts like this. Totally, absolutely calm.

Maybe it’s the proverbial calm before the forecasters storm that’s been flagged all week as a red storm alert. Judging by the recent statistics, that means that there really is a serious storm coming.

The advance of science in the area of weather and other such phenomena, is startling in its accuracy.

The forecast has been very precise, to the day and hour almost, for some time now. We no longer live in a world full of surprises. Nothing sprung on us anymore.
In many ways it’s a pity.....no more surprise at sudden snow covering the ground - although even this morning it was surprising the extent of the covering blanket, that concealed the grass and for a while the roads too, before the traffic put paid to that novelty.

It looks like today won’t ever stop freezing and that the snow will remain in situ without any thaw. The air suggests that will happen.

I’ll take a break from writing until I see how the day evolves.........
I’ve thrown out bread, and cleaned the bird table, and scattered the bread as far as I can throw it, spread widely around one half of the lawn.
The bird table has lots of fresh seeds on it now, and I go back in and get a coffee.

It takes a little longer than usual, but eventually the crows appear to start the busy scrambling for bread.

It’s now 10am.
No birds yet appeared on the bird table but the crows are energetically hurrying here and yonder searching and getting bits of bread.

Now and again a male fluffs himself up and raises his head throws out his chest - the classic male sign of aggression.....you’d occasionally see it at a match, or even occasionally in one of the bars, though the poser would be hoping for someone to hold him back....

Not so the crow. He makes a quick dash and scares one of the flock aside.
In the crow's case, aggression is real and brief.

He settles down to gather a good mouthful of bread - a selfish member of the clan ....again not unlike some humans we know - and when he’s taken as much as possible on board he lifts from the ground. Dropping several lumps of bread to the ground, which are quickly gathered up by some of those he pushed aside, in the first place. The task of the selfish one is never easy!

I walk up through the village of Ballinalee. It’s quite attractive in the early morning, not many shoppers around, but shops looking nice with festive bunting and decorations in the windows.

Santa’s everywhere.....
“Frosty the Snowman, was a jolly happy soul,
With a corn cob pipe and a button nose,
And two eyes made of coal.
Frosty the Snowman, is a fairytale, they say.
He was made of snow, but children know,
He came to life one day.
There must have been some magic in that old silk hat they found
For when they placed it on his head,
He began to dance around!
Oh Frosty, the Snowman, was alive as he could be;
and the children say he could laugh and play,
Just the same as you and me”