Christmas through the years: Spirit and decency of Longford people will never waver 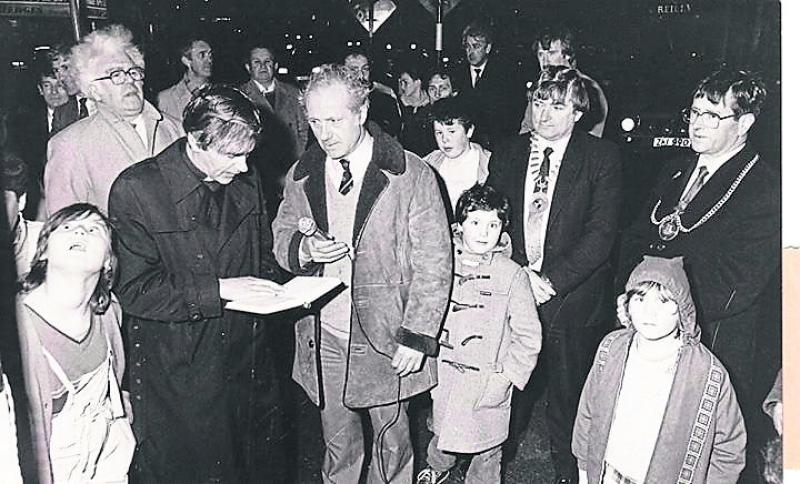 The switching on of the Christmas lights in Longford in the early 80s.

There’s something about the hustle and bustle of Christmas in Longford. The busy shops, the warm and cosy pubs and restaurants, the Cathedral, perched beautifully between the street lights, gazing over the town. But the intimate and festive atmosphere is a far cry from the sombre Christmases some of our locals experienced in the town some years ago. When the multitude of Christmas lights didn’t shine in every window, the mood in Longford was drab and dreary, completely unrecognisable today.

“Going to Mass on Christmas morning and on returning home, finding our very modest Christmas present from Santa Claus was one of the highlights of Christmas Day,” said Sean. “It was a time when people had to make their own enjoyment and people appreciated what they had.”

It was the St Stephen’s Day celebrations that Rosa longed for as a teenager. She attended the local dance with her friends where there was a small band. Sean followed the Wren on St Stephen’s Day to collect enough pennies to go to the matinee in the evening time and if he had enough left over he would play a game of cards after.

But it wasn’t always a time of celebration and festivities. The Emergency took place in Ireland in the 1930s and 1940s and it was felt all around the country especially in Longford.

“The general atmosphere was so drab and dreary that you could practically feel the negativity and sense of hopelessness that people felt in not being able to achieve what they desired,” said Sean.

The physical appearance of the town was contrary to the Longford we know today. There were few cars to be seen, electricity was at a minimum and it wasn’t installed in most homes, it lacked character. “Shops were dull and uninviting; there were no big, well-lit and decorated stores with crowds of people rushing around with loaded parcels,” said Sean.

Christmas has always been a time of celebrating with friends, family and neighbours and visiting people was an important part of the twelve days of Christmas for Mary. Families went from house to house to extend their season’s greetings. “It was a time to pause and meet people because once the spring came in, once the days got longer, people got busy, farming activities started, it was a lull between one season and another”. Mary fondly recalled how nice it was to meet and connect with family and extended family over the Christmas period, something we still hold close to our hearts today.

One of the biggest changes the town has seen over the years is the religious celebrations at Christmas time. “It was then a celebration of the birth of Christ, but I’d say very few people look on it as such today,” said Sean. “At the time, Christmas was a holy day but today, many see it as a commercial holiday. I suppose we are now so much better off financially that we can find easier and more satisfying ways of celebrating and enjoying ourselves.”

The changes in Mass were also very noticeable. Today, Mass is a much more modest and simple affair. However, it was once an elaborate event. “There was a big procession into the sanctuary, where the priests took their seats, wearing their surplices”. Mary then spoke about how the bishop sat on a throne wearing a mitre and how there three celebrants for the mass and how it was all said in Latin. Today, Mass isn’t as however. Mary believes its much more uplifting as there is a heavier emphasis on music and hymns.

Despite all the changes over the years, there are still some traditions that echo the past. Mary spoke about the irony in people complaining that Christmas is starting earlier and earlier every year. Years ago, women fed turkeys and geese in August and people killed pigs at a certain time, all in preparation for Christmas dinner. “Christmas has changed superficially but in reality, it hasn’t changed at all,” said Mary.

Change is inevitable and it is a natural part of life, but it’s important to remember how things used to be. Longford will continue to change but the good spirit and decency of the people will always stay the same.