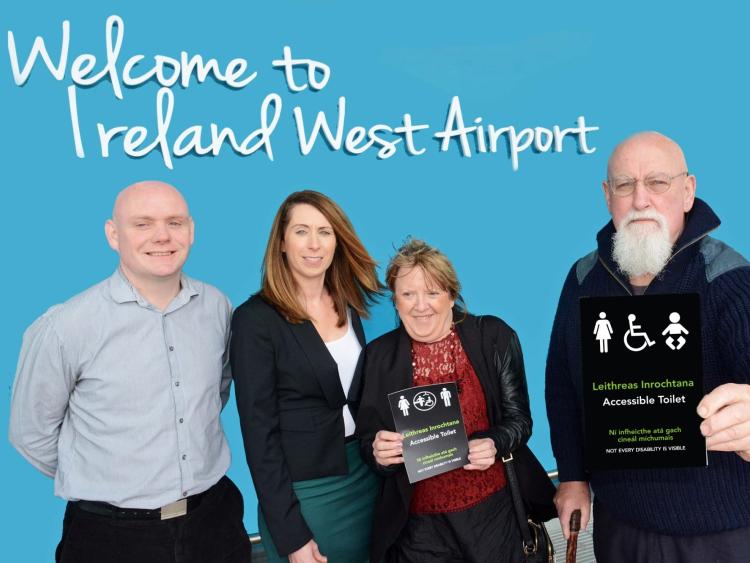 Ireland West Airport are delighted to announce their support for Travel with IBD Ireland, a collaborative campaign between the Irish Society for Colitis and Crohn’s Disease (ISCC) and Takeda Products Ireland Ltd. The campaign, which launched last year, has been backed by the power of the inflammatory bowel disease (IBD) community who have called for change across Irish airports, rail stations and service stations.

Since May 2018, a massive 6,299 campaign emails have been sent to the bosses of major travel hubs by the IBD community, asking for the adoption of accessible toilet signage to highlight that not every disability is visible.

It is estimated that 40,000 people in Ireland are living with Crohn’s disease or ulcerative colitis, the two main forms of IBD. For many people living with these conditions, the sudden and uncontrollable need to use a toilet is an especially challenging and recognised medical symptom.  Some people also have stoma bags and need extra space or privacy to change these comfortably.

However many people living with IBD, and other ‘invisible’ disabilities, have faced stigma and discrimination when using accessible toilets because others perceive them to look well and therefore not entitled to use these facilities. For these people, the fear of being confronted for using an accessible toilet in public can be a major cause of anxiety, particularly when travelling.

Travel with IBD Ireland aims to reduce the stigma and give those living with IBD and other invisible disabilities more confidence to travel.

The former world champion kickboxer from Co. Sligo was diagnosed with Crohn’s disease in 2014 and is currently training for a place at the 2020 Tokyo Olympics.

“Throughout my sporting career, I have had to travel for competitions in Ireland and around the world. When I urgently need to use a bathroom, I may search out an accessible toilet facility. However I often get dirty looks and comments from members of the public who think I look “well”. This doesn’t just happen to me, it happens to many people in the West of Ireland who have an invisible disability and it can be very intimidating for us.”

Ireland West Airport is the second travel hub in Ireland to take action and support the campaign to improve the travel experiences for people living with IBD.

“The airport are delighted to have worked with the ISCC and Takeda Products Ireland on this campaign. We pride ourselves on creating a welcoming environment, but more importantly a stress free one for all of our community, and we encourage other travel providers throughout Ireland to raise awareness of invisible disabilities too. We are thrilled to support Travel with IBD Ireland as one of a number of initiatives we are working on to enhance facilities and remove fear and anxiety for people with hidden disabilities”, said Donal Healy, Ireland West Airport’s Head of Aviation Business Development, Marketing & Communications.

Fergal Troy, ISCC board member, who is living with ulcerative colitis, said: “The ISCC is so proud of our community for coming together to take action and ask for change across the travel industry. Since Travel with IBD Ireland launched last year, we have had fantastic engagement from our members, which has highlighted the impact that a small change in toilet signage can have on improving day-to-day travel experiences. We hope that these changes will be welcomed by other key transport hubs and public spaces where IBD patients are reliant on toilet facilities, to reduce the pressures they face.”

The ISCC and Takeda Products Ireland Ltd. will continue to engage with other major Irish travel hubs to encourage them to update their accessible toilet signage.

This campaign was developed and funded by, pharmaceutical company Takeda Products Ireland Ltd., one of the Irish Society for Colitis and Crohn’s Disease’s corporate partners. Niall will work closely with the team at Toyota on the development of new campaigns that credibly address real issues facing Irish families and motorists, with a concerted drive to creating a better future for all.