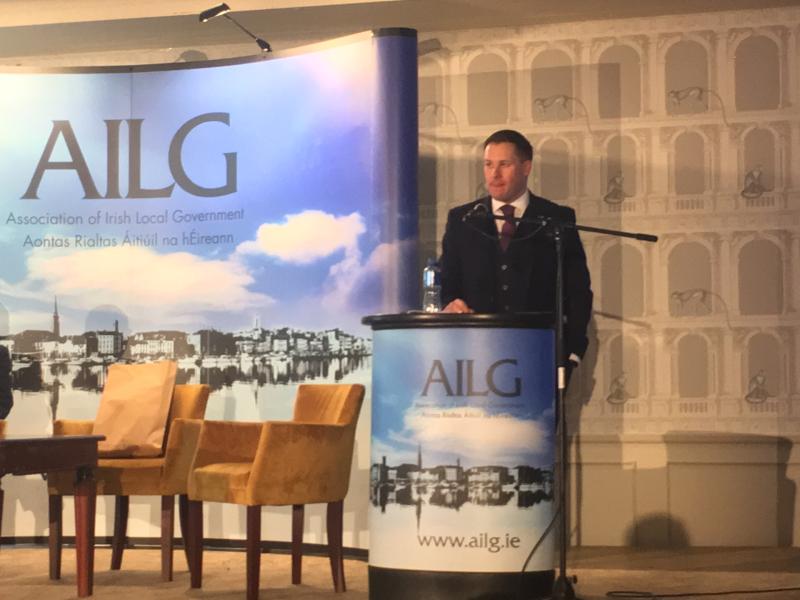 Daragh Feighery speaking at the recent AILG conference in Longford.

The AILG annual training conference was held in the Longford Arms Hotel on Friday, February 22, the second day of the event.

Day two kicked off with a presentation from the general manager of the Central Parcs Longford forest, Mr Daragh Feighery, who gave attendees an update on the progress of the development in his presentation titled ‘Center Parcs Ireland - Delivering €200m Investment to Longford’.

Located on a 400-acre site approximately 5kms from Ballymahon, Center Parcs has been described as a premium brand experience for all of the family. The company behind the development was established in the UK over thirty years ago and the Ballymahon location is the maiden Irish venture from the team.

Daragh noted that the vast majority of their guests have historically been families, though they also cater for other group types. He also explained that the site will also stay open all-year round.

Daragh informed the crowd that Center Parc villages attract over two million visitors annually. Also, 95% of all guests said they intend to return to one of the villages at some point in the future. Center Parcs also have a 96% occupancy rate.

“The current villages attract over two million visitors per year, across the five villages...The annual turnover is just over €400 million,” said Daragh.

“All of our villages have received a four-star rating on tripadvisor and we have a 4.5 star rating on Facebook reviews...96% of guests rate their stay as excellent or good,”

When choosing a location for the maiden Irish version of Center Parcs, Daragh said Longford was an obvious choice due to its prime location, transport links and the beauty of the site in Ballymahon.

“We have got fantastic transport and network links...It has been quite an appeal in our recruitment process.” he said.

“The forest is exceptional, where we are located. It has a lovely mixture of native Irish trees,”

“We have also had fantastic, local, positive support.”

Situated on a 400-acre forest site based near Ballymahon and acquired from Coillte, the Ballymahon Center Parcs project will have a capacity of 2,500 guest per break and it is expected that it will attract over 250,000 to Longford per annum.

“We expect to welcome up to 250,000 visitors to this area, each year in the coming years,” Daragh said.

The project will cost an estimated €233m in total and Daragh has confirmed that it is both on time and on budget, with the development due to open in the summer of this year. The team behind the build aim to employ least 1,000 people on their site and have already employed over 750 people in construction.

“It is the biggest single most investment in tourism in the state, which is exceptional.” Daragh stated.

Features at the Ballymahon development will include an outdoor subtropical paradise pool complex, a pancake house,a tree house, 470 high-quality lodges that can sleep between 4-8 people, 30 one-bed apartments, a sauna, off-road explorers for children aged 3-7 and over 100 indoor and outdoor activities. The spa will also cater for day guests, which presents a strong appeal for locals.

“It will be the biggest health spa in the country...You can also come as a day spa guest to us.”

The park will be centred around a single-storey building, which will house shops, restaurants and leisure facilities of the site. The development will also feature a man-made lake and beach on the property.

“This isn’t a new entity...We are going to bring an Irish slant to that.”

“Service is key for us...We are driven by standards...We drive continuous improvement and hold ourselves to that.” Daragh concluded.